Evaluating the Impact of the 2008 Beijing Olympic Games

USC symposium brought together scholars and practitioners who shared research insights on China's public diplomacy strategies and the impact of these games on perceptions of China's soft power resources and global attitudes towards a rising China. 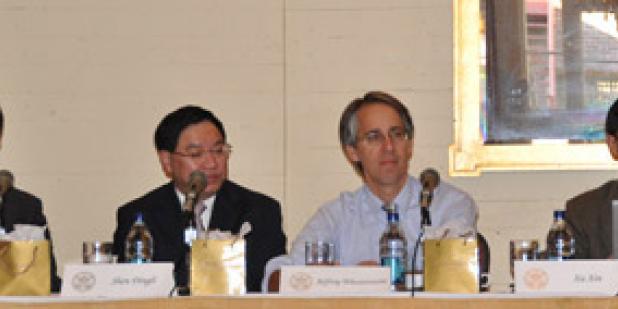 Susan Brownell heads the Department of Anthropology and Languages at the University of Missouri-St. Louis. Her first book, Training the Body for China, was based on her experiences as a member of the Beijing University track and field team in 1985-86, when she won a gold medal in the 1986 Chinese National College Games.  Her most recent book, Beijing's Games: What the Olympics Mean to China, provides the historical and cultural context for the 2008 Beijing Olympics.  She was the translator of the biography of China's senior sports diplomat and member of the International Olympic Committee (IOC), He Zhenliang and China's Olympic Dream.  In 2007-08 she was a Fulbright Scholar at the Beijing Sport University.  She collaborated with the Beijing City government on Olympic education programs in primary and middle schools, and was recently named a "capital city advanced Olympic individual" for her contributions. In the lead-up to the Games she was interviewed by nearly 100 journalists from more than 20 countries.

Baizhu Chen was educated at Fudan University and the University of Rochester. He is an economist and teaches finance and business in the USC Marshall School of Business. He heads the USC/Shanghai Jiaotong Global Executive MBA program in Shanghai and is a member of the USC U.S.-China Institute executive committee. Chen has published many articles on the political economy of growth, private investment, foreign currency markets, China’s financial markets, and monetary policy. His current research projects include these topics and Chinese savings patterns.

Kelly Crabb's is a partner at Morrison & Foerster, the international counsel for the Beijing Olympics Organizing Committee. He previously served as counsel for the Salt Lake Winter Olympics. He has extensive experience in Asia, Oceania, Europe, and Latin America. He is especially well-versed in handling broadcasting and other media rights. His responsibilities included overseeing contracts for licensed goods and working to curtail intellectual piracy. In addition to Olympics projects, Crabb has extensive experience in content rights acquisition and licensing; motion picture, television, Internet and other content production, financing, distribution and exhibition; music business contracts; commercial endorsements and advertising; live entertainment, sporting events and legitimate stage productions; and corporate mergers and acquisitions and joint venture transactions. His book, The Movie Business, was published by Simon & Schuster.

Shen Dingli earned his doctorate in physics and was a postdoctoral fellow at Princeton University. He is a professor of international relations at Shanghai’s Fudan University. He directs the university’s Center for American Studies and is and executive dean of the university’s Institute of International Studies. He is the co-founder and director of China's first non-government-based Program on Arms Control and Regional Security, at Fudan University. Prof. Shen teaches courses on nonproliferation and international security, and China’s foreign policy and carries out research on China-US security matters and nuclear ties, regional security and nonproliferation issues, and Chinese and American foreign and defense policies. He is a member of the USCI board of scholars and publishes widely.

Clayton Dube teaches history and is the associate director of the USC U.S.-China Institute. He chaired the panel on the economic impact of the Beijing Games.

Dan Durbin teaches in the USC Annenberg School of Communication and is a specialist on sports and the media. He chaired the panel on the role played by the press in the run up to and during the Olympics.

Four-time Olympic gold medalist, Janet Evans is recognized as the best female distance swimmer in United States history. In addition to her gold medals, she held six American records, three world records, 45 national titles, 17 international titles, and five NCAA titles. Evans’s records have been difficult to beat, one of her world records still stands. She won medals at the 1988 and 1992 Olympics and also represented the United States at the Atlanta Games in 1996, serving as one of the final torch carriers. Evans is also a member of the Trojan family, having studied here. Each July, USC hosts the Janet Evans Invitational, a major swim meet.

Patrick James is professor of international relations and directs the USC Center for International Studies. He chaired the panel on the international impact of the Beijing Olympics.

Larsen Jensen is also a USC graduate. As a swimmer, he distinguished himself in the freestyle. He earned a silver medal in the 2004 Athens Olympics and a bronze medal in Beijing. NBC’s interview with Jensen, now a soldier, is available here.

Dan Lynch teaches in the USC School of International Relations and is a member of the USC U.S.-China Institute executive committee. He’s the author of two books, Rising China and Asian Democratization: Socialization to Global Culture (2006) and After the Propaganda State: Media, Politics, and “Thought Work” (1999). He publishes extensively in academic journals and also in popular publications such as the Far Eastern Economic Review. Lynch is currently researching how Chinese political and intellectual elites expect China will, or should, change in the years leading up to about 2030. He is focusing on five interrelated issue-areas: domestic political processes and institutions; comprehensive national power and its implications for the country's role(s) in world politics; Party-state defense of cultural integrity and national identity under conditions of deepening globalization; development and diffusion of potentially transformative new technologies; and prospects for achieving sustainable development.

Jeff Owens teaches economics and economic history at Gustavus Adolpus College. His research and publications include work on returns to public investment in stadiums and sporting events. Among the most influential of these works is “Estimating the Cost and Benefit of Hosting Olympic Games: What Can Beijing Expect from its 2008 Games?” in The Industrial Geographer, and “Bread or Circus? The Ethics of Economic Impact Studies.” in Enterprising Worlds: A Geographic Perspective on Economics, Environments & Ethic.

Monroe Price heads the University of Pennsylvania’s Center for Global Communication Studies at the Annenberg School for Communication. In that role he works with a wide transnational network of regulators, scholars, and practitioners in Europe, Africa, Latin America and Asia as well as in the United States. Earlier, Price founded the Programme in Comparative Media Law and Policy at Oxford University and remains a Research Fellow there.  He also chairs the Center for Media and Communications Studies at Central European University. Price has served on the President’s Task Force on Telecommunications Policy and the Sloan Commission on Cable Communications (both in the 1970s) and on the  Carter-Sagalaev Commission on Radio and Television Policy (in the 1990s).  Price has also taught at UCLA, the Cardozo School of Law in New York City, and has visited at Cornell and the University of Sydney among other places. His most recent book Owning the Olympics: Narratives of the New China (co-edited, 2008). Price is a fellow of the USC Center on Public Diplomacy. He contributed a number of Olympics-related entries to the Huffington Post.

Stan Rosen teaches political science at USC and directs the USC East Asian Studies Center. He’s also a member of the USC U.S.-China Institute executive committee. Rosen is co-editor of the journal Chinese Education and Society. He teaches courses on Chinese politics, East Asian societies, Chinese film and film and politics. He has written or edited seven books, the most recent of which are State and Society in 21st-Century China (co-edited,  2004) and Chinese Cinema at a Hundred: Art, Politics and Commerce (co-edited, forthcoming). His current research involves public opinion surveys, higher education reform in China, the Chinese film industry and its overseas prospects, the prospects for

Hollywood film in the Chinese market, and value change among Chinese youth.

Barry Sanders is Chairman of the Southern California Committee for the Olympic Games. As Chairman, he led the recent effort to bid for the 2016 Olympic Games in Los Angeles. In September 2007 he received the Olympic Spirit Award from the United States Olympic Committee and the William May Garland Award from the Southern California Committee for the Olympic Games. He is also President of the Board of Commissioners of the Recreation and Parks Department of the City of Los Angeles and Chairman of the Los Angeles Parks Foundation. Following the 1992 riots, Sanders co-chaired Rebuild L.A., an effort aimed at improving inner-city conditions and ethnic relations. Sanders teaches about architecture as non-verbal communication and about public diplomacy at UCLA. Sanders recently retired as a partner with Latham & Watkins, where he practiced law for more than 35 years. During that time he headed the firm’s international practices group. He received the 2001 Lerned Hand Award for outstanding leadership in the profession. Sanders continues to be involved with a wide variety of community organizations, including those supporting the arts.

Barbara. Walkosz teaches communication studies at the University of Colorado, Denver. Her research and teaching focus on the role of mass media in society, political and civil discourse, and health communication. She has also been examining how China is represented in leading American media outlets and in the emergence of new media in Asia. She co-authored the study “Definition, equivocation, accumulation, and anticipation: America media’s ideological reading of China’s Olympic Games,” which was published in Owning the Olympics:  Narratives of the New China(2008).

Jeff Wasserstrom studied at UC Santa Cruz, Harvard, and UC Berkeley. He previously taught at the University of Kentucky, Indiana University, and UC San Diego and is now professor of history at UC Irvine. He is the editor of the Journal of Asia Studies and is the author or editor of nine books. His most recent books are Global Shanghai, 1850-2010: A History in Fragments (author, 2008) and China in 2008: A Year of Great Significance (co-editor, 2009). He has also consulted on two documentary films (most recently, Morning Sun) and he has contributed essays to a number of prominent newspapers and blogs. Wasserstrom is also a founder of and steadfast contributor to The China Beat, one of the liveliest China-corners on the web.

Geoffrey Wiseman is a former Australian diplomat who has also worked for the United Nations. He teaches in the USC School of International Relations and directs the USC Center on Public Diplomacy. He opened the conference.

Xu Xin teaches in the Department of Government at Cornell University and is associate director of the China and Asia-Pacific Studies (CAPS) program. Prior to joining the faculty at Cornell, Xu Xin headed the the China and the World Program from 2006-07. He was also formerly Associate Professor of International Relations in the Department of International Politics at Peking University in China, and Associate Professor of Asia Pacific Studies at Ritsumeikan Asia Pacific University in Japan. He was also a Visiting Research Fellow at the Japan Institute of International Affairs, an International Fellow at the Charles F. Kettering Foundation in the U.S., and a Postdoctoral Fellow on national security in the John M. Olin Institute for Strategic Studies at Harvard University. His current areas of interest include the Taiwan issue, East Asian security politics, Asian regionalism and multilateralism, and China’s foreign policy.

Air Quality at the 2008 Beijing Olympics
Counting Medals – 2008 Beijing Games
Will the Olympics Change China?
Video Interview with Hongping Li (USC coach and former Chinese Olympian)
From Olympia to Beijing: Olympic Torch Relay (interactive map)
Breathing in Beijing: Pollution a Problem for Olympians
Have You Seen Me Yet? Olympics Advertising
Diplomacy in the Sports Arena

Note: The thumbnail image for this story is of an MP3 player made in the shape of the Beijing Olympic Stadium, the so-called "Bird's Nest." It is produced by Kophee Technologies, Inc.