European views toward China are not uniform. Europeans recognize China's economic prowess and clearly favor continued ties, but majorities in much of Europe now have a negative view towards China.
May 13, 2022
Print 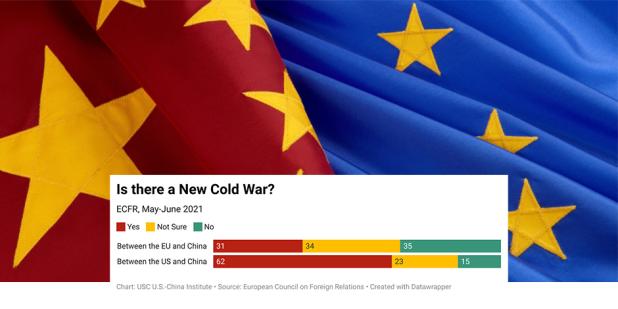 Europe is large and diverse. We don’t have data yet for spring 2022. The charts below are tied to polls carried out in 2012 to 2021. People in Western and Northern Europe tend to have less favorable views of China. Swedes are the most negative. Views tend to be more positive in Eastern and Central Europe. Serbs and Russians are the most positive. 91% of Hungarians are sure they are not in a Cold War with China, but last year the mayor of Budapest highlighted human rights issues in renaming streets around the not yet open Fudan University branch campus.

Economic frustrations drive some of the unfavorable views. Some of these are new. The European Chamber of Commerce in China complains that China’s covid-19 mitigation measures greatly disrupt production, distribution and sale of goods. Yesterday, the German Chamber of Commerce released a survey of its members. Many are under lockdown and for those permitted to operate, they are producing at 30-50% of capacity. This is a dramatic shift. In late 2021, 60% of German companies had reported improving conditions. Pandemic coping measures will eventually pass, but frustrations over protectionism and other issues remain.

A sign of the changing climate is that the 16+1 (Central and Eastern European nations and China) group won’t have a virtual leaders’ summit this year, though it’s the tenth anniversary of the creation of the group. This is partly fallout from the war in Ukraine, but is also fallout from 2021 sanctions China imposed on European Union lawmakers after the EU imposed sanctions on Xinjiang officials over the internment of Uyghurs and others. Another casualty of that standoff is the EU-China Comprehensive Agreement on Investment. After years of negotiations, it was signed in December 2020. Last May, however, the European Parliament froze ratification until China removes its sanctions on EU officials.

A year ago, most Europeans already thought that a Cold War was underway between their two biggest trading partners, China and the United States. Only a third, however, thought that the European Union was in a Cold War with China.

Whatever they may have felt about the U.S.-China rivalry or the issues between the EU and China, most surveyed by the European Council on Foreign Relations did not feel their own country was in a Cold War with China.

You may find last week's newsletter about about Chinese-European trade and investment and the flow of students from China to be of interest along with a talk by and discussion with Heribert Dieter, a political economist at the German Institute for International and Security Affairs.