Elizabeth Economy on the Global Impact of China's Environmental Crisis

Presentation by the Council on Foreign Relations scholar looks at the range of environmental challenges in China, governmental and non-governmental responses, and the potential for multilateral cooperation to address problems.
May 12, 2009
Print 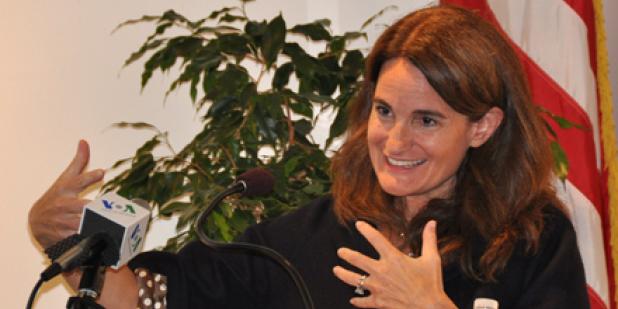 Elizabeth Economy began her talk by noting the enormous problems China confronts today. Of the thirty cities with the world's dirtiest air, twenty are in China. Two-thirds of China's farmland is affected by acid rain.

And China's rapid increase in motor vehicles, some 18,000 a day are added to the country's fleet, will only produce even greater amounts of air pollution.

The situation is even more grim in terms of water. To begin with, China's per capita water supply is only 25% of the world average. In North China the water supply is even tighter. Beijing must get water from a vast hinterland, because on a per capita basis, the city has only  3-4% of the world average. To make matters much worse, many of China's rivers and lakes suffer from serious pollution problems. In some cases this has produced massive algae blooms.

Economy noted that the economic downturn had led to the closure of more than 670,000 factories in China, especially in Southern China. That decline in economic activity has lead to clearer skies. But those and other factories will eventually reopen and pollution levels will return to normal.

In her talk, Economy went far beyond listing these challenges and others. She described the Chinese government's response to the problems. Chinese people are greatly worried about these problems which are increasingly covered in the press. Some have organized protests or have mobilized others into groups to monitor the environmental impact of various companies, especially foreign ones. Economy identified this as an especially hopeful sign, though in some instances officials have sought to curtail the activities of groups or especially dedicated individuals.

The World Bank, Asian Development Bank, and nations such as the United States have undertaken numerous joint initiatives with Chinese authorities. Some of these have yielded progress in addressing China's environmental problems and thus mitigated their impact on the world environment. Overall, however, problems are multiplying faster than solutions are being implemented.

****
Elizabeth Economy is C.V. Starr Senior Fellow and directs the Asian studies program at the Council on Foreign Relations. She's best known as the author of the prize-winning study The River Runs Black: The Environmental Challenge to China's Future. In addition, she's co-edited two books and written numerous journal and newspaper articles. She was educated at Swarthmore College, Stanford University, and the University of Michigan.