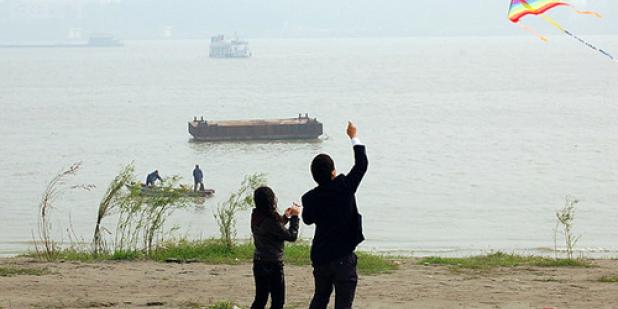 Despite an unprecedented rate of economic growth, Chinese people are less happy overall than they were two decades ago, reveals timely new research from economist Richard Easterlin, one of the founders of the field of “happiness economics” and namesake of the Easterlin Paradox.

In 1990, at the beginning of China’s economic transformation, a large majority of Chinese people across age, education, income levels, and regions reported high levels of life satisfaction. Sixty-eight percent of those in the wealthiest income bracket and 65 percent of those in the poorest income bracket reported high levels of satisfaction in 1990.

But life satisfaction has fallen dramatically among the poorest Chinese in the last two decades, according to the study, reflecting a growing unease about employment prospects and the dissolution of the social safety net.

The paper, appearing the week of May 14 in the Proceedings of the National Academy of Sciences, comes on the heels of the revelation that the Chinese government has not released an official report about wealth distribution in the country in more than a decade.

“There are many who believe that well-being is increased by economic growth, and that the faster the growth, the happier people are. There could hardly be a better country than China to test these expectations,” said Easterlin, University Professor and Professor of Economics at the University of Southern California.

“But there is no evidence of a marked increase in life satisfaction in China of the magnitude that might have been expected due to the enormous multiplication in per capita consumption,” Easterlin said. “Indeed people are slightly less happy overall, and China has gone from being one of the most egalitarian countries in the world in terms of life satisfaction to one of the least.”

Overall, life satisfaction among Chinese fell sharply in the early 1990s, bottomed out in the 2000s and has since recovered to about the same or slightly lower levels of individual happiness — despite the largest period of economic growth in history and a quadrupling of China’s GDP per capita. The analysis uses a wide range of data sets on self-reported life satisfaction and is the first to track happiness trends in China over a long period (from 1990 to 2010) rather than using simple comparisons of points in time.

The overall downward trajectory in life satisfaction among low-income people in China, the most populous country in the world, is similar to observed trends in the transition countries of central and eastern Europe, and in both areas reflects the emergence of substantial unemployment and the dissolution of the social safety net, correlating to declining satisfaction in particular areas of life such as household finances and health.

On one of the surveys included in the latest PNAS analysis, people in China were asked a general question about how they viewed their own health. In 1990, a majority of Chinese people in both the wealthiest bracket and the poorest bracket rated their health as “good” or “very good” — with only a four percentage point divide across income levels. By 2007, the divide in perception about personal health had grown to 28 points, driven by a decline in self-reported health among the poorest Chinese and an increase among the wealthiest.

“One may reasonably ask how it is possible for life satisfaction not to improve in the face of such dramatic per capita economic growth,” said Easterlin, a member of the National Academy of Sciences and the American Academy of Arts and Sciences. “There is more to life satisfaction than material goods, and there is an important policy lesson here for the Chinese government and policymakers generally: among ordinary Chinese people, especially the less educated and lower-income, jobs and income security, reliable and affordable health care, and provision for children and the elderly, are of critical importance to life satisfaction.”

Robson Morgan, Malgorzata Switek and Fei Wang, all of the University of Southern California, were co-authors of the study.

Morgan published an article on the topic in US-China Today.