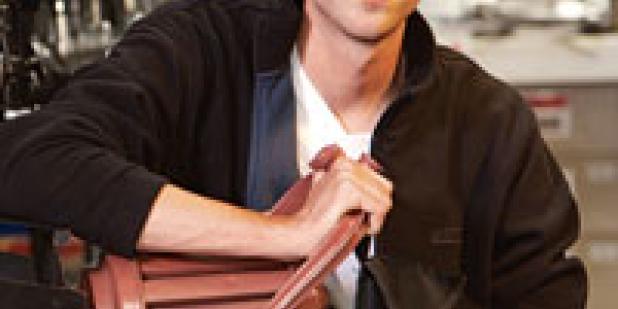 Days before Michael Tringe traveled to Beijing to make a documentary, he worried whether his subject might be pushing the envelope. The young filmmaker hoped to capture on video candid testimonies by Chinese gays and lesbians.

He knew it would not be easy to pull that off in a Communist state.

“Being gay is very, very taboo in China,” says Tringe, an MFA student at the USC School of Cinematic Arts. “Gay people can lose their flats and their jobs. It’s a touchy subject, and censorship is a huge issue.”

Tringe, 28, and five other USC film students went to China this summer to produce documentaries reflecting life in Beijing. The six-week trip was the second phase of a global exchange program between the cinematic arts school and the Communications University of China in Beijing. Accompanying the students were film school faculty members Lisa Leeman and Johanna Demetrakas, both accomplished filmmakers.

The year before, six students from CUC had traveled to Los Angeles for a five-week USC workshop taught by Mark Jonathan Harris, a three-time Oscar-winning documentarian and Distinguished Professor at the cinematic arts school.

The films from both summer workshops will eventually be broadcast on television in China and the United States. They also will be part of an interactive installation at the 2008 Summer Olympics in Beijing produced by the USC Annenberg Center for Communication’s Labyrinth Project.

“This program is about building relationships between students from two cultures,” says Harris, who co-founded the exchange.

Working in pairs – one USC student and one from CUC – each team produced a documentary about life in Los Angeles. All dealt in some way with issues of race and assimilation.

In Melt Me, recent immigrants revealed thoughts about loneliness and disillusionment. We Believe chronicled the lives of Chinese immigrants who had become born-again Christians. Unsung Hero told the story of Ming Qui, a kung-fu expert from China who moved to Hollywood and became a stunt double.

Graduate student Chera Kee MA ’06, who participated both years, recalls the first gathering of cross-cultural filmmakers. Only a few USC students knew any Chinese, and the CUC students had varying degrees of English fluency.

“The first day everyone was just sitting there very awkwardly,” Kee says.

But friendships soon blossomed. Tom Xia, who speaks Chinese, quickly bonded with Liam Zheng, his filmmaking partner from Beijing. Xia had lived in the People’s Republic as a child, before his family moved to Arcadia, California.

Xia and Zheng’s film, The Elephant in a Pink Tutu, documented the clash between longtime residents of Arcadia and the surge of Asian families moving into middle-income neighborhoods and erecting mansions.

An international relations major in USC College and a film studies minor in the School of Cinematic Arts, Xia says it was interesting to see his hometown from an outsider’s perspective.

Before this summer’s Beijing trip, the exchange program’s other co-founder, Marsha Kinder, gave the American students a rundown of what they could expect.

“Making a film with a Chinese partner is a great opportunity,” said Kinder, who is a University Professor based in the School of Cinematic Arts and international Ph.D. advisor at CUC. “It’ll take flexibility and negotiation.”

Tringe learned this first hand. When he arrived in Beijing, none of the Chinese students were willing to partner with him on his proposed project.

One student explained why: a documentary about gays, Tringe learned, would be viewed as “promotion of AIDS in China.”

Tinge didn’t want to go abroad and offend people. On the other hand, the reason he had decided to become a filmmaker was to “humanize all people in the world.”

In the end, he and his Chinese filmmaking partner decided to focus their documentary on the personal struggles of young professionals in Beijing.

“China is full of contradictions on the gay issue,” Tringe says. “Although it was not possible for me to directly express my perspective on this topic, I am incredibly grateful for the opportunity to travel to China and represent USC as a filmmaker.”

UPDATES: One of the filmmakers mentioned above, Tom Xia, is now at work producing and appearing in Xmas Without China. A Communication University of China story about the program, in Chinese, is available here.