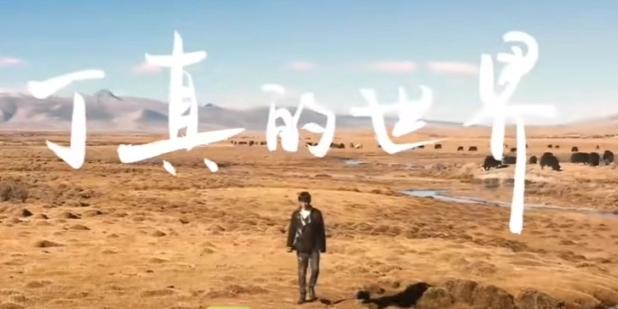 Dressed in gemstone earrings and traditional layered Tibetan robe, the young Tibetan boy with sun-kissed skin and messy hair smiled timidly at the camera, his figure striking against the clear sky and pastoral landscape of the Sichuan plateau.

Half a year later, Tenzing’s unique mixture of youthful innocence and pastoral persona continues to garner attention from millions of Chinese social media users, who are eager to relish his short but gratifying videos.

“I’m so tired of those formulative, makeup-heavy little fresh meat (xiao xian rou/小鲜肉) marketed by big media companies,” comments one netizen under a video of Tenzing Tsondu. “Tenzing’s so different. He’s so pure; I hope he can stay free from all the noise of society.”

“I wish I could marry him,” writes another netizen.

Tenzing’s fans have a spectrum of nicknames for him — “white horse prince” and “sweet wild boy,” to name a few. All monikers seem to converge on cosmopolitan social media users’ adoration of the pastoral, unadorned wilderness that Tenzing represents.

Almost half a year has passed since Tenzing Tsondu’s instant rise to social media fame, but media ‘hype’ over the nineteen-year-old boy persists. Now a dazzling idol, Tenzing is the center of attention in China’s burgeoning influencer market.

Tenzing’s immediate popularity is inseparable from China’s dynamic online fandom ecosystem (fenquan/粉圈). This network of media consumers is not only willing to, but also quite skilled at promoting its social media idols.

Like well-known K-pop idols or ‘little fresh meat’ actors in China, Tenzing has his own Weibo Super Topic — a designated page for fans to exchange news of their favored influencer. Each day, Super Topic rankings are updated, and fans attempt to bolster their idol’s ranking by posting on their Super Topic page as frequently as possible.

Fans also publicize their idols through comment generation (kongping/控评), in which they tirelessly post flattering comments under each new Weibo article or post related to their idol of choice. Such posting activities are often spontaneously organized by fan leaders, who curate highly formulative, positive posts in response to every PR crisis, and post daily assignments in shared chat groups for other fans to complete. In many cases, an idol’s public image is largely dependent on the labor and emotional investment of their fans.

Tenzing Tsondu’s personal social media accounts on Douyin and Weibo, created in November 2020 after Boge’s video was posted, gained two millions followers almost overnight. The platforms are now filled with fan art and glowing tributes to Tenzing’s newest photos and videos. In bickering about whether he should leave his hometown for his artistic “debut,” frenzied fans have made Tenzing Weibo’s top trending topic multiple times.

Reporters, entertainment agencies and advertising agencies have infiltrated Litang, Sichuan, where Tenzing spent his teenage years. A villager commented, “I have never seen so many journalists in my life.”

Compared to other well-known online celebrities and idols, Tenzing has collaborated with few commercial brands. Although Tenzing’s commercial success is apparent — he attended Shanghai fashion week and won the annual Influence Icon prize at “Bazaar Icons” party — his advertising primarily focuses on promoting local culture and tourism. He collaborates with the local government and National Culture and Tourism Bureau, and frequently live streams for the State Cultural Relics Bureau.

For fans, purchasing Tenzing-endorsed merchandise is one of the most necessary outlets for supporting their favorite idol. Those who engage in free-riding (baipiao/白嫖)  — failing to contribute to their favorite fan pages, either financially or through the manual labor of comment generation and upvoting (dabang/打榜) — are chastised by China’s young, hot-headed fans.

“How could Tenzing gain any media and commercial resources in the future, if his fans are all free riders who never try to boost his popularity or spend money on him?” complains one of Tenzing’s fans on his Weibo Supertopic. “Every day when I wake up or go to sleep, the first thing that I do is to dabang, and everytime when Tenzing livestreams, I donate as much as possible.”

The active, participatory culture of Chinese media consumers has cultivated a flourishing fan economy, where the mutually dependent relationship between fans and celebrities fosters more idol-fan engagement than previously possible. In this increasingly digitized age of new social media, fans are no longer passive consumers. Rather, they enjoy the agency to celebrate their idol’s achievements by tirelessly creating fan art, writing positive comments and buying celebrity merchandise. Arms length appreciation has advanced to the active shaping of an idol’s internet persona.

In the context of China’s dynamic fan ecosystem, media ‘hype’ over Tenzing Tsondu is perhaps closely linked to the snowball effect of his fan activities. While his sudden rise to fame could be incidental, this speaks powerfully to the role of fan economy in shaping idol-making in this new media era.

Navigating Fantasy and the Political Paradox of Tibet

A week after Tenzing Tsondu’s video went viral, he accepted a job offer in the local Litang County government. The position was tailored to Tenzing’s immense popularity — he became his hometown’s tourism ambassador. Many were initially confused, since Tenzing mentioned in an interview that he always dreamed of visiting Lhasa, Tibet’s capital and religious center. Some also thought that Tibetans like Tenzing only live in Tibet, not Sichuan, a province that is much less distant and wild-sounding than Tibet in the eyes of the average Chinese urbanites.

According to China’s Sixth Nationwide Population Census in 2010, Tibetans account for 0.45 percent of overall population. While education about ethnic minorities has been mandatory in China, the vast majority of Chinese netizens who are ethnically Han have relatively little knowledge of Tibet and its ethnic culture.

Once Tenzing Tsondu went viral, fans eagerly anticipated his next move. The possibility that Tenzing would be corrupted by a sometimes controlling Chinese entertainment industry worried fans who believed he should stay true to his pastoral roots. Some fans started a hashtag titled “Should Tenzing Tsondu leave the grassland to pursue his career?” The query trended number one on Weibo as fans tried to shield Tenzing from the corrupting influence of large entertainment corporations, who might lure him away from Sichuan and into a more urban lifestyle.

With Tenzing starting to livestream on Douyin since last November, social media users also animatedly discussed his broken Mandarin, referring to him as “the fish who escapes from nine years of mandatory education (九漏鱼),” a popular internet slang term used to describe less educated people. For weeks, books sent by enthusiastic fans flooded the village of Litang. While the messages come from a well-meaning place, they point to the prioritization of Mandarin over the Tibetan language: Tenzing is considered primordial and less educated, despite his eloquence in Tibetan.

Such waves of interest in Tenzing have raised the question of exoticization and cultural fetishization. In the dazzling audiovisuals of our digital screen, Tenzing stands as the exotic, primitive “other” representing Tibet’s distant culture, and perhaps the object of Han-dominated China’s colonial gaze.

This is even more complicated by his close affiliation with local Chinese government and official tourist bureau, as discussed earlier. China’s official spokesman for foreign affairs, Hua Chunying, has voiced multiple times about Tenzing’s widespread popularity in China. On November 29, 2020, she tweeted ” #DingZhen recently became a social media star after a photo of his bright, sunny and innocent smile had gone viral.”

This is the paradox of the representation of Tibet in contemporary Chinese popular media: on one hand, there is Tenzing’s growing popularity and interest in Tibetan life; on the other, there is the exoticization, colonial gaze, and lingering anxiety over the sovereign status of Tibet.

Many Chinese netizens mournfully compared the popularity of Tenzing with the death of Lamu, a female Tibetan influencer who was brutally set on fire and murdered by her husband. Weibo hashtags calling attention to this tragic incident were however taken down, starkly contrasting to Tenzing’s widespread media exposure.

“I don’t hate nor do I love Tenzing,” says a Weibo user. “But I am so heartbroken to realize how Lamu has a totally different fate from Tenzing despite their similarities, and simultaneously so happy to see Litang’s economy and living standards have blossomed because of Tenzing.”

Undergirding the happy surprise of Tenzing’s virality is a delicate political history between Tibet and Han-dominated mainland China.

The “Ding Zhen effect” is at the intersection of debate about internet idol-making, China’s capital-driven influencer market and contemporary Tibetan culture.

“There is no doubt that any adoration of the ‘alien’ culture or exotic symbols is a projection of one’s own desire,” says Zhang Fan, associate professor specializing in Sino-Tibetan relationship and historical anthropology at Beijing University. “But I would not be so pessimistic like Edward Said. When people encounter cultures or ethnicities that are different from their own … imagination is inevitable. Such imagination could be genuine, or particularly harmful. We can’t pretend we are not imagining — the work that needs to be done is to admit that in our curiosity and imagination [of other cultures foreign to us], there is a certain degree of distortion. And we need to reduce that distortion as much as possible.”

“Tibetan culture is now a global phenomenon,” Zhang says. “If you look at China, the intercultural exchange between Tibet and inland China started very early. There was a Princess Wencheng temple (文成公主塔) here at Litang. … My doctoral dissertation focuses on how during the reign of Emperor Qianlong in the 18th Century, the Chinese imperial palace was turned into a Tibetan Buddhist temple. There were tens of Tibetan Buddhist temples and thousands of Tibetan monks in Beijing at that historical moment.”

Indeed, in this increasingly digitized social media age, the “Ding Zhen” effect could be viewed as a means by which to continue this Sino-Tibetan exchange, or even as a conduit to discovering new possibilities of cultural exchange between Tibet and inland China.

According to statistics, the number of searches for Litang through China’s biggest travel agency Ctrip had skyrocketed by 620 percent since Tenzing Tsondu first went viral. What came with Tenzing’s sweeping popularity on Chinese social media was a flourishing of Litang’s local economy.

“Before Tenzing went viral, perhaps no one knew where Litang was, no one knew what Ganzi was, and no one knew what was going on with Khampa,” says Professor Zhang. “Now everyone knows at least one aspect of it. This aspect may be distorted, overgeneralized, or narrow, but it will also inspire at least the desire of a small group of people to truly understand it, and do something for it. I am still more optimistic about the potential Tenzing can bring to Tibet as a whole.”