Research competition winners from the USC School of Dentistry travel to China. 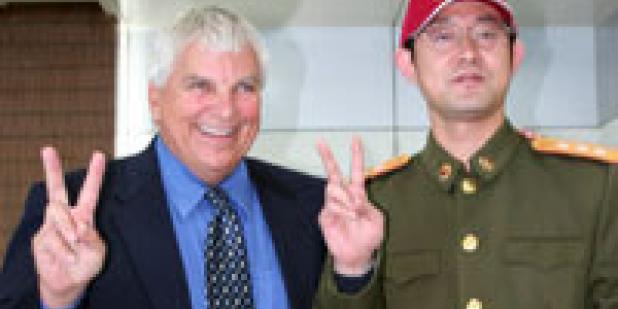 By Veronica Jauriqui
This article was originally published by the USC School of Dentistry in Jan. 2006.

For a handful of students, a trip halfway around the world proved that we’re really not that different after all.

Four of the first-, second- and third-place winners from last February’s Student Research Day, led by part-time faculty member Harris Done, enjoyed a ten-day whirlwind trip to China this past fall. With scholarships provided by alumni and companies like the DenMat Corporation and Western Dental, the students toured through the country’s major dental schools and presented their prize-winning research to attending faculty and students.

Throughout, they established strong connections with their Chinese peers—friendships, Done hopes, which will continue throughout their professional lives.

“It is important that our students have an experience like this,” says Done, who planned the trip and secured the scholarship funding. “The goodwill that we can spread on behalf of USC and the is invaluable.  And our relationships with schools around the , in particular, are especially important.”

Joined by nine other USC dental students who were interested in participating in the cultural exchange, the group toured through three of the country’s top five dental universities in , and .  Fourth-year doctoral dental student John Jerome sees the beginnings of important partnerships and the prospect for future collaborations.  Chinese and American students discussed research, shared their professional interests and exchanged e-mails, he says.

“A lot of the students and faculty were interested in what we had to present.  That sparked questions and opportunities that could lead into future projects,” he says. “I could put them in contact with people I know and vice versa.  We can continue to develop that relationship.”

While the groups could appreciate each other’s differences, just as important for Jerome and fellow fourth-year doctoral dental student Shama Currimbhoy was the opportunity to recognize their similarities.  “Professionally, we had many things in common,” Currimbhoy says. “We saw them waxing up their teeth in the labs and casting gold crowns.  It was really easy to make a connection because we could totally relate to each other.”

Whether they shared grief over the rigors of dental school or a love of the more secular, like the rock band Green Day, “We were all in this together,” she says. “It was surprising. It was pleasantly surprising."

Done hopes the students came away with a respect for the culture and complexity of a growing world power. “The economic explosion, the growth and the building is unparalleled,” Done says.  “Also is the friendliness of the schools, the faculty and the students.  That was the highlight: getting to see that they are all just dental students and faculty, and we are pretty much the same.”