Andrew Wu, president of the LVMH Group in greater China, spoke about the evolution of that country’s consumer culture at an event co-hosted by the USC Marshall School of Business and the USC Roski School of Fine Arts at Seeley G. Mudd Hall on April 23.
May 4, 2012
Print 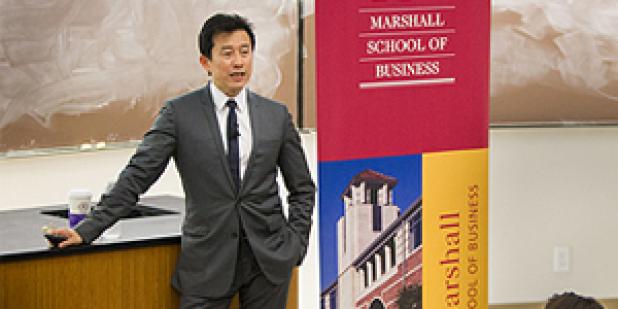 Originally published by USC News on May 4, 2012. Written by Alison Stateman

As a Shanghai native, Wu has witnessed China’s growing demand for luxury goods produced by a company responsible for the high-end brands Dior, Louis Vuitton and Moet Hennessy.

Wu outlined factors he said were needed to understand China. “Within just one generation, people went from riding on horseback to bicycles to cars,” he said.

In the 40 years since former President Richard Nixon visited China, Wu said the country has moved from a bamboo curtain to an open door. Not only do millions of Chinese travel overseas – a number expected to reach 100 million by 2015 – but income per capita has risen from under $100 U.S. dollars in 1978 to more than $4,000 in 2012.

“China came from an era when there was material deprivation for decades, and obviously there was economic scarcity,” Wu said. “Up to the early 1980s, these were typical scenes, [such as] people waiting in line to buy basic things, food in particular. Today you see people queuing up for Louis Vuitton bags in Shanghai. China collectively is very rich.”

While the country’s overall economy has slowed – because of a decrease in exports and a slowdown in government spending – consumer spending, particularly on luxury goods, is on the rise, according to Wu. McKinsey & Co., a global management consulting firm, said that China is on pace to top Japan as the world’s largest market for luxury goods. The company estimated an annual sales surge of 18 percent, which would translate to $27 billion by 2015 – a fifth of the worldwide total and up from $10 billion in 2009.

“Self-confidence has risen to an unprecedented level,” said Wu, before offering cautionary comments about doing business in China.

“It’s wrong to assume consumers are homogeneous, especially not within the younger group,” he said. “China is not just one country but many subcultures, with varying [cultural] tastes and likewise for consumer goods.”

While the top 10 cities for retailers remain stable, Wu said distribution is by far the biggest challenge of doing business in China.

Despite the challenges, Wu said that the country will remain a market of growingly sophisticated consumers.

“In China, luxury consumption in the past was totally unaffordable, reachable only for the very top rulers,” he explained. “Today we see extraordinary pent-up demand and explosive capacities for such consumption, but we already know that the new generations will become more demanding and selective.”