Clayton Dube opened the USC U.S.-China Institute's "Through Tinted Lenses?" conference, arguing that the images and attitudes Americans and Chinese hold toward each other and each other's countries matter. 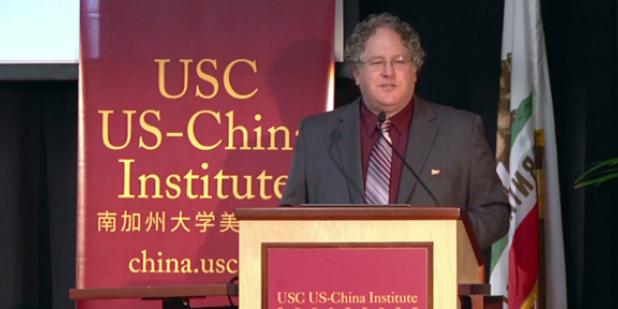 Clayton Dube has headed the USC U.S.-China Institute since it was established in 2006. Dube first lived and worked in China from 1982 to 1985 and has since visited often to carry out research, teach, or lead study tours. He teaches history and has received teaching awards at three universities.

In his presentation, Dube showed two commercials and two music clips. He wrote more about how politicians and their ad-makers "used" China in the 2012 election and about soft power in Talking Points. Click here and here for the election discussions and click here for the soft power note. Write to us at uschina@usc.edu if you'd like to be added to the Talking Points mailing list.

Clayton Dube opened the USC U.S.-China Institute's "Through Tinted Lenses?" conference, arguing that the images and attitudes Americans and Chinese hold toward each other and each other's countries matter. Those images, he said, affect the decision-making of individuals, of businesses, and of governments. Dube noted how in the 2012 U.S. election politicians and political ad-makers sought to exploit ideas voters had about China and went on to discuss images that Chinese television viewers in the 1980s got of the U.S. from shows such as Hunter and how the more recent television program Prison Break offered a rather different portrayal of the U.S. Dube noted that today, Americans and Chinese have access to information about each other from far more sources than ever before, yet don't seem to like or trust the other as much as we once did. He invited the other participants and the audience to join in the exploration of dominant images, how they are formed and change, and how they affect policies and behavior.