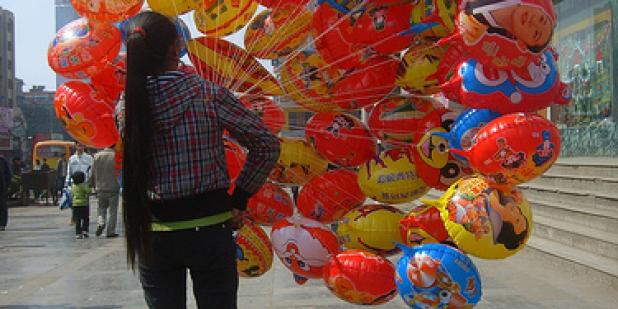 ON AN AVERAGE DAY in China during Chunyun, over 3.9 million people board trains for family reunions, despite the average daily carrying capacity at 2.4 million. Chunyun (春运), or Spring Festival Travel Season, refers to the 40 day period mass migration of people around the Lunar New Year when traffic jams major transport systems, the railroads in particular.

Chunyun is considered the biggest annual collective exodus in the world. In 2006 alone, the number of train passengers exceeded China’s population, transporting over 2 billion passengers around the country. This figure exceeds the number of passengers taken by UK in the entire year.

Railroad use is still considered the most popular and affordable type of transportation in China, appealing especially to the approximately 120 million migrant workers who find air travel too expensive and bus travel too impractical due to the distance.

Besides migrant workers, over 6.95 million of the 144 million train passengers in the 2006 period were students, fed by the combination of Chinese education reforms and winter break.

The trains are often so full to the point where “a common train has to transit 2,000 passengers, with only around 1,000 seating tickets," said Zhang Dazhi, an officer of Guangzhou Railway Group. One train conductor claims of a 1,000 carrying capacity train taking in over 1,800 people.

Indeed, the availability in space within the packed train is so minimal that lavatory access is limited due to mobility. A China Daily report states that supermarkets claim a “50% increase in sales” during this season, partly due to the fact that passengers “are forced to go without relieving themselves for the whole journey.”

To cope with the situation, transportation authorities in 2006 laid on an additional 711 L-series trains (临客) each day. Security is also tested during these times as officers seek to secure passenger luggage and to retain order. A reported 1,100 police patrolled crowds at Beijing West Railway Station during 2006, the busiest railroad station during the period.

Many also take advantage of the situation. Due to the limited availability of tickets, “scalper organizations” (票贩子) often seize tickets in mass immediately after they are put on sale to sell them at hugely inflated prices at the stations. Others create fake tickets, taking advantage of the inadequate number of servicepeople, many fatigued by the overwhelming number of passengers, and try to board for free. Nonetheless, the government has been cracking down on such activity.

The Chunyun period is also highly sensitive to weather. Any slight delay due to weather often trickles to major problems in traffic flow. In Beijing’s West Railway Station during 2006, delayed passengers combining with incoming passengers in an already overcrowded station created even more chaos, this coupled by the below freezing temperatures in the evening.

Chunyun has and will continue to be one of China’s biggest transportation challenges. It has, in a sense, become a test of the government’s ability to administer, said Liu Shinan of China Daily.  For 2008, the Ministry of Railways announced it plans to add 300 temporary train trips to the schedule and to freeze ticket prices. It expects 170 million people to ride the rails during Chunyun this year.

Lawrence Gu is an intern at the U.S.-China Institute. Among his projects is an ongoing examination of the role of transportation in 's development.