A longtime academic and professional partner to many experts, students and employers in China, the USC Davis School of Gerontology was featured in Ta Kung Pao, the oldest active Chinese-language newspaper in China. 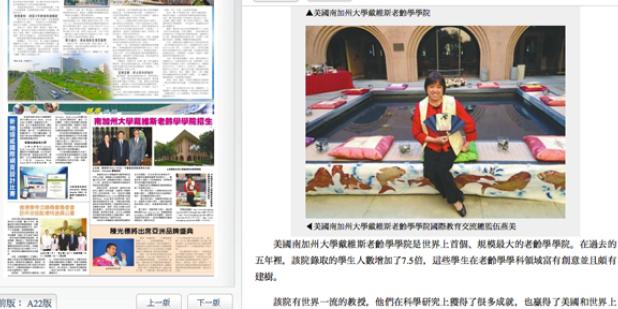 Originally published by USC News on September 14, 2014 by Jonathan Riggs.

A longtime academic and professional partner to many experts, students and employers in China, the USC Davis School of Gerontology was featured in Ta Kung Pao, the oldest active Chinese-language newspaper in China.

“An education from USC Davis is a true global passport,” said Ng, a native of Hong Kong. “It will allow graduates to provide life-changing services, support and initiatives for their clients and their country — every country.”

Meeting with a several officials, including Du Yubo, administrative vice minister of education, and Li Shenming, vice president of the Chinese Academy of Social Sciences, USC Davis administrators pointed to Asia as the area of the world where the aging revolution will have the most immediate and dramatic impact.

“By 2050, there will be more than 400 million Chinese citizens over the age of 60,” Cohen said. “Asia represents enormous gerontological challenges and opportunities, and we are proud to further our goal of improving the quality of life for all the world’s older adults of today, as well as of tomorrow.”