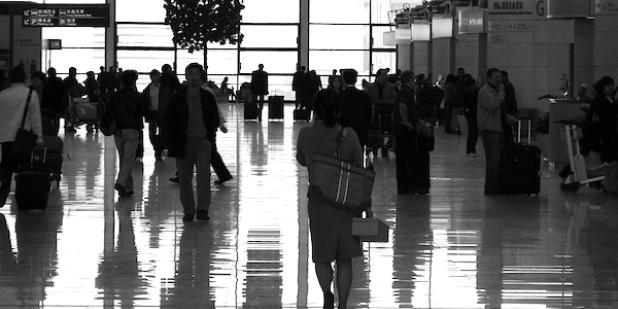 The rate at which Chinese domestic air travel is growing has slowed however, with this year’s rate more than a whole percentage point below the 2010 growth rate of 14.8%. Other domestic travel options, specifically high-speed railways, are carrying more and more passengers. In 2011, high-speed rail is expected to divert 15,600-71,200 travelers a day away from airlines. That fewer passengers may result in a daily revenue loss between US$154,000 and US$703,000 (about RMB1-4.5 million).

By 2010, there were 175 civil transport airports in China according to CNN, nine more than in 2009. 55 additional airports are to be built by 2015, totaling 230 across the country. The CIA World Factbook, however, rates China at 15th in the world for number of airports recognizable from the air with a total of 502. This number includes airports used across all industries, including military and non-operational strips, and is tallied without regard to size and capabilities. The U.S. by contrast is ranked 1st in the Factbook with 15,079 airports.

Chinese airlines had 1,597 aircraft in operation in 2010, including planes used for international travel. This number is expected to grow to 2,600 by 2015, an addition of over half an airplane per day. The U.S. had a total of 230,000 aircraft in 2008, including all aircraft, military, shipping, international, or otherwise.

Domestic passenger air travel totaled 44% of the aviation market in China in 2010, as opposed to the U.S., which totaled 70%. Military travel, shipping and miscellaneous air travel composed the remaining 56% of the industry. China’s three leading airline companies are Air China, China Eastern Airlines, and China Southern Airlines, together controlling 80% of the domestic passenger market in 2010. The U.S. is slightly more diversified with 75% of the market share divided between the top 10 companies. Delta, Southwest, and American Airlines placed at the top respectively for American market share in 2010.

China’s domestic air travel peaks during the country’s national holidays, including the Spring Festival in late winter and the Golden Week holidays of May 1 and October 1. While prices spike during these holidays, ticket costs can vary greatly day to day around the country. For example, an economy flight from Beijing to Wuhan in 2010 varied anywhere between US$46 (RMB298) and US$122 (RMB790) within a given month. Summertime is peak travel season in the U.S., along with the weeks around Thanksgiving, Christmas, and New Year.

The most heavily traveled air routes in China are between Beijing, Shanghai and Guangzhou. The most traveled route in the U.S. for 2010 was Chicago to New York, followed by Los Angeles-San Francisco and Los Angeles-New York.