The plastics industry is global and the task of cleaning it up should be global too.
April 15, 2021
Print 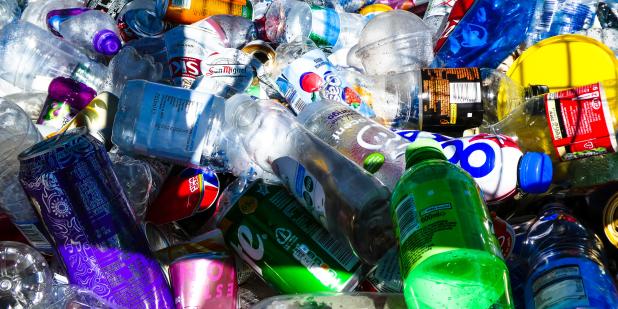 A new paper reports there is nearly 1,100 tons of plastic, equivalent to over 150 elephants, floating in the atmostphere above the western U.S. These microplastics, which are smaller than 5 millimeters, end up in our soil and air. Plastics aren't just an issue for the U.S., they affect the environments of places where plastic consumption doesn't approach our own. The charts below highlight plastic production, consumption and recycling.

America generates more plastic waste than any other country—twice as much as #3 China. Campaigns encourage Americans to recycle plastics (despite the reality that most plastic can't be practically recyled). Still most people don't know what happens to their milk jugs after they go into the blue bin. For many years the biggest U.S. export to China was waste for recycling. As China's economy boomed in the late 1990s, especially with entry into the World Trade Organization in 2001, the shipping containers full of cheap goods sent to the U.S. were filled up with waste for the return trip. At their peak, plastic sold for $300 a ton. Only 9% of all discared plastics are set aside for recycling, but until recently 70% of the recylced plastic in the U.S. was sent to China.

This changed three years ago when China's Operation National Sword, banning the importation of 24 types of scrap, went into effect. Plastic imports into China dropped 99% from pre-ban levels. Once-recycled products are now ending up in landfills and incinerators. Some U.S.  municipalities have halted their recycling programs. The top importers today of U.S. plastic for recycling are Canada and Malaysia. Some  Chinese recycling firms plan to open processing plants in South Carolina and Alabama.

China is the leader in plastic production, accounting for almost a third of global production. Some companies there are shifting to biodegradable alternatives. Yum China Holdings, owner of KFC and Pizza Hut, plans to reduce its plastic footprint through such products. Greenpeace argues that just switching to biodegradable plastics won't solve the problem because such plastics require special conditions, not typically found in nature, to decompose. The sheer scale of our existing plastic mountains and our continuing consumption of plastic in products and packaging makes the problem both pressing and requiring national and international efforts to address.

USC's Joshua Goldstein has spoken about plastic recycling in China and recently published his book on the history of waste and recycling in Beijing.