The USC Viterbi School of Engineering is to partner with Tsinghua University, China’s top technical university. 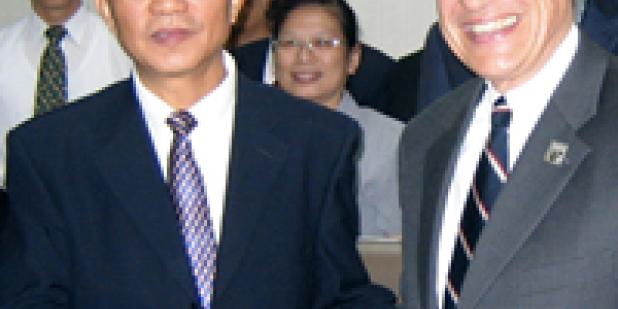 By Angus McColl
This story was originally published by USC News.

The aim was to build bridges of collaboration between Tsinghua and USC faculty, establish a strategic partnership for future collaboration in research and education, and facilitate exchanges between student and faculty.

At the workshop, Tsinghua and USC Viterbi School faculty showcased their relative strengths through briefings by the faculty members. USC Viterbi faculty met Tsinghua students interested in graduate studies at a reception held the second day.

The Chinese government recently announced an initiative that will send up to 1,000 fully funded top students each year to graduate programs at prestigious foreign universities.

“We learned firsthand that Tsinghua students are enthusiastic to study abroad,” Yortsos said. “Many of them have very positive views of doing so at USC if the opportunity becomes available to them through the new Chinese Government initiative.”

The workshop was organized by Raghavendra and Li Jun, executive vice dean at Tsinghua.

Sun Jiguang, dean of Tsinghua’s School of Information Sciences and Technology, and Yortsos signed a Memorandum of Understanding calling for future exchanges of students and faculty as well as collaboration on research and education topics of mutual interest. They agreed that the partnership would be mutually beneficial, and both expressed optimism and excitement over the opportunities for future cooperation.

The Tsinghua-USC partnership was initiated by Deng FengMS ’93, a respected engineer, entrepreneur and venture capitalist who is an alumnus of both USC and Tsinghua. Deng worked in the Silicon Valley at Intel and Juniper Networks before co-founding Netscreen Technologies with two friends. He received the 2002 Ernst & Young Entrepreneur of the Year Award for the Northern California region and is listed in the company’s Entrepreneur’s Hall of Fame.

Deng returned to China to co-found Northern Light Venture Capital with three other Chinese entrepreneurs. The company quickly has become one of China’s top venture capital companies, and Deng maintains close ties to the electronics industry in Silicon Valley.

“Tsinghua produces the very best undergraduate engineering students in China, while USC produces some of the very best graduate engineers in the world. I owe so much of my success to the combination of these two opportunities. I want to expand this possibility to many other Tsinghua graduates while also developing faculty cooperation,” Deng said at the memorandum signing. “I am so happy to see this partnership come together.”

In addition to the fast-paced workshop, participants bridged cultures through visits to the Great Wall of China, the Summer Palace, the Forbidden City and Tiananmen Square.

The trip had some additional bridge building:
• Dapkus went to dinner at the famous Peking Duck restaurant with a former Ph.D. student who traveled from Shanghai;
• Kuo met with three graduating Tsinghua students slated to begin research at USC under his direction this fall, courtesy of the new Chinese Government initiative;
• Qin golfed with former colleagues from Beijing; and
• Dean Yortsos made calls on key officials of the Research Institute for Petroleum Exploration and Development and the China National Offshore Oil Corp. to explore possible research and education collaboration with USC.

“The workshop was a big success, but it was just a starting point,” Yortsos said. “The bridges started at Tsinghua will be very useful for the envisioned traffic in collaboration and exchanges.”

During the summer, the USC Viterbi School hosted eight undergraduate students from Tsinghua who worked as research interns.