Brought by broadcast and print journalists into American homes, the images and ideas of the 1989 Beijing demonstrations and their violent suppression had tremendous impact on perceptions of China. 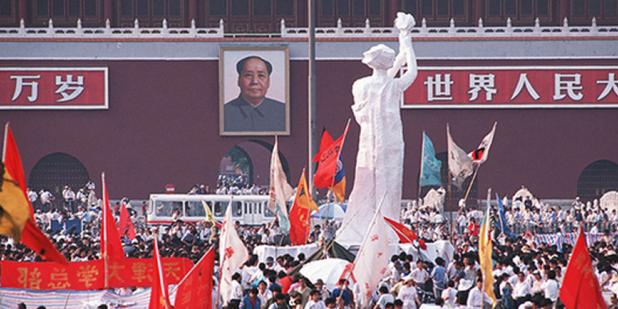 This segment in the Assignment: China series focuses on the coverage by American news organizations of the dramatic events in Beijing in 1989. Students marched in cities all over China, but it was the demonstrations in China’s symbolic center, Tiananmen Square, that captured the attention and imagination of people worldwide and especially in the United States.

Click here to see a list of public screenings of Assignment: China -- Tiananmen Square. Video from some of those making presentations after the screenings is included.

Since the restoration of formal diplomatic ties in 1979, which included a triumphant visit to the U.S. by Deng Xiaoping, ties between the two countries had improved significantly. Deng’s policies of economic reform and opening to the outside world had invigorated China and won the admiration of many. Two signs of how interested Americans were in China and how optimistic they had become about China’s future were that a) twice, for 1978 and for 1985, Time Magazine’s editors selected Deng Xiaoping as their “person of the year,” and b) the Gallup Organization survey of American “favorability” toward China in February-March 1989 found that 72% of Americans saw China in a favorable light, an increase from 64% in 1979. Trade was increasing steadily, Americans were visiting China, and increasing numbers of Chinese were coming to the U.S., mostly on business or to study.

Economic gains and greater openness in China led many, and especially university students, to increased awareness of the outside world and rising expectations for life in China. Many expected that with economic development, China’s political system would change to permit them greater freedom and to hold officials more accountable to those they governed. Some joined protests, most notably in winter 1986-87 when protests erupted in 17 cities. Deng Xiaoping and his fellow elders held Communist Party General Secretary Hu Yaobang for having failed to effectively battle “bourgeois liberalization” among young Chinese and intellectuals and compelled his resignation, replacing him with Premier Zhao Ziyang.

By 1989, Zhao and Premier Li Peng had sought to cool China’s economy and impose an austerity program. Inflation was high, more people had been charged with official corruption, and rumors abounded that the families of party-state leaders were unfairly cashing in on their connections. Unrest in Tibet boiled over in March, and Tibet Party Secretary Hu Jintao imposed martial law there.

When Hu Yaobang died on April 15, students seized on the opportunity to remember him and to criticize his successors. Chinese leaders were divided on how to handle the protests that ensued. What followed was an extraordinary seven weeks where large numbers of Chinese in dozens of cities marched and demonstrated to express their grievances and to call for change. As the political center of China, most of the world’s attention was focused on the protests there.

The American press corps in China had grown since the first journalists arrived with the establishment of diplomatic relations, but it was still relatively small compared to today. Covering China remained (and remains) complicated and difficult. In December 1986, for example, two television crews were detained and had their videotape confiscated as they attempted to cover student demonstrations. This segment of Assignment: China focuses on the stories of journalists who struggled to understand what was happening in Beijing that spring and to help Americans get a sense of the issues and forces at play. We hear from them about the political, cultural, physical, and technological challenges of covering the demonstrations, how they were being seen by the larger society, and the response of the party-state.

The press corps grew as the protests continued, especially as the mid-May Soviet Union-China summit meeting drew near. The upcoming meeting between Mikhail Gorbachev and his Chinese counterparts would be the first meeting between the leaders of the Communist giants in three decades. Gorbachev, of course, had made headlines worldwide with his perestroika (restructuring) and glasnost (openness) reforms. Assignment: China -- Tiananmen Square shows how Gorbachev’s arrival and his departure affected the ability of television networks to broadcast news via satellite directly from the square and how reporters used early mobile phones to report from China. But we also learn how essential less-cutting edge technology, such as bicycles, was as well.

For the participants, for the correspondents, and for audiences, an overriding question from April to June 3 was “how will this end?” For many outside China, the ending is most of what is remembered.

The documentary shows how journalists sought to make sense of the party-state’s restraint and why the April 26 People’s Daily labelling the unrest as “a grave political struggle facing the whole Party and the people of all nationalities” nor the declaration of martial law on May 20 did not end the protests. When the armored personnel carriers and tanks did roll and armed soldiers were sent in, several of the journalists interviewed in Assignment: China were there. We hear how they sought to document the extent of the violence and we learn the story behind the “tank man” image that has come to symbolize the demonstrations and their violent end.

We learn how journalists knew what they reported, but also how their values, expectations, or sources caused them to overemphasize some things and to miss others. And we hear from U.S. Secretary of State James Baker how the immediacy of the coverage meant that the administration needed to react in real time.

Twenty-five years have passed since students and others waved banners calling for greater freedom and official accountability in Tiananmen Square. The patriotism and optimism of the demonstrators and the violence that ended the demonstrations deeply moved people worldwide. Those seven weeks have had a profound influence on what Americans and others think about China. Assignment: China – Tiananmen Square tells how those stories were brought to American audiences.