Two of the most experienced and insightful Chinese and American diplomats discuss the state of U.S.-China relations, the dangers of worsening ties, and the impact of U.S.-China relations on the wider world. The conversation will also explore possible avenues to improve ties and lessen international volatility. 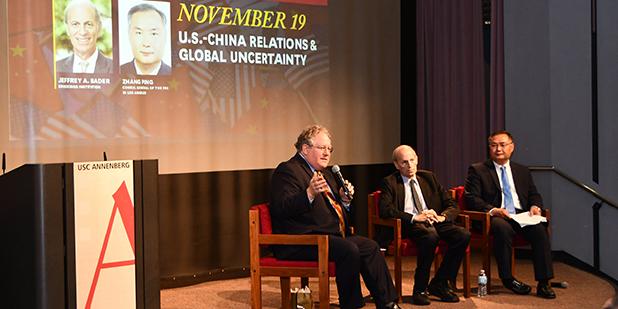 At USC on November 19, 2019, Ambassadors Zhang Ping and Jeffrey Bader discussed the state of U.S.-China ties. Topics covered included how the U.S. and China managed to move forward from the 1970s, past the trauma of June 4, 1989 and into the 21st century. You can see their discussion below and at our YouTube channel. Both emphasized the key role of Deng Xiaoping and pragmatic policies. Ambassador Zhang blamed the downturn in U.S.-China relations on forces within the U.S. that are fundamentally opposed to China’s rise and are using tensions in the U.S.-China economic relationship to push an anti-China agenda. Ambassador Bader argued that China has changed and that has produced new dynamics in U.S.-China relations. He noted that China’s far richer and more powerful militarily than it was and that its actions in the South China Sea indicate a new assertiveness. Bader also said that China under Xi Jinping has become more ideological and harder line in its domestic policies. The two ambassadors offered significantly different assessments of Chinese aims and policies in Xinjiang and toward Hong Kong. It was a lively discussion in front of a large and diverse audience.

Ambassador Jeffrey A. Bader is a senior fellow and founding director of the John L. Thornton China Center at the Brookings Institution. He served in the U.S. government for three decades. He was Deputy Assistant Secretary of State for China, Hong Kong, Taiwan and Southeast Asia in the 1990s and as Assistant U.S. Trade Representative in 2001, Dr. Bader led the U.S. side in the final negotiations leading to China and Taiwan joining the World Trade Organization. Dr. Bader served on the National Security Council and was President Obama’s principal advisor on Asia from 2009 to 2011.  He wrote about that experience in Obama and China’s Rise: An Insider’s Account of America’s Asia Strategy.

Prior to serving as the Consul General of the People's Republic of China in Los Angeles, Ambassador Zhang Ping was China’s top representative in Fiji from 2015 to 2017. He has held a variety of top positions in the North American and Oceanian Affairs Office of the Ministry of Foreign Affairs. Consul General Zhang served in the embassy in Hanoi and as counselor at the embassy in Canberra. From 1988 to 1992, he served as deputy consul general and consul general in New York and from 2006 to 2011 he was a minister-counselor at the embassy in Washington. Zhang then served as CPIFA vice president from 2011 to 2015. Zhang previously joined a conversation with his colleague Zhao Weiping on the role of Chinese consulates.

[A December update is below.]

The event was sponsored by the China-United States Exchange Foundation and the USC U.S.-China Institute. USCI director Clayton Dube moderated the discussion.

[Dec. 13, 2019 updates] Major document leaks have revealed Chinese policies and practices in Xinjiang. The first was published by the New York Times. The 403 Chinese government documents examined for that story include policy speeches by Xi Jinping to show no mercy in moving against those suspected of extremist thought. Other documents stress that detainees are not criminals, but are not free to leave and that family members should understand that their own actions could affect their relative's circumstances. The second big document leak was published by the International Consortium of Investigative Journalists. Dozens of journalists working for seventeen media organizations in fourteen countries combined to verify, translate and report on the operation manual for the camps and intelligence briefings for those involved in the "Integrated Joint Operation Platform, a mass-surveillance and predictive-policing program."

A week after Ambassadors Zhang and Bader met at USC, voters in Hong Kong participated in district council elections. In a landslide, seventeen of the Special Administrative Region's eighteen districts came under the control of pro-democracy candidates (CNN report | BBC report | SCMP video). On Saturday Dec. 7, protestors turned out for the largest demonstration in several weeks (Bloomberg | HKFP photos). More than six thousand demonstrators have been arrested since the protests began in the spring.

On Dec. 12-13, there were many reports that the U.S. and China had reached a "phase I" agreement in their trade conflict. Details were murky, but it appears that tariffs threatened to take effect on Dec. 15 would not and that existing tariffs would be reduced. China pledged to increase agricultural imports. While the Trump administration described it as a historic breakthrough, most analysts disagreed. The agricultural purchases were offered more than a year ago and the limited increase in access to the Chinese market was already in the works. Scott Kennedy at the Center for International and Strategic Studies wrote, "in the short-term China and Xi Jinping are the clear winners. With only limited concessions, China has been able to preserve its mercantilist economic system and continue its discriminatory industrial policies at the expense of China’s trading partners and the global economy." Nonetheless, the "trade truce" is seen as welcome news by many. 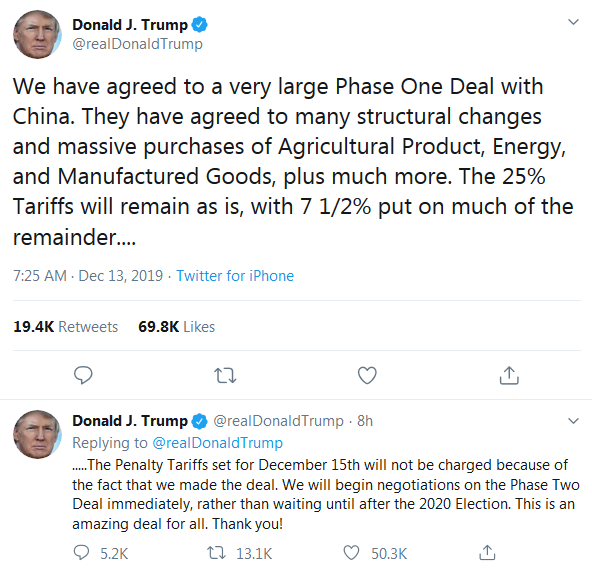