Officials from China's National Committee on Aging discuss the well-being of Asian elders with representatives from USC schools.
September 27, 2006
Print 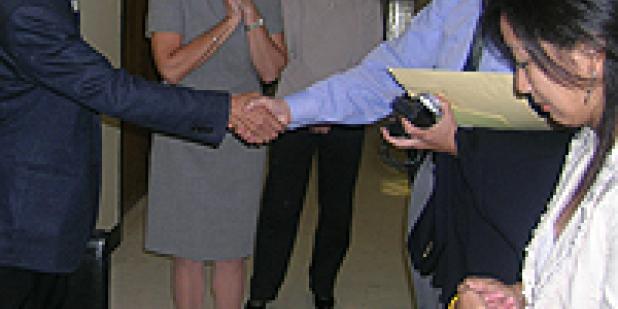 By Athan Bezaitis
This article was originally published by the USC News Service on Sept. 27, 2006. Photo: Zhao Baohua, vice director of the China National Committee on Aging, shakes hands with Jon Pynoos, professor at the USC Leonard Davis School of Gerontology.

The USC School of Social Work hosted a group of nine officials from the China National Committee on Aging.

The visitors were welcomed Sept. 25 to the USC Leonard Davis School of Gerontology by Zhen Cong, a Chinese-speaking representative of the office of professor Merril Silverstein, who conducts research on aging in China.

“We were happy to welcome such an important delegation,” Silverstein said. “We hope to collaborate in the future.”

Silverstein’s most recent article, published in the current issue of the Journal of Gerontology, discusses the psychological well-being of elders in rural areas of China whose working-age children have migrated to urban centers.

Zhao Baohua, vice director of the China National Committee on Aging, was holding a copy of Silverstein’s work in his hand when he addressed the small group that gathered at the USC Davis School library.

“USC has been well-known and admired in China. We feel very honored to be here,” he said.

The China National Committee on Aging performs scientific research on aging in order to suggest policy for the Chinese government. In spite of a population of approximately 1.3 billion people, China has declining fertility rates because of family planning policies in urban centers that encourage people to have as few children as possible. This phenomenon created a four-two-one family structure (four grandparents, two parents and one child) with powerful ramifications on the future of Chinese society.

“There is a great burden with fewer children to support elders,” said Cong, a Ph.D. candidate and contributing author to Silverstein’s study.

A comparable population shift toward elders also exists in the United States with the coming of age of the baby boomers – the generation of people born between the years 1946 to 1964. The oldest members of this group are turning 60 this year and make up approximately one-third of the population.

“Both the United States and China have similar interests,” said Iris Chi, professor of social work and gerontology, who holds the Golden Age Association Francis Wu Chair for the Chinese Elderly.

“The meeting was a real success,” Chi said. “The committee will be sending more delegates representing the research staff to come at the end of November.”