Acting on a Chance Encounter

Inspired by brief meeting in China, a USC alumna creates a fund for international study. The $500,000 gift will provide scholarships for foreign students coming to USC and Trojans who want to study abroad.
August 18, 2004
Print 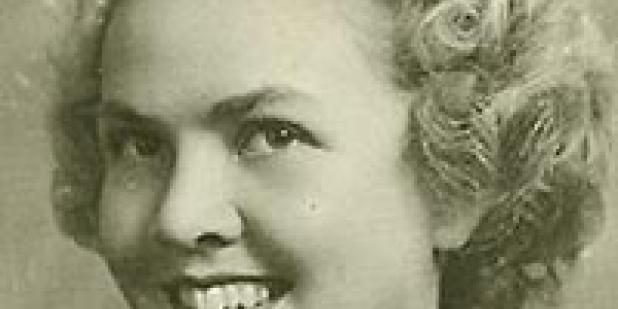 Above photo: Helen Graffen Donegan (Class of 1949) in her Alpha Phi sorority photograph.

By Katherine Yungmee Kim
Originally published on August 18, 2004 in USC Chronicle and USC News and Features

Fifteen years ago, Helen Graffen Donegan (B.A., ’49) was shopping in Shanghai when a young student approached her, wanting to practice his English. Her late husband Jim, fond of Chinese cutlery, asked the boy to lead them to a reputable shop. The boy offered to pay for the knives in Chinese yuan if the Donegans gave him the equivalent in American dollars.

The Donegans agreed. In order to study abroad, the young boy needed to pay for some of his university exams in dollars. Eventually, the student – Dennis – came to the United States and earned his M.S. at Brigham Young University and is now studying for his second master’s in finance and economics at Columbia University.

“Dennis is the inspiration,” Donegan (who prefers to be called Helen) said of her decision to create the Helen Donegan Fund for International Study at the USC College of Letters, Arts and Sciences. This $500,000 gift annuity will provide scholarships for international students who wish to study at USC, and for USC students who want to study abroad.

Seeing how hard Dennis worked to get through school, she said, was the impetus behind helping other students who share his ambition. Her dedication to global travel and her alma mater were also major factors.

Helen was born and raised in Walnut, Calif., where her family had a citrus ranch. Inspired by a high school teacher who was a USC alum, she was accepted into the class of 1949. She majored in physical education.

After teaching for a few years in Whittier and Riverside, Helen took her first cruise in 1957. “I thought I’d died and gone to heaven,” she said. She loved it so much her friends asked her, “Why don’t you just go and get yourself a job on the ship?”

So she did. For five years, she sailed from Los Angeles to Australia and back, on a paradisiacal route that included stops in New Zealand, Tahiti, Roratonga and Pango Pango. All in all, she traveled that route over 25 times but didn’t stop there.

Helen’s love for the sea took her and Jim all around the world. They hosted 10 world cruises, among many other separate trips. The trip to China fostered the relationship with Dennis that continues to this day. A mohair tapestry that graces the head of her bed is a souvenir from a trip to Mombasa. But her favorite place, she said without a moment’s hesitation, is Antarctica, which was evident given the proliferation of penguin paraphernalia around her house.

“The icebergs and scenery are ethereal,” she said, adding that the hikes into the tundra to be with the penguins were incredibly special. “It’s nature at its all-time best.”

Her next dream destination is the Arctic. “I want to see the polar bears,” she said.

Helen has been extremely active in the desert chapter of the Trojan League. Six of her classmates – “All Forty-Niners,” she said proudly – have kept alive a Round Robin letter after all these years. Three of them were Helen of Troy and one was a Mortar Board president. They represented four different sororities; Helen was an Alpha Phi.

“I had such a guilty conscience about it,” said the indomitable Trojan, shaking her head at the forced connection with rival schools. “It took me the longest time in the world.”

Teng Biao grew up in a rural village before attending law school at Peking University and focusing on human rights. While his early successes were lauded by the Chinese government, he was later abducted and tortured by police. He fled to the United States with his family and now teaches at Hunter College in NYC.

Professor Margaret Lewis examined the US government's use of criminal prosecutions to address a broad "China" threat is at tension with the criminal justice system.

The USC U.S.-China Institute presents a webinar with David Zweig to look at how tensions between the United States and China have impacted scientific collaboration and research.