For Women's History Month, our new graphics illustrate women in positions of leadership in the U.S. and China.
March 18, 2021
Print 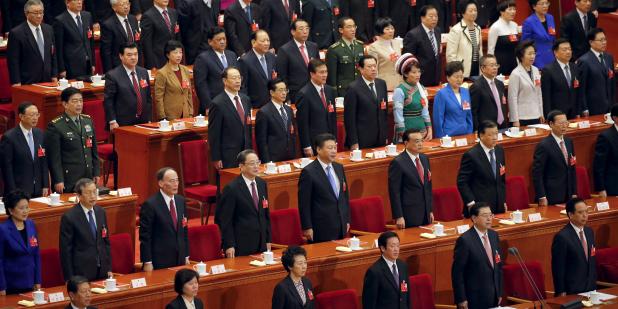 Mao Zedong famously said, "Women hold up half the sky." Maybe so, but they are underrepresented in most of the world's governments. Half of the global population is female, still the Inter-Parliamentary Union found women comprise just 26% of world parliament members and only 6% of heads of state and government.  The share of women in the U.S. and Chinese national governments are in the middle of the pack globally, ranking 67th and 86th respectively.

Of course, the U.S. and China have different governance systems. Powers are divided in the U.S. In China, duties and roles are separate, but power is concentrated in the Chinese Communist Party. At the pinacle of the CCP, the seven member Politburo Standing Committee is all male. Sun Chunlan is the sole woman in the twenty-five member full Politburo. The Party controls each component of the government. For example, CCP members comprise roughly three-fourths of the National People's Congress (NPC) that convened this month. Members of the Poliburo Standing Committee serve as chair of the Central Military Commission, state president and chair of the National Security Commission, premier of the State Council, chair of the NPC, chair of the advisory body, the Chinese People's Political Consultative Conference, and secretary of the Central Discipline and Inspection Commission.

Princeton's Rory Truex told the South China Morning Post there is a glass ceiling in Chinese politics for women where, "They’re not really given access to real positions of power." The current Standing Committee of the Central Political Bureau has no women members compared to President Biden's cabinet that is half female (additional posts not yet confirmed). Neither the U.S. nor the People's Republic of China has been headed by a woman, though the U.S. has just elected a woman, Kamala Harris, as vice president, and Nancy Pelosi continues as the Speaker of the House of Representatives, a position she first held 2007-2011. Four Chinese provinces or regions have a woman as party secretary, governor or chief executive. Seven U.S. states currently have female governors.