Presentations by Tom Hollihan, Zhan Zhang, and Patricia Riley on how American, Chinese, and Japanese media discuss the islands and the conflict over them and the impact such representations have on prospects for resolving the dispute.
November 19, 2014
Print 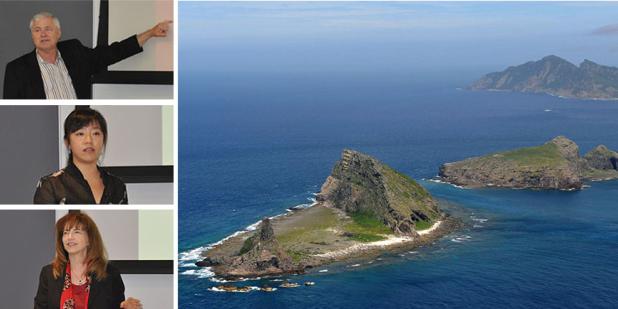 Small uninhabited islands in the East China Sea have attracted great attention in recent years. Japan, China, and Taiwan all claim the islands as part of their sacred national territory. Tom Hollihan, professor of communication studies at the USC Annenberg School, put together a team to examine how American, Chinese and Japanese media and textbooks treat the islands and the dispute over them. Two members of that team joined Prof. Hollihan in presenting key findings of their study to a USC U.S.-China Institute audience in October 2014.

Hollihan discusses the historical background to the conflict and outlines how

American media have discussed the issue. He begins by noting that American television hasn’t covered the dispute, but that major newspapers have done so in a fashion that has China upsetting regional stability. Zhan Zhang 张展, a scholar from China working in Switzerland at the Institute of Media and Journalism at Università della Svizzera Italiana. Zhang notes how coverage varied across legacy media, including how protests within China were covered and how the op-eds by Chinese ambassadors abroad were used within China's media to represent international support. Annenberg Prof. Patricia Riley analyzes the role these representations play in the countries’ media diplomacy efforts and discusses potential scenarios where the situation becomes more dire or where tensions can be reduced. The speakers examine legacy media, social media, and government statements.

The book these presentations draw upon is The Dispute Over the Diaoyu/Senkaku Islands: How Media Narratives Shape Public Opinion and Challenge the Global Order (Palgrove, 2014). It is available from the publisher and most retailers.

Click here for a 2012 Chinese government white paper on the islands. It opens with, “Diaoyu Dao and its affiliated islands are an inseparable part of the Chinese territory. Diaoyu Dao is China's inherent territory in all historical, geographical and legal terms, and China enjoys indisputable sovereignty over Diaoyu Dao…. Japan's occupation of Diaoyu Dao during the Sino-Japanese War in 1895 is illegal and invalid.”

Click here for the transcript of the Barack Obama and Shinzo Abe joint press conference in Tokyo in April 2014. Pres. Obama said, “We stand together in calling for disputes in the region, including maritime issues, to be resolved peacefully through dialogue.  We share a commitment to fundamental principles such as freedom of navigation and respect for international law.  And let me reiterate that our treaty commitment to Japan’s security is absolute, and Article 5 covers all territories under Japan’s administration, including the Senkaku Islands.”