The U.S.-China Institute and PEN America hosted the West Coast launch of the PEN America report on social media in China, Forbidden Feeds. 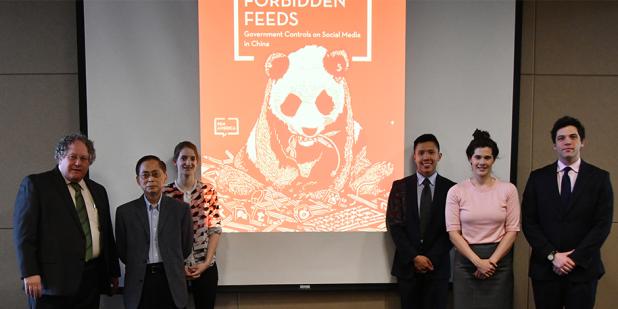 The report helps demonstrate how, under the tenure of President Xi Jinping, the Chinese government’s control over the social media space in the country has tightened and expanded. The Chinese government is wielding its ability to monitor and censor as a way to control civic discussion online, to prevent dissatisfaction and dissent, and to protect the reputations of its highest members while ensuring that influential social media users are cut down to size.

PEN America’s report includes an examination of how such censorship impacts the lives of Chinese writers and artists for whom social media is often a creative and financial lifeline. For writers and other creatives, the censorship of their social media presence is an erasure not just of their opinions, but of their work and their creative expression. The vague and broad nature of China’s censorship rules means that the “red lines” of posting or conversing on social media are continually drawn and redrawn, and authors and bloggers are increasingly faced with the dilemma: self-censor, withdraw from the conversation, or leave the country. At a time when the line between a writer’s official work and his or her social media presence is increasingly blurred, censorship and surveillance of social media means that there is no safe outlet for uncensored expression.

Liz Carter is a Chinese translator and author of Let 100 Voices Speak, an account of social dissent online in China and its censorship in the Weibo era. She is currently pursuing a PhD in Chinese linguistics at UCLA, where she researches criminal trials in the PRC. Carter was co-author of The Grass-Mud Horse Lexicon (China Digital Times, 2013) and former managing editor of Tea Leaf Nation.

Tuenyu Lau is the Kiriyama Professor of Asia Pacific Studies in the Center for Asia Pacific Studies at the University of San Francisco.  He was the founding director of the Master of Communication in Digital Media Program at the University of Washington in Seattle. He’s been a visiting scholar at the USC U.S. - China Institute and a visiting professor at UCLA and in China and Hong Kong.  He received a bachelor’s degree in journalism from The Chinese University of Hong Kong, a M.A. in communication from Stanford University, and a Ph.D. in mass media (integrating the study of journalism, telecommunication, and advertising) from Michigan State University.

James Tager is the senior program manager for PEN America’s Free Expression Programs. Tager previously worked with the International Commission of Jurists – Asia & Pacific Program, first as a Satter Human Rights Fellow and subsequently as an international associate legal advisor. Before that, he was a 2013–2014 Frederick Sheldon Traveling Fellow, researching civil society responses to the developing human rights framework within the Association of Southeast Asian Nations. He has lived and worked in Thailand, Myanmar, and Cambodia. Tager holds a BA from Duke University and a JD from Harvard Law School and is licensed to practice law in the state of New York.

Amos Toh currently serves as legal advisor to the United Nations’s special rapporteur on the right to freedom of opinion and expression, and is a lecturer at the UC Irvine School of Law. He coordinates the special rapporteur’s multi-year project to establish a UN-endorsed framework for protecting digital rights, and has contributed substantial research and drafting to major UN reports on content regulation in the ICT sector. Toh was formerly Counsel and Katz Fellow at the Brennan Center for Justice, where he authored Overseas Surveillance in an Interconnected World (2016), and Foreign Law Bans: Legal Uncertainties and Practical Problems (2013). His writing has also been featured in media outlets such as The Washington Post, The Guardian, Al Jazeera, and Salon. Toh is a graduate of the NYU School of Law (LL.M., 2012), and the National University of Singapore School of Law (Bachelor of Laws, 2012).