Video: Christopher Rea and Henry Jenkins on how vaudeville differed between Hollywood and China

Christopher Rea and Henry Jenkins explore comic convergences on the silver screen, focusing on filmmakers who embraced a vaudevillian aesthetic of visceral comedy and variety entertainment. 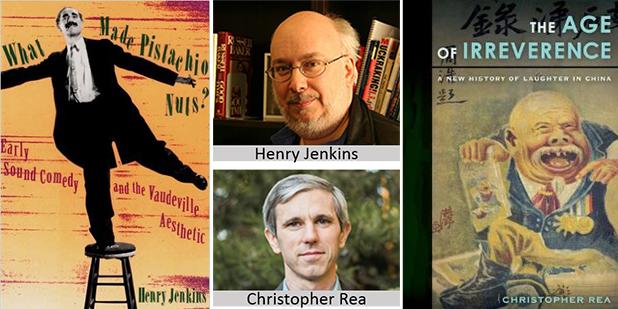 March 2017 update: The Association for Asian Studies awarded Christopher Rea its Joseph Levenson Prize for the top book on post-1900 China. The award announcement included: "The Age of Irreverence offers a fresh perspective on the late Qing and early Republican era, focusing on the use of humor. The book balances with levity the better-known accounts of this period as steeped in ponderous intellectual debates. Rea taps into previously ignored sources, honing on parodic verses and essays, fantastic novels, cartoons, amusement halls, and photography, to show how these and other materials produced 'cultures of mirth.' As the book demonstrates, the discourse of irreverence, manifested in specific practices, took part in forming and challenging claims to modernity."

Rea and Jenkins spoke at USC on March 2, 2016; original introduction: Slapstick performance and trick cinematography dominated early global cinema. People climb into boxes and are tossed around; they jerry-rig all manner of dwellings and conveyances; they leap out of windows, crash through doors, dangle from clock towers, and slide down staircases; they appear and disappear like ghosts. But what did such visual gags look like in films made in Shanghai, as opposed to Los Angeles? How did filmmakers from different cultural traditions share or adapt comic tropes—and which ones? And how did their comedy change with technology, such as the advent of sound cinema, or with politics, war, and revolution?

This conversation between Henry Jenkins, a media scholar who works primarily on American popular culture, and Christopher Rea, a cultural historian of China, will explore comic convergences on the silver screen, focusing on filmmakers who embraced a vaudevillian aesthetic of visceral comedy and variety entertainment. It will offer a guided tour of cinematic comedy in comparative perspective, drawing out resonances between Hollywood and Chinese films from the 1910s to the 1950s. During the conversation, Rea and Jenkins will show clips from a variety of films, from early works by Charlie Chaplin to the short-lived era of cinematic satire in Mao’s China.

About the Speakers
Christopher Rea is Associate Professor of Asian Studies and Director of the Centre for Chinese Research at the University of British Columbia. He is author of The Age of Irreverence: A New History of Laughter in China.

Henry Jenkins is Provost Professor of Communication, Journalism, Cinematic Arts and Education at the University of Southern California and is author of more than fifteen books about various aspects of American media, including What Made Pistachio Nuts?: Early Sound Comedy and the Vaudeville Aesthetic and Classical Film Comedy.

This event is co-sponsored by the USC Department of East Asian Languages and Cultures, the USC Annenberg School for Communication and Journalism, and the Department of Asian Studies of the University of British Columbia.