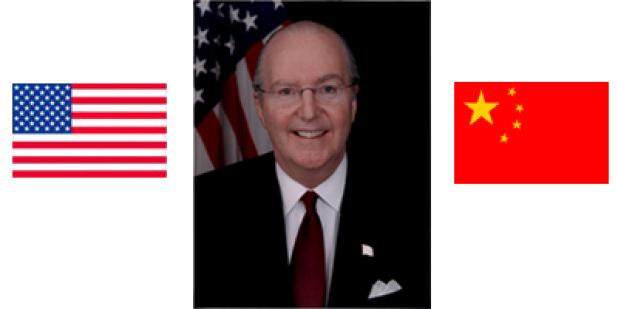 The United States is the world’s lone superpower. China is a rising great power. Daily headlines remind us how the U.S.-China relationship is shaping the 21st century.

To view either of the videos below, please click on the "play" button on the video's control bar.

"Let me clear, the United States welcomes an emergent China taking its place on the world stage."
-- Amb. Randt

Clark T. Randt, Jr. was appointed U.S. Ambassador to the PRC by President George W. Bush in 2001, just following an  international headline-making incident involving the collision of a U.S. Navy reconnaissance plane and a Chinese jet fighter. During this tenure, Ambassador Randt has worked to mend ties, address trade frictions, secure compliance with World Trade Organization standards, and to foster cooperation on a wide range of critical issues including battling terrorism, halting the proliferation of nuclear weapons, protecting the environment, and defending intellectual property rights.

Since 2001, China has undergone a leadership transition and is facing enormous problems, most recently political unrest in and near Tibet. Some worry that those domestic challenges could affect China’s foreign relations. Ambassador Randt will take on these and other questions in offering his candid assessment of the current state of U.S.-China relations.

Before becoming ambassador, Clark Randt spent thirty years as an Asia-based lawyer doing business in China. He headed Shearman & Sterling’s China practice, is a member of the New York and Hong Kong bars and is a recognized expert on Chinese law. He previously served in the Beijing embassy as First Secretary and Commercial Attache (1982-84) and is a former Governor and First Vice President of the American Chamber of Commerce in Hong Kong.  Randt earned his bachelor degree at Yale University (1968) and his juris doctor degree at the University of Michigan (1975).

Ambassador Randt’s thirty-minute lecture will be followed by a twenty-five minute question and answer period. For additional details on the 2008 Herbert G. Klein Lecture, including information on how to RSVP, directions and parking at USC and the lecture location, see the general information page.

This presentation is the 2008 Herbert G. Klein Lecture. Herbert G. Klein is a USC graduate and a University Trustee. He headed two major media organizations, Metromedia and Copley Newspapers and was a longtime advisor to Richard Nixon. Mr. Klein was President Nixon’s communications director, accompanying him on his historic 1972 visit to China. He was editor in chief of Copley Newspapers, a chain of nine daily and eight weekly newspapers, whose flagship paper is the San Diego Union - Tribune. Since retiring from the Copley Press, Mr. Klein has continued to research and write on a great variety of topics, including how China is changing. In Making It Perfectly Clear, Mr. Klein drew on his experience working in five presidential campaigns to discuss the love-hate relationship between politicians and the press. J. Stapleton Roy, former U.S. Ambassador to China, delivered the 2007 Herbert G. Klein Lecture at USC as the Keynote Presentation of the U.S. China Institute's inaugural conferece, "The Future of U.S. – China Relations." Video of the lecture and conference information can be viewed here.

World Journal, April 22, 2008, "Randt: The Health of the US-China Relationship Lies in the Taiwan Issue"

World Journal, April 22, 2008, "Americans must confront China's rise in the world: From product safety to counter-terrorism or air quality, American lives and Chinese are intertwined"

Singtao via Sina.com, April 22, 2008, "Huge Changes in China these past decades, Ambassador Randt offers a comprehensive look at China-US relations"