The Trojans will be the first American performers in the event’s history. 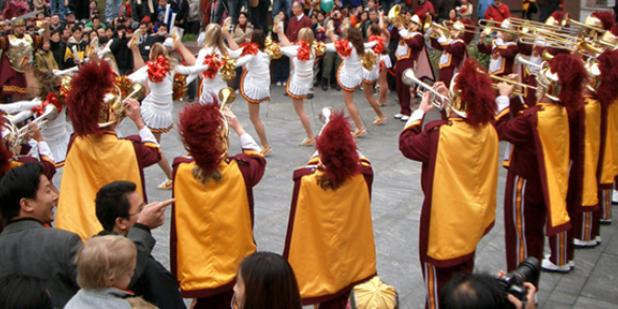 The USC Trojan Marching Band will cross the Pacific to help Macao celebrate the Chinese New Year at the upcoming Parade for Celebration of the Year of the Monkey.

Featuring more than a thousand performers, the annual spectacular winds along the Macao waterfront, entertaining millions of viewers both locally and via an international television broadcast on Feb 10. The band is one of seven groups from outside China invited to participate in the event by the Macao Government Tourism Office. The Trojans will be the first American performers in the parade’s history.

In addition to the parade, the band will perform a concert in front of Macao’s iconic Ruins of St. Paul’s — a UNESCO World Heritage Site — on Feb. 9. Upon arrival in Asia, the band will be greeted by members of the USC Alumni Association of Hong Kong and hosted for lunch.

This will be the sixth visit to China by the Trojan Marching Band in the past 13 years. In 2003 and 2004, the group performed in Hong Kong’s Chinese New Year Parade. In summer 2004, the Trojans toured Shanghai, Xi’an and Beijing, where they played on the Great Wall of China. Since then, the band has returned to Shanghai twice, first in 2010 to perform for USA National Day at the city’s world expo and again in 2014 for the opening of the first Old Navy store in China.

Director Arthur Bartner, now in his 47th year leading the organization, has taken band members to 18 countries on six continents. Wherever the Trojans have roamed, it is with the knowledge that they are ambassadors for both their university and country.

“Any time you represent the United States, it’s a special experience for the Trojan Marching Band and its students,” Bartner says. “It’s a great honor to be selected to be the first American performing group to appear at the Macao Chinese New Year’s Parade and to share our musical talents with the citizens of Macao.”

The Parade for Celebration of the Year of the Monkey will be televised in Los Angeles on Jade LA on Feb. 13 at 8:30 p.m.