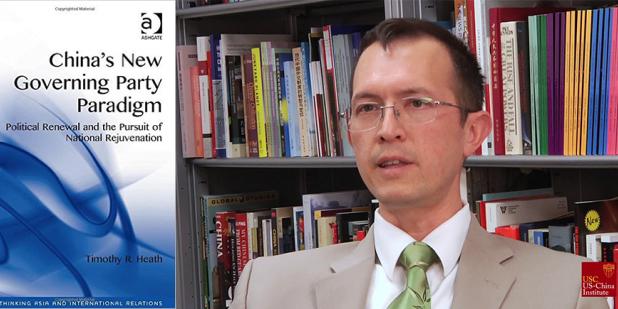 About the book:
For the first time since its founding in 1921, the Chinese Communist Party (CCP) has adopted a new paradigm for its role in China. Abandoning its former identity as a 'revolutionary party', the CCP now regards itself as a 'governing party' committed to meeting the diverse needs of its people and realizing China’s revitalization as a great power. To enhance its ability to realize these aims, the CCP has enacted extensive political and ideological reforms. Central to that effort are changes to how the party develops and oversees strategy and policy.

Few studies are available on the CCP's adoption of this new identity and of its political implications. This book remedies that oversight by explaining the historic context, drivers, and meaning of the governing party paradigm. It explains how adoption of this paradigm is transforming the processes through which the CCP develops strategy and policy. Furthermore, it differs from many other books in that it is the first to derive its analysis primarily from the study of authoritative Chinese sources. The book also provides an extensive array of helpful references, including chronologies, lists of major strategy documents, a glossary, and more. Accurately understanding the CCP's new role as a governing party requires a firm grasp of how China’s leadership formulates, documents, and implements strategies and policies to improve its governance and further the nation’s rejuvenation. This book provides such valuable information in one handy volume.

About the author:
Timothy R. Heath is Senior International and Defense Analyst at the RAND Corporation and a recognized expert on Chinese strategy and political-military topics. He served for five years as the senior analyst in the United States Pacific Command (USPACOM) China Strategic Focus Group and has over fifteen years of experience in the US government as a specialist on China. Mr. Heath has authored many articles and a book chapter on topics related to Chinese security and political issues. He earned his MA in Asian Studies from George Washington University and speaks fluent Mandarin Chinese.

Reviews:
'Tim Heath's timely exploration of the Party governing goals coincides with burgeoning attentiveness to Xi Jinping and China's aspirations. His study offers a window on the last decade of Communist Party steps to revitalize its role in Chinese society while maintaining its determination to retain power over a massively evolving society. Heath's study will appeal to a wide array of China observers.' --Cynthia Watson, The National War College, USA

'Tim Heath has produced an immensely useful resource for those seeking to understand what makes the Chinese Communist Party (CCP) tick in the 21st Century. He presents a wealth of primary source materials and provides trenchant accompanying analysis to illuminate the key drivers and political context behind the CCP's pursuit of a strategy of national rejuvenation. Highly recommended for students, scholars, and practitioners.' --Andrew Scobell, Senior Political Scientist, RAND Corporation

'Timothy Heath's book should become required reading for anyone concerned with the governance and politics of the People's Republic of China. Based on meticulous research in the Chinese language, the book provides an exceptionally thorough understanding of the relationship between the Communist Party's evolving ideology and the domestic and international policies pursued. --'Robert L. Suettinger, The Stimson Center, USA

Timothy Heath gave a talk on his book at USC on January 29, 2015. Click here to watch the full presentation.