The USC U.S.-China Institute invites educators to join us for free one-day workshop.

On campus parking, breakfast, refreshments, and lunch will be provided. 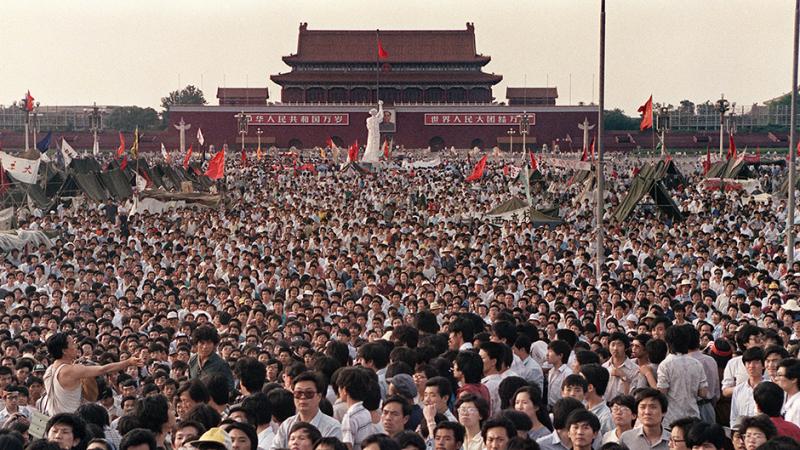 The Tiananmen Square protest swells to over one million. AFP: Catherine Henriette.
What happened in Beijing and dozens of other Chinese cities in spring 1989? What propelled first students and then the masses of Chinese into taking over thoroughfares and occupying city squares? What made these demonstrations the topic of conversation worldwide? How did the government ultimately end them and how has it suppressed discussion of the demonstrations and their suppression in the twenty-six years since then? Why should we teach about this in our own courses?
On Saturday, December 5, you have a rare opportunity to explore answers to these questions with Mike Chinoy, who covered the demonstrations and their aftermath for CNN, and Louisa Lim, former NPR China correspondent who is the author of new book, The People’s Republic of Amnesia. The workshop will also feature Tiananmen Square, the powerful documentary (available for free classroom use) on how reporters for American news organizations reported on this massive upheaval at the center of the world’s largest country.
What were the lessons of 1989 for the people of China? For the Communist Party? And for the world beyond China?
Space for this workshop for educators is limited and reservations are required. Act now to secure your seat and tell friends who would benefit from participating in this workshop.
Speakers

Mike Chinoy was CNN's Senior Asia Correspondent and served as a foreign correspondent for more than thirty years. After joining CNN at its London bureau in 1983, Chinoy served as Beijing Bureau Chief from 1987 to 1995. During that time he covered the 1989 events at Tiananmen Square, earning the CableACE, duPont and Peabody awards. He was also Hong Kong Bureau Chief for five years. His other awards include the Silver Medal from the New York Film Festival and Asian Television Awards for his reporting in Indonesia and Taiwan. Chinoy's published two books, China Live: People Power and the Television Revolution (1999) and Meltdown: The Inside Story of the North Korean Nuclear Crisis (2008). He taught at the USC Annenberg School of Communication and ran the School's Hong Kong summer program 2007-2009. From 2006-2009 he was Edgerton Senior Fellow at the Pacific Council for International Policy.