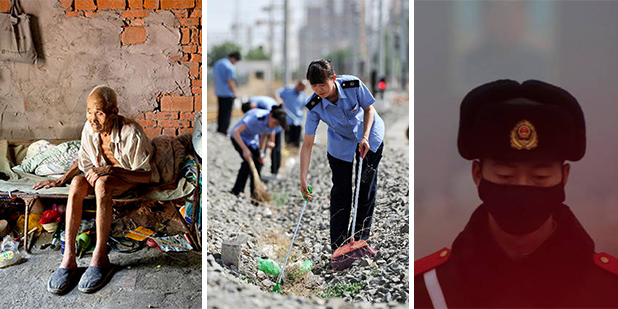 The USC U.S. - China Institute and the National Consortium for Teaching about Asia (NCTA) are offering a complimentary one-day workshop, China is Coping: Poverty Alleviation, Environmental Clean-up and Global Environmental Concerns, for all K-12 educators. The session will meet at USC on Saturday, April 7, from 9am to 1:30pm. Complimentary on-campus parking, breakfast, lunch, and refreshments will be provided.

The workshop features three distinguished individuals who have helped design, document, or initiate programs to address some of China’s challenges. Bill Bilakes has worked in China and Mongolia for the United Nations to support their efforts to foster sustainable development. Lucy Hornby has reported from China for two decades, covering the many industries, the environmental crisis, and the recent tensions over migrant communities. Zhuo Qiang (now known as Simba) is an activist and filmmaker who has worked in Africa to help preserve habitat and who has worked to increase Chinese awareness of the global implications of various practices.

Bill Bikales is Senior Development Economist for China and Mongolia at UNDP, based in Beijing, where he works on the UN's support for both countries' efforts to achieve the Sustainable Development Goals.  His current focus in China is the new poverty challenges that China faces following four decades of rapid growth and poverty reduction.  He is a Harvard-trained  economist and China specialist, who has had long-term residences in Mongolia, China, Philippines and Ukraine, where he worked as economic and social policy advisor on behalf of a number of international development organizations.

Lucy Hornby is deputy bureau chief for the Financial Times in Beijing. She previously covered China for Reuters from Shanghai and Beijing, and has reported from all of China’s provinces and regions (except Macau). Hornby grew up in New Jersey and graduated from Princeton University. She first moved to China in 1995, when she taught for Princeton in Asia in Wuhan, surviving the chills of the Yangtze Valley winter. She speaks Mandarin, French and Spanish.

Simba (星巴, originally Zhuo Qiang 卓强) is the first Chinese national engaged in full-time wildlife conservation in Africa. In 2011, Simba established Mara Conservation Fund, the first Chinese-initiated non-governmental organization in Kenya to protect wildlife from poaching. Simba’s work, along with that of basketball star and conversation advocate Yao Ming, was featured in the 2013 film The End of the Wild. Simba subsequently joined the Masai tribe and created new model for community wildlife protection. In 2017, the History Channel produced a documentary, Lion Heart, about Simba and his life in Kenya.