Robeson Taj Frazier spoke at the conference Through Tinted Lenses? How Chinese and Americans See Each Other, hosted by the USC U.S.-China Institute, on the topic of Chinese and a Black president, Blacks and China 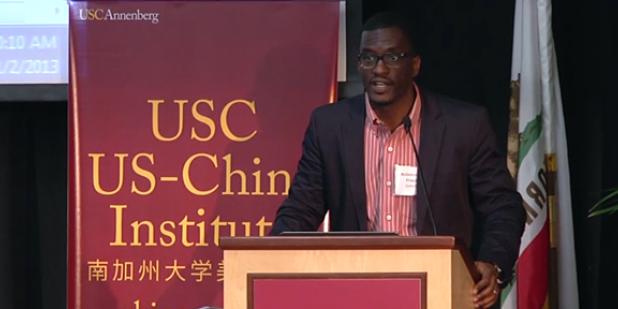 Taj Frazier teaches communication at USC. His research and teaching examine race, cross cultural exchange and traffic, social movements, and popular culture. Frazier traces how articulations and representations of race and gender travel globally through performance, media, art, athletics, diplomacy, and activism. He is currently scrutinizing African American activist intellectuals' cross-cultural exchanges with China from 1949-1976. Prior to coming to USC, Frazier taught at New York University, Princeton University, Berkeley, and the City University of New York. His work has appeared in numerous publications.