USC School of Pharmacy dean speaks at the fourth National Conference on Pharmacy Education in Taiwan. 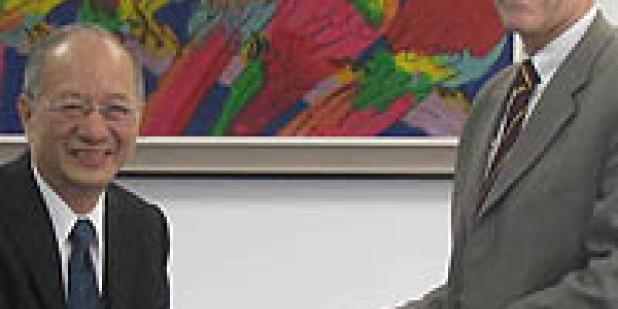 Story by Kukla Vera
This article was originally published on July 11, 2007 by USC News

R. Pete Vanderveen, dean of the USC School of Pharmacy, presented an overview of accreditation requirements at U.S. pharmacy schools during the fourth National Conference on Pharmacy Education in Taipei.

Vanderveen, holder of the John Stauffer Decanal Chair in Pharmaceutical Sciences, in late June explained the objectives of pharmacy accreditation in the United States and how accreditation affects deans at pharmacy schools across the country.

He explained how the Accreditation Council for Pharmacy Education functions in its role as the accrediting body for all U.S. pharmacy schools and the importance of meeting the council’s requirements.

The audience at the University of Taiwan included deans from Taiwan, China, Japan, Korea, Thailand, the Philippines and Australia who are looking for ways to enhance their curriculums with an eye toward the Pharm.D. model in the United States.

Of particular interest to many educators throughout Asia are the clinical pharmacy programs that American students follow as part of their training to become pharmacists.

Vanderveen gave the audience an overview of how pharmacists are educated generally in the U.S. and specifically at the USC School of Pharmacy, the nation’s top-ranked private pharmacy school.

“This was a unique opportunity to share what we’ve learned in the U.S. about accreditation and the value of clinical training in pharmacy education,” he said. “They were very interested in USC’s School of Pharmacy because of our 50 years of experience with offering the PharmD.”

While in Taiwan, Vanderveen also spoke to the faculty and administration of the Chia Nan University of Pharmacy and Science. Alumni of Chia Nan, the largest private pharmacy school in Taiwan, account for more than 40 percent of all practicing pharmacists in the country.

Vanderveen signed an affiliation agreement with Chao-Hsiun Wang, the president of Chia Nan University. The pact specifies that the USC School of Pharmacy will work with Chia Nan as the institutions move toward a more clinical curriculum while taking part in exchange programs among faculty and students. Wang is the father of USC School of Pharmacy assistant professor Clay Wang.

Vanderveen also met with representatives from National Taiwan University, where he discussed pharmacy education with the president of that institution and met with the School of Pharmacy dean at Peking University.