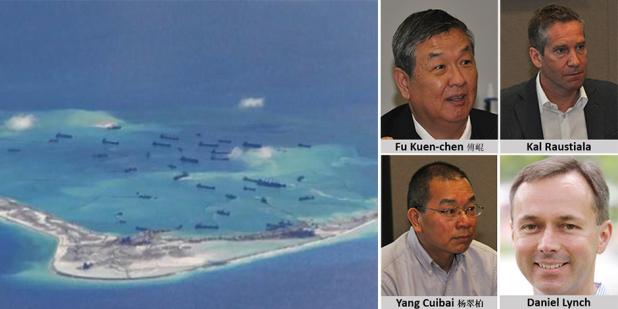 For an area with the tiniest of populations, the South China Sea certainly gets a lot of attention from world leaders, military strategists, shippers, energy and fisheries planners, and the general public. A number of countries lay claim to islands and rocks in the 1.4 million square mile region. Much of the oil that powers the economies of China, Japan, and South Korea passes through the area. So does a huge share of global trade. China’s built air strips, the Philippines has gone to court, Vietnam and China have sparred over oil exploration, the United States has sailed ships and flown planes near the disputed islands and rocks, and last month, Taiwan’s President Ma Ying-jeou visited an island controlled by Taiwan’s military, but claimed by three other governments. The region deserves the attention its getting.

Fu Kuen-chen 傅崐成Prof. Fu is dean of Xiamen University's South China Sea Institute, an institute which builds on the university's decades-long efforts to study the region and, particularly, maritime law. He is among the scholars recruited through China's "Thousand Talents" program (千人计划) and also heads the Center for Oceans Law and Policy at Shanghai Jiaotong University. Fu was educated at National Taiwan University and the University of Virginia and is a leading scholar of maritime law. He previously taught at National Taiwan University and other universities in Taiwan and Hong Kong and he has served as a member of Taiwan's legislature. He's written and edited dozens of books in English and Chinese. The first of these, published in 1981, focused on SCS resources and the most recent of which have looked at topics including cross-strait commercial law, the Cairo Declaration and Sino-Japanese ties, and U.S. Coast Guard maritime enforcement practices. Fu is also editor of China Oceans Law Review and the South China Sea Bulletin.

Kal RaustialaProf. Raustiala is director of the UCLA Ronald Burkle Center for International Relations which has been a leading center for research and teaching about international affairs since 1979. Raustiala holds a joint appointment in the UCLA School of Law and the UCLA International Institute. He was educated at Duke University, Harvard University, and the University of California, San Diego and has taught Harvard, Columbia, Princeton, and Chicago. Among the courses he teaches are ones on theories of international law and public international law. He’s the author of Does the Constitution Follow the Flag: The Evolution of Territoriality in American Law and The Knockoff Economy: How Imitation Sparks Innovation. He’s published numerous articles in academic journals as well as in the New York Times, the Wall Street Journal, the Financial Times, the New Yorker and other publications.

Yang Cuibai 杨翠柏Prof. Yang is a professor of law at Sichuan University where he also directs the university’s International Policy and Legal Research Center.  Yang’s research focuses on international law, comparative law, and environmental law. His monographs include several on Nansha Islands (Spratly Islands) sovereignty and resource issues as well as work on energy and environmental law and South Asian constitutional law. In 2007, Yang received a Pakistan Presidential Award for his contributions to enhancing relations between Pakistan and China. He oversaw the development of the legal platform for the “2011” Collaborative Innovation Research Center for South China Sea Studies.

Daniel Lynch 林丹Prof. Lynch has taught international relations at the University of Southern California since 1997. His new book is China’s Futures: PRC Elites Debate Economics, Politics, and Foreign Policy. His two previous books are Rising China and Asian Democratization: Socialization to "Global Culture" in the Political Transformations of Thailand, China, and Taiwan and After the Propaganda State: Media, Politics, and "Thought Work" in Reformed China. The author of numerous articles in academic journals, Lynch also writes for general audiences, for example his January essay in Foreign Affairs on China’s demographic, economic, and environmental challenges. He teaches courses on security, regional politics, and other subjects. He directed the Political Science/International Relations graduate program for three years. He was educated at the University of Kentucky, George Washington University and the University of Michigan.