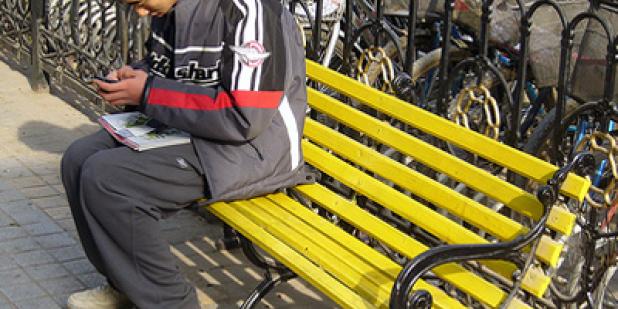 The rapid and widespread adoption of cell phones by Chinese is, of course, critical to the popularity of cellular text messaging. In 2006, 67.68 million new cell phones users were registered in China. By the end of the year, 461 million Chinese, some 35% of the population, were using cell phones.

According to China Daily, Chinese cell phone users pounded out 15 billion text messages to greet others during the one-week Chinese New Year Festival holidays in February 2007.

In addition, some Chinese have turned text messaging into paying jobs, sometimes well-paying jobs. A People's Daily article tells of some who produce text messages to be downloaded from websites. These professional message writers earned more than US$1,280 in one week during the New Year holiday.

It's not surprising that any medium as popular as this one has caught the government's attention. People’s Daily states that a court in the city of Nanjing court has started providing court information to those requesting it via text messaging.

In addition, in 2005, when many anti-Japanese protests were held around China, the Shanghai municipal government sought to end the protests by sending out messages saying, “We ask people to express their patriotic passion through the right channels, following the law and maintaining order.”

Text messaging is becoming increasingly popular in the United States, but still lags behind China and most other nations. According to a January 2007 survey conducted by M:Metrics, only 39% of U.S. cell phone users send text messages in any given month.

M:Metrics, "Mobile music usage is climbing, but not all musicphones are created equal, March 21, 2007: <http://www.mmetrics.com/press/PressRelease.aspx?article=20070321-musicphones>.

Pou In Kuan is a USCI intern. She is Journalism student from Washington State University. She plans to write for magazines and online outlets.