Ernest Wilson outlines the existing discussion about Chinese-African ties and advances a research agenda to enable policy-makers to act effectively.
May 8, 2007
Print 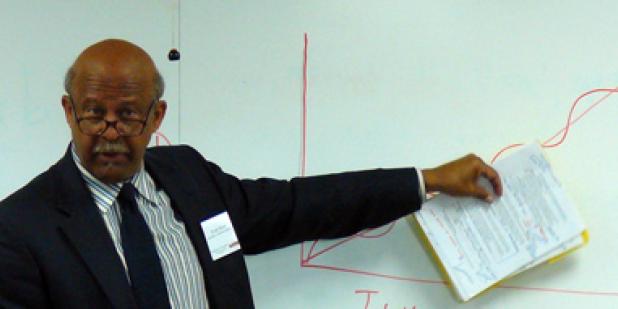 was the lead-off speaker at an April 27 conference entitled “Rethinking Africa's China Factor: Identifying Players, Strategies, and Practices.” The conference was held at UCLA and was sponsored by – and the Center for Chinese Studies at UCLA and by the UC Institute on Global Conflict and Cooperation.

Arguing that the potential downside to strong ties between and African nations is not nearly as dire as the potential upside may be bright, suggested that the should seek to support improved ties that serve the interests of Africans and Chinese. He complained that thus far, few of the scholars, public intellectuals, and officials commenting on the relationship have been either Chinese or African. More voices from both places are needed.

devoted the bulk of his talk arguing for solid and multidisciplinary research into Chinese-African ties. He noted that core questions on the size and scope of Chinese activities need answering to establish a baseline by which we can measure subsequent actions. More work is required to determine the degree to which Chinese policies and practices differ from international norms. And scholars have only begun to identify the range of actors in Chinese – African relations. In addition to governmental officials, there are leaders of state owned enterprises, private enterprises, labor contractors, and many other participants engaged in exchanges between and .

Prior to coming to USC, held a joint appointment as Professor in the Department of Government and Politics, Center for International Development and Conflict Management; and in the Department of African-American Studies at the of , . He continues to serve on advisory committees for a number of organizations, including the Council on Foreign Relations, the Overseas Development Council, and a number of editorial boards such as the Journal of Democracy.

From 1979-1981, Dr. Wilson was a member of the faculty. He left to teach at the of , serving as the Director of the Center for Research on Economic Development and as Associate Professor of Political Science and associate Research Scientist at the Institute for Public Policy Studies before joining the in 1992. He was a Visiting Senior Fellow for Africa at the Council on Foreign Relations in (1992-1993). From 1993-1995, Dr. Wilson served in several senior policy positions in the public and private sector as Director of International Programs and Resources on the National Security Council, The White House (1993-1994); Director of the Policy and Planning Unit, Office of the Director, U.S. Information Agency (1994); and as Deputy Director of the Global Information Infrastructure Commission (1994-1995). From 1995 to 2002, he was the Director of the Center for International Development and Conflict Management (CIDCM). He is Senior Advisor to the Global Infrastructure Information Commission. In 2004, Dr. Wilson was re-appointed by President George W. Bush and confirmed by the Senate to sit on the board for the Corporation for Public Broadcasting.