The Implications of "Tianxia" as a New World System 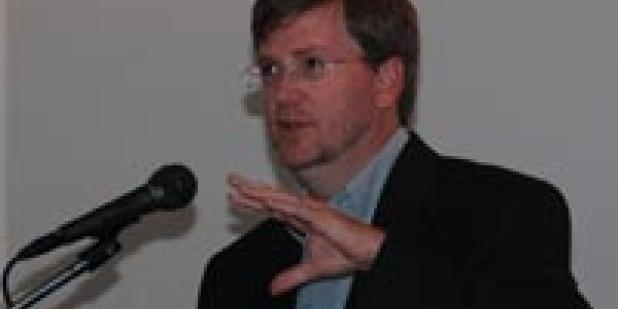 As China’s economy roars ahead and its influence is increasingly felt not just in East Asia, but across the world. This necessitates a look at not just China’s foreign policy but its description of that policy. How does China describe its place in the world? How does it describe its relations with others? William Callahan analyzed these narratives in a September 2008 presentation at USC: "Security, Identity and the Rise of China: Beijing's Foreign Policy Discourse in the 21st Century." In this lecture, the University of Manchester scholar examined how the recent revival of the ancient Chinese concept of tianxia has impacted China's foreign policy narratives in the 21st century. Callahan’s presentation drew on ideas contained in his forthcoming book: Chinese Visions of World Order: Post-Hegemonic or a New Hegemony. He  scrutinized China's alternative visions of how the world is and could be ordered and assessed how these ideas were put into play in Beijing's foreign policies.

Callahan began his lecture by contending that although China is increasingly seen as a responsible member of international society, we must also recognize that China’s government does not necessarily accept the structure of that society as desirable. Scholars and diplomats are now paying attention to China’s interest in and potential to promote an alternative to the Eurocentric model of international relations.

system, but he argued that it is important to follow and understand how an idealized vision of China’s imperial past is being discussed by Chinese scholars and policy makers. This vision of China and its place in the world, tianxia 天下, is increasingly prominent in public discussions in China of the future. Callahan argues that tianxia runs counter to the Chinese government’s assertion that it is devoted to peaceful development within a stable international system.  Tianxia or “all under heaven” was elevated within popular discourse by a bestselling book by prominent philosopher at the Chinese Academy of Social Sciences. Callahan focuses on this work and the discussion it has launched.

Zhao Tingyang 赵汀阳 published The Tianxia System: A Philosophy for the World Institution (天下体系：世界制度哲学导论) in 2005. Callahan attributed much of the best-seller’s popularity to its ability to capture people’s interest in Chinese-style solutions to world problems and the unique manner in which the concept of tianxia combines the seemingly contradictory discourses of nationalism and cosmopolitanism together. Callahan examined China’s alternative worldview in three parts. First, he summarized and considered Zhao’s discussion of how the all-inclusive tianxia system would solve the world’s problems through a world institution that embraces difference. Callahan then examined some of the historical and philosophical problems presented by tianxia, with special emphasis on how its approach to an ethical world order
encourages a “conversion” of difference, not a “conquest” of it. Finally Callahan assessed the foreign and domestic impact that tianxia would have.

Callahan said that according to Zhao, the problem in international politics today is not one of failed states, but a failed world in which disordered chaos reigns. Under Zhao’s theory, chaos arises not from economic or political problems, but from the concepts ordering the world. Zhao argues the Chinese concept of tianxia can provide an analytical and institutional framework needed to end the chaos. Zhao’s concept of tianxia has three meanings- one geographical, another psychological, and the last institutional- which are are all essential and mutually dependent on one another. Geographically, Zhao argues that tianxia is more than a physical place, but a way to think of the world which does not automatically begin from a national perspective. Psychologically, Zhao links the concept of tianxia as pertaining to “all the people” in which there is no such thing as an “outsider” because China’s process of thought does not reject the “other.” According to Callahan, Zhao says Chinese cultural unity is the opposite of the Western approaches which divide the world’s peoples by race. Ultimately, Zhao contends that tianxia is about transformation: transforming enemies into friends and many into one. Callahan said Zhao believes that for the tianxia system to be successful, it must be implemented on a globally.

Callahan argued that while Zhao’s theoretical propositions are original and have stimulated much discussion, those propositions rest on shaky ground. They are primarily based on select statements drawn from China’s rich literary heritage. Many of these, Callahan said, were taken out of context and misrepresented. Callahan’s greatest complaint about Zhao’s interpretation of tianxia was that he describes it as an all-inclusive system when it is actually quite the opposite. Callahan noted that tianxia uses absolute exclusion and hierarchical inclusion to marginalize the West, the people, and other nations along China’s frontier. While Zhao criticizes Western use of absolute binaries, Callahan argued Zhao uses the very same method of thinking to exclude the West as the “other” and as the source the immoral individualist thought system that creates chaos and needs to be transcended. Callahan further asserted that Zhao marginalized the people in his work by contending that the masses are incapable of thinking through the world and therefore cannot be trusted to act in a truly world interest. While conceding that Zhao did not blatantly exclude the people, Callahan claimed that by criticizing the common people and calling them names such as “selfish, irresponsible, and foolish,” Zhao placed them in an inferior status.

The greatest weakness of Zhao’s interpretation of tianxia, according to Callahan, is that it is to be globally applied, bringing everyone in. This inclusiveness misses a fundamental point: not everybody wants to be included. Callahan contends Zhao is guilty of doing just as Zhao accuses Westerners of doing: universalizing their own world view. It is how tianxia deals with difference that matters, Callahan said it steamrolls it rather than tolerating difference. Rather than guiding us towards a post-hegemonic world order, Callahan insists that tianxia presents a new hierarchical vision for the 21st century.

Just as Zhao’s work has stimulated great discussion among Chinese intellectuals and among international relations scholars, Callahan’s discussion of it provoked a lively question and answer session at USC. Many of the questions were sparked by Callahan’s repeated point that ideas about tianxia are often embedded in the sorts of cultural activities and presentations China’s government sponsors abroad. Other questions focused on concrete international situations such as China’s involvement in Africa and how that involvement was understood within China. Was it being seen as fitting with tianxia or was it seen as a grab for the resources needed to support a rising power? Other audience members noted that while in ancient times tianxia was theoretically all-inclusive, as a practical matter only immediate neighbors were affected by Chinese regimes’ embrace of the concept. How have scholars and officials of neighboring states responded to the rise of tianxia discourse within China? And, most importantly, what evidence is there that the tianxia discourse is actually influencing policy makers? Are top officials in China’s government reading Zhao’s book and the publications that have followed from a number of writers? Are tianxia ideas guiding Chinese action?

Callahan conceded that tianxia is far from the only concept being examined by Chinese intellectuals and that there’s not been a public and explicit embrace of the idea by China’s leadership. He argued, though, that the effort to establish Confucius Institutes all over the world will promote teaching about Chinese culture and could convey notions about China’s ideas of how the world should be ordered.

William A. Callahan joined the University of Manchester in September 2005 as Chair in International Politics and Research Director of the new interdisciplinary Centre for Chinese Studies. Callahan has taught at the University of Durham, University of Oregon, Renmin University of China, Seoul National University, Rangsit University (Thailand), and has been a Visiting Fellow at Harvard University, the Bellagio Center (Italy), the University of Hong Kong, the Academia Sinica (Taiwan) and CASS (China). In 2007-08 he is a Resident Fellow at the Woodrow Wilson International Center for Scholars (Washington, DC). Callahan’s research examines the international politics of East Asia, including Chinese foreign policy and the transnational relations that join East Asia, Southeast Asia and Euro-America. He is interested in exploring the interface between theory and practice in international politics: how East Asian politics needs to be better theorized, on the one hand, and how the Chinese experience calls into question the foundations of  international relations theory, on the other. Callahan’s most recent books are Contingent States: Greater China and Transnational Relations’(Minnesota, 2004), and Cultural Governance and Resistance in Pacific Asia (Routledge, 2006). He has published articles in many journals, including International Organization, Theory & Event, Asian Survey, Alternatives, and the Journal of Strategic Studies.