Huang Kwei-bo: Being flexible in dealing with China and the United States

The chief of the research and planning division of Taiwan's foreign ministry discusses the island's relations with its giant neighbor and its most important supporter.
March 14, 2010
Print 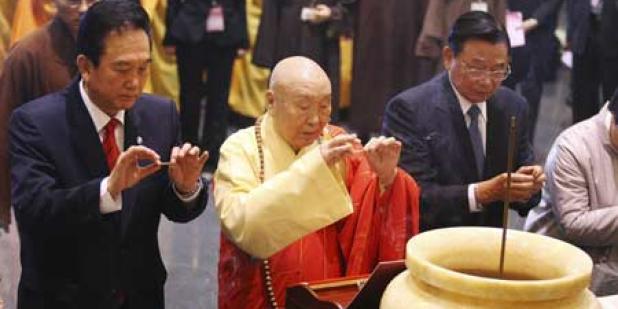 Chen Yunlin and Chiang Pin-kung, seen above, have held four rounds of meetings since Taiwan President Ma Ying-jeou 马英九 came to power in May 2008. Chen represents Beijing and heads the Association for Relations Across the Taiwan Straits. Chiang represents Taipei and heads the Straits Exchange Foundation. These meetings have thus far produced a dozen agreements, among them permitting direct flights, shipping, and increased tourism, anti-crime cooperation, and other exchanges. The flow of people, trade, and investment across the strait is steadily increasing. At the same time, in 2008 and 2009, the Bush and Obama administrations sold weapon systems to Taiwan, signaling warmer ties between the US and Taiwan while at the same time upsetting Beijing leaders. On February 24, 2010, a Taiwan Ministry of Foreign Affairs delegation visited USC to discuss these developments and continuing tensions.

The delegation consisted of:

Huang Kwei-bo 黃 奎 博, head of  the Research and Planning Committee of Taiwan’s Ministry of Foreign Affairs. He is on leave from National Chengchi University 國立政治大學 where he teaches foreign policy and diplomacy. He also serves as Vice President for the Taiwan Foundation for Democracy and as a board member of the Cross-Strait Interflow Prospect Foundation. He earned a masters degree at George Washington University and a doctorate at the University of Maryland.

Hong Cheng-pin, assistant director general of the North American Affairs Department at Taiwan’s Ministry of Foreign Affairs. He has held a number of overseas posts, including in Atlanta, the Philippines, and South Africa. Director Hong earned bachelor and masters degrees at National Chengchi University.

Kuo Sowang (Tony). a researcher with Taiwan’s National Youth Commission, an office under the President. He is also currently a fellow at the Henry Stimson Center in Washington, DC. He’s previously taught at several universities in Taiwan. Dr. Kuo earned his doctorate at Tamkang University.

Teng Chung-chian, dean of National Chengchi University’s College of International Affairs. Dr. Teng received his doctorate at Northwestern University and is a specialist on international negotiations. Among his many distinctions was service as Secretary-General of the Chinese Political Science Association in Taiwan. He and Dr. Huang recently co-edited a multivolume series on Conflict Management, Security, and Intervention in East Asia.

Dr. Huang opened the symposium with a presentation on the current state of relations with China and the United States.

Click on the play button above to see Hwang Kewi-bo's presentation.