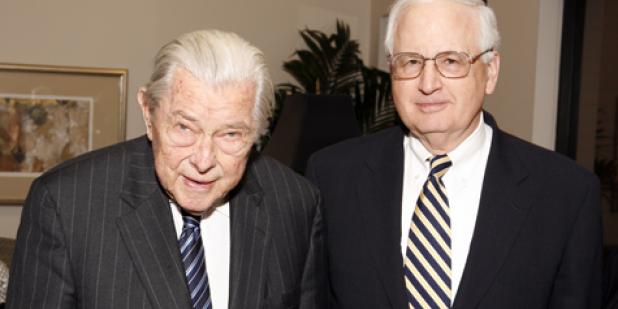 The Herbert G. Klein Lecture in Civic and Community Leadership at USC was established in May 2006 through the USC College of Letters, Arts & Sciences. The lecture is annually in both San Diego and on the USC campus. In May 2006, Mr. Klein launched the series before a San Diego audience of more than 150 alumni and friends, including a group of leaders from area high schools. In May 2007, W. Tom Johnson, former publisher of the Los Angeles Times and former CEO of CNN Television will be the keynote speaker at The Lodge at Torrey Pines. The April 20, 2007 keynote address by Ambassador Roy Stapleton was the inaugural Klein campus lecture.

Click here to visit the conference page featuring a video of the lecture.

J. Stapleton Roy retired from the U.S. Foreign Service after a 45 year career, holding the Service’s highest rank, Career Ambassador. Mr. Roy was born and grew up in China, later graduating from Princeton University. He served in Moscow during the Cold War and also in Bangkok, Hong Kong, and Taipei. When the U.S. and China restored relations in 1979, Mr. Roy was appointed deputy chief of mission. He later returned to Beijing as ambassador, serving from 1991 to 1995. He was also ambassador to Singapore (1984-86) and Indonesia (1996-99). At the time of his retirement in 2001, Mr. Roy  was Assistant Secretary for Intelligence and Research. Since then, he has been managing director of Kissinger Associates, a strategic consulting firm.

Herbert G. Klein is a USC graduate and a Life Trustee. Beginning as a reporter in Alhambra, he rose to head two major media organizations, Metromedia and Copley Newspapers. A longtime advisor to Richard Nixon, he served as President Nixon's communications director from 1969 to 1973 and accompanied him on his historic 1972 visit to China. From 1980 to 2003, he was editor in chief of Copley Newspapers, a chain of nine daily and eight weekly newspapers, whose flagship paper is the San Diego Union - Tribune. Since retiring from the Copley Press, Mr. Klein has continued to research and write on a great variety topics, including how China is changing. In his 1980 book Making It Perfectly Clear, Mr. Klein drew on his experience working in five presidential campaigns to discuss the love - hate relationship between politicians and the press.

The 2008 Herbert G. Klein Lecture was delivered by Ambassador Clark T. Randt, Jr. Click here to read a summary of that talk and click here to view a video of the lecture.