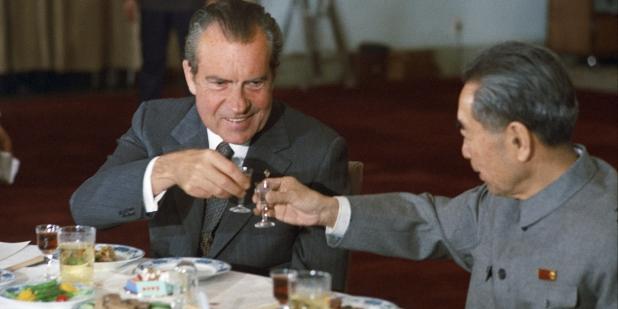 In Shanghai Feb. 27, 1972, in his toast to Premier Zhou Enlai 周恩来 and Zhang Chunqiao 张春桥, chair of the Shanghai Revolutionary Committee and a member of the Communist Party politburo, President Richard Nixon said, “We have been here a week. This was the week that changed the world.” That evaluation quickly became a headline, the title of books and documentaries (ours included). Was it accurate?

Yes. Nixon and Mao Zedong, two accomplished cold warriors, stepped away from putting ideology first in favor of engagement that might help each in its maneuvering towards the Soviet Union. For the Chinese side the issue of Taiwan was paramount, for the White House it wasn’t. In Shanghai, the U.S. “acknowledged” Beijing’s view that Taiwan was part of China, but called for a peaceful settlement of “the Taiwan question.” The U.S. pledged that as regional tensions diminished, it would withdrawal the thousands of troops and support personnel it stationed in Taiwan. The desire for peace through continuing dialogue is woven through the communiqué hammered out by Henry Kissinger and Zhou and endorsed by Nixon and Mao. It remains at the political center of the U.S.-China relationship and the changes the visit set in motion helped shape our world today.

Four years after that important day in Shanghai, Nixon had been re-elected, but then forced from office by the Watergate scandal. Zhou had succumbed to cancer. Zhang was under arrest, eventually to tried along with Mao’s widow Jiang Qing 江青 and the other members of the “Gang of Four.” The two sides had liaison offices in each other’s capitals, but only in 1979, under Jimmy Carter and Deng Xiaoping were the countries able to establish diplomatic relations. The U.S. broke formal diplomatic ties with Taipei, but Congress enacted the Taiwan Relations Act to mandate continuing unofficial ties, including arms sales. Beijing was unhappy and said so, but was focused on economic development and was eager for technology from the U.S.

Out of the public eye, the two sides cooperated on monitoring the Soviet Union and they collaborated in supporting the resistance to the Soviet occupation of Afghanistan. This continued during Ronald Reagan’s presidency which also sold weapons and military technology to Beijing. In 1984, after a trip to China, Reagan told an Alaska audience how he saw a lively “free-market spirit” in “this so-called Communist China.”

Neither side stressed trade and economic development, though American business was eager to sell to China and jealous of those already doing so (e.g., Boeing signed a deal right away and delivered 707s in 1973, grain and cotton sales were significant, Jack Valenti of the Motion Picture Association told Henry Kissinger he was ready and able to take stars to China).

The relationship grew under Republican and Democratic administrations. It did so because leaders considered it necessary to serve various American interests. It wasn’t smooth and events often complicated U.S.-China ties. Friction over human rights, market access, subsidies for competitors, intellectual property theft and military frictions were constant. The Berlin Wall fell and the Soviet Union dissolved. Some in China fretted that openness made the party-state vulnerable. The Communist Party intensively studied the fall of other regimes and took actions it hoped would stave off “peaceful evolution” or “color revolutions.”

The two countries have continued to find the net benefits of dealing with the other far outweigh the net costs. They often conclude that not dealing with the other isn’t a viable option. China’s total foreign trade in 1971 was $4.2 billion. U.S.-China trade was under $100 million. From Apple to Yum Brands, many American companies count on Chinese consumers for their profits. In 2021, trade in goods between the world’s largest economies totaled almost $660 billion. In 2020, two-way trade in services reached $56 billion. Supply chain woes have reminded people of how intertwined we are. In a normal year, millions of Americans and Chinese visit each other’s country. Over 350,000 Chinese are studying in American schools.

Of course, in 1972, leaders in Beijing, Washington or Taipei did not anticipate the transformation of Taiwan from a one-party state to a flourishing multiparty democracy, a process that took decades. Few in Taiwan want unification with Beijing and few are willing to embrace the risk of attack that declaring independence might bring. Many are frustrated by the American policy of strategic ambiguity on what it would do if one side of the Taiwan strait upsets the status quo. But that policy, resting on the assertion America has a national interest in peace and stability and the region, has helped to bring just that.

*****
Just three months after Nixon’s trip, China’s delegate to the UN Environment Conference denounced the U.S. for the harm it inflicted on the environment. He called on the developed world to compensate the developing world for the harm it had done. He pledged to cooperate to reduce pollution. He said China favored family planning but that science and technology was always advancing faster than population growth.

Fifty years later, China is both the biggest emitter of greenhouse gasses and the biggest producer of green energy. And it is trying to promote births to cope with the challenges posed by an aging population and shrinking work force. While we’ve learned to live with a lot of nuclear weapons and more nuclear states, climate change now poses an existential challenge. As the biggest economies and biggest polluters, the U.S. and China have an outsized obligation to act to mitigate global warming. There are forces in both countries that oppose making any sacrifice, especially ahead of the other country. But the risks of inaction are immense and pain is already being felt. Will today’s leaders be pragmatic enough to act, even if coordinated and collaborative U.S.-China measures might not be possible at present? We should hope so.

Next week, we'll look at how American attitudes toward China have shifted.