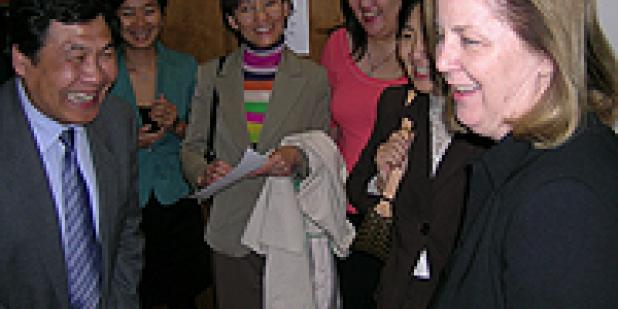 The USC School of Social Work hosted a conference with China Vice Chairman Qingchun Yan and Kaiti Zhang, director of the China Research Center on Aging on March 19 at the Hamovitch Research Center.

“At USC we have faculty from different departments doing research on China, and this is a great opportunity for them to get access to national data straight from the source,” she said.

The two Chinese government delegates presented results from the Sample Survey on Aged Population in Urban/Rural China conducted in 2000 and 2006.

The first national survey of the older population sponsored by the Chinese government in 2000 had a nationally representative random sample of approximately 20,000 respondents from 20 provinces. The 2006 survey had a similar sample size, including a sub-sample of 9,830 respondents from the original report.

Results showed a glaring disparity in the quality of life between elders in urban and rural areas.

For example, in the major cities, elders reporting conditions such as a sense of loneliness have declined in the past six years, whereas in rural areas – where 70 percent of the nation’s elders currently reside – the numbers of elders feeling lonely have increased dramatically.

Before the drastic economic changes in the Chinese economy of the last quarter century, Yan said, 80 to 90 percent of people in rural areas had medical insurance, but in the year 2000, that number was down to 10 percent.

“Because of different economic developments in the country, social services geared toward the older population are situated in relation to economic centers,” Yan said. “The top priority of the Chinese government is now to help people in the rural areas.”

For years, Yan said, the Chinese government had a two-tier approach that separated rural and urban when developing elder policy, but now the nation is streamlining its efforts.

Social welfare services, social security reform such as minimum-income guarantee programs and comprehensive medical care programs are on their way.

“We are now using the surplus of funds from the urban centers to implement programs in rural areas,” Zhang said.

There is also a great need for private sector and foreign investment in social services for the elderly in China, Zhang said. He encouraged students and faculty members from USC to get involved.