Daniel Lynch - The Chinese Debate on America's Decline in the 2000s

Daniel Lynch spoke at the conference Through Tinted Lenses? How Chinese and Americans See Each Other, hosted by the USC U.S.-China Institute, on the topic of politics, ideology, and assessing the other. 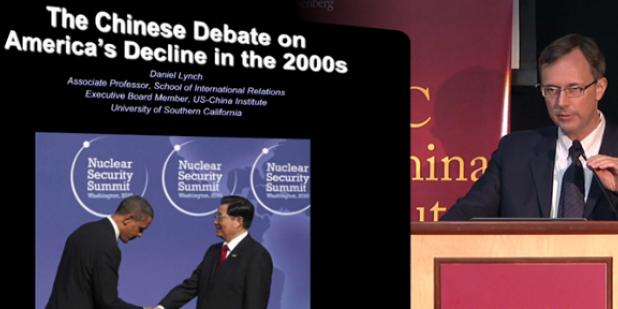 Daniel Lynch teaches international relations at USC and is a member of the US-China Institute's Executive Committee.He's the author of two books: Rising China and Asian Democratization: Socialization to "Global Culture" in the Political Transformations of Thailand, China, and Taiwan and After the Propaganda State: Media, Politics, and "Thought Work" in Reformed China. His forthcoming book examines how Chinese elites envision the future of China's economy, politics, communication system, and foreign policy—and what the implications are for Western social science models of China's developmental trajectory.