Only 25% of the Confucius Institutes that have opened in the U.S. are still operating.
November 18, 2021
Print 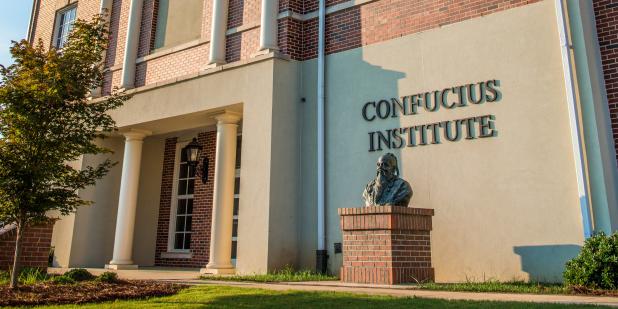 Image: The Confucius Institute at Troy University (Troy, Alabama) was established in 2007.

Most Confucius Institutes in the United States have closed their doors. Of the roughly 120 that opened at some point, only 30 remain open today and some of those have announced they’ll close in 2022. Though American attitudes towards China have soured over the past decade, interest in China remains high. What happened?

Seeking to promote study of Chinese culture and language and to forge positive bonds with educators and students, China’s government began sponsoring the establishment of Confucius Institutes in 2004. By 2018, there were 548 such institutes across the globe. The first Confucius Institute in the U.S. was at the University of Maryland. As a principal target of Chinese soft power efforts and because many American schools sought to create or expand Chinese language programs, the U.S. ended up with more such Confucius Institutes (and Confucius Classrooms in K-12 schools) than any other country. The university-based institutes were mostly partnerships between U.S. and Chinese schools with funding from on office of the PRC Ministry of Education. A 2019 Senate investigation found that the Chinese government provided US$158 million over 13 years to support the institutes and classrooms. U.S. partners supplied space and additional funding for staff and programs. For multibillion dollar universities and school districts, $100-250,000 of annual funding was not critical, but for poorly supported or non-existent Chinese language programs it was sometimes vital.

There were debates about these programs from the outset. Comedy Central’s The Daily Show famously joined the discussion in 2010 with a segment on Confucius Classrooms in one Southern California school district. In 2011, following the 2008 Beijing Olympics and the 2010 Shanghai World Expo, Republican Senators highlighted a “public diplomacy” gap between American and Chinese efforts to reach people in the other’s country. They noted:

"As a public, our knowledge of China is limited and concentrated among a few diplomats and academics. Not enough students are learning Chinese in our schools."

"China, for its own reasons, is helping to teach Americans about China. Beijing has invested millions in so-called ‘Confucius Institutes’ throughout the world that provide classes in Chinese language, literature and the arts… This is an opportunity for Americans who might not be able to afford overseas studies to delve into such subjects here."

The Senators called for the U.S. to create more American Centers in China and to bolster universities with partnerships in China to expand opportunities for American students in China and to reach more Chinese with American educational and cultural programs.

In recent years, however, criticism of the institutes continued along with complaints that U.S. institutions had trouble launching similar programs in China. Despite claims by some that Confucius Institutes were outposts for spying in the U.S., federal investigations found no evidence of illegal activity connected to the institutes or classrooms. Instead they found them productively engaged in language instruction and other programs. There was no evidence that housing a Confucius Institute blocked the schools from classes or programs looking at human rights, territorial and other issues the Chinese government might deem sensitive. Some institutions were faulted for failing to report foreign funding to the U.S. Department of Education.

Beginning in 2018, widespread American frustration with Chinese government policies helped longtime critics of the Confucius Institutes pass measures blocking American universities with Confucius Institutes from receiving U.S. government funding. Many schools felt they had no choice but to close their institutes, though in some cases non-profit organizations replaced them as hosts for institute programming. In January 2020, the University of Maryland announced it was closing its institute. Later that year, during a fiercely contested election, the U.S. Secretaries of State and Education wrote to universities and state education officials to argue for constraining Confucius Institutes and Confucius Classrooms. They wrote “The presence of an authoritarian slant in curriculum and teaching has never been more concerning, nor more consequential” and concluded, “While Americans may differ on many issues, threats to our freedoms unite us all.”

There’s no evidence that these programs actually threatened freedom of speech or hampered critical thinking among American students. One large 2019-2020 study of students at U.S. high schools with Chinese courses supported by the program showed that students who took those courses and those that didn’t both became less favorable in their views toward China. Fears of Chinese government indoctrination through these programs are overblown.

Fear of the consequences of not doing more to increase the number of Americans who can function in Chinese and who have learned about China, on the other hand, is entirely warranted.