A timely film featuring interviews with top advisers for McCain and Obama premieres at a USC conference. 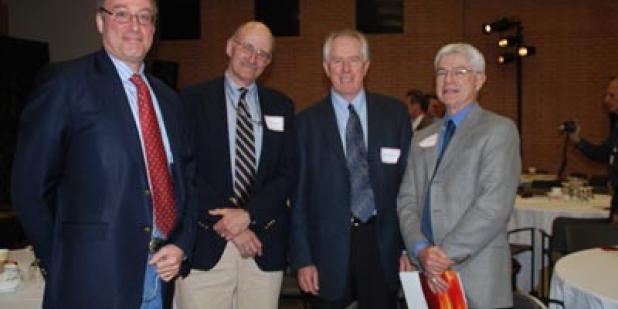 Whether a rising China will become a “responsible stakeholder” in worldwide affairs – and an ally or an adversary – is arguably the most important foreign policy challenge the next U.S. president will face.

However, examination of the key issues has been notably absent in media coverage and public discussion of each presidential candidate’s foreign policy plans, according to Clay Dube, associate director of the USC U.S.-China Institute.

“With a presidential election under way, we thought it would be a good opportunity, a great moment, to focus on U.S.-China relations and the making of policy toward China,” Dube said, noting that next year marks both the 30th anniversary of the establishment of U.S.-China relations and the 60th anniversary of the founding of the People’s Republic.

The U.S.-China Institute was the producer of Election ’08 and the Challenge of China, a new documentary reported by former CNN Beijing bureau chief Mike Chinoy of USC Annenberg and the Pacific Council on International Policy, featuring interviews with the top China advisers for John McCain and Barack Obama.

“The timeliness of this documentary is striking,” said USC Executive Vice Provost Barry Glassner. In his introductory remarks to “The Making of U.S.-China Policy,” a USC conference at which the documentary premiered, Glassner said, “The credit crisis, and the corresponding response by financial markets, as well as product recalls last summer and the current dairy product tragedy, are stark reminders to all of us of just how economically entwined our two nations are.”

Held at USC Davison Conference Center on Oct. 13, “The Making of U.S.-China Policy” was a daylong examination of major issues that may affect U.S.-China relations in the years to come, including intellectual property rights, currency values, product safety, Taiwan, China’s growing demand for natural resources and its role in such volatile hotspots as Darfur, North Korea and Iran.

Christensen said he believed that what the United States ought to do, and has been doing in the last few years, is to encourage China to make positive choices by emphasizing the basic message that “we want to work with you, we don’t wish you ill, we want you to be more active in the world, but we want to coordinate our activities so that we can get things done together,” Christensen said.

“In practice, these principles are an effort to get China to share more of the burden to make the international space more stable,” Christensen explained, “and to make long-term economic development a higher likelihood prospect for various areas of the world.”

Election ’08 and the Challenge of China is a production of the USC U.S.-China Institute with assistance from the Pacific Council on International Policy and the USC Annenberg School for Communication.