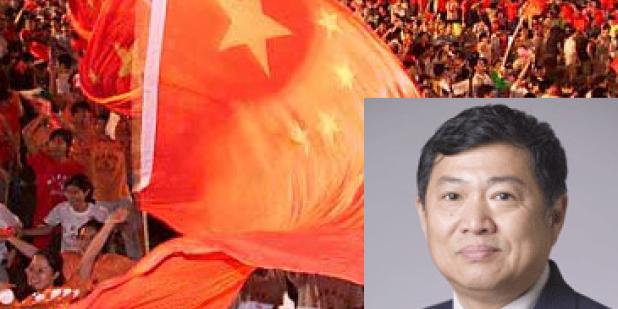 Coming of age in China during the intellectually impoverished period of the Cultural Revolution in the 1970s, Suisheng Zhao is now a leading scholar of Chinese studies, particularly the China-US relationship. Suisheng Zhao currently serves as Professor and Executive Director of the Center for China-US Cooperation at the University of Denver’s Graduate School of International Studies. He is founding editor of the Journal of Contemporary China, a member of the Board of Governors of the US Committee of the Council for Security Cooperation in the Asia Pacific, a member of National Committee on US-China Relations, and a Research Associate at the Fairbank Center for East Asian Research in Harvard University.

At the invitation of the USC U.S. – China Institute, Suisheng Zhao gave a talk on Feb. 1 to more than fifty enthusiastic scholars, students, and administrators on Chinese nationalism and its foreign policy implications.

Contrary to the traditional view that the ideology of communism is the foundation of the People’s Republic of China, Suisheng Zhao proposed that nationalism is the foundation of the country. In 1949 when Mao Zedong announced the establishment of the People’s Republic of China, he used a nationalist phrase -- “Chinese people have stood up ever since” -- to restore China’s identity, pride, and its rightful place in the world.

With the economic, political, and military development of China in the late twentieth century, Chinese nationalism has been on the rise as communist ideology has been on the decline. Zhao sees no cause for concern in this trend. National interest and national pride are healthy in any state. However, the concern arises when political leaders use nationalism to demoralize other nations in order to promote national interest or to mobilize the people to act aggressively. This becomes savagism rather than nationalism. There are some alarmists who believe that Chinese nationalism is indeed a threat and will lead China to become an international aggressor.

Is Chinese nationalism aggressive? Suisheng Zhao gave a resounding “no” in response to this question. He further explained that Chinese leaders have followed Deng Xiaoping’s instruction to keep a low profile in terms of international politics. China does not try to be a leader for fear of becoming a target of international aggression or interference. Therefore, Chinese nationalism is not a tool for assertiveness and aggression.

The origin of Chinese Nationalism

Nationalism did not exist until the Opium War in 1840-1842 between Chinese and British troops. China’s defeat opened China’s doors, which ultimately led to the disintegration of the Chinese empire and the loss of national sovereignty to Western imperialists. Chinese people had suffered humiliation from imperialism for hundreds of years ever since. From the beginning of the twentieth century through today, most Chinese political leaders have not only shared a deep bitterness over this humiliation, but also shared a dream of a strong China.

According to Zhao, ethnic nationalism was one of the earliest forms of nationalism in the twentieth century. It advocates the creation of a single ethnic nation. For example, the Han majority rose against the minority Manchu in the Qing Dynasty in 1911. The Han sought to create a state dominated by the Han majority. Since then, this type of nationalism has given way to other forms of nationalism. It remains dominant only among the frontiers ethnic minorities in Tibet and Inner Mongolia, groups that were never able to create their own ethnic states.

Liberal nationalism, also introduced in the early twentieth century, eventually surpassed ethnic nationalism in its popularity. It defines the nation as a group of citizens who have a duty both to support the rights of the state and to pursue individual freedom. The post-Mao reforms in the 1980s, accompanied by Deng Xiaoping’s call for intellectual liberation created spaces for liberal nationalism to spread out and have a greater impact in contemporary China. After the Cold War, liberal nationalists have explicitly advocated the adoption of liberal democratic ideals to promote China’s renewal.

In the 1990s, Chinese intellectuals shared a deep suspicion of the West and feared a Western conspiracy to contain China. There was a resurgence of “Mao Fever” where his writings and other “say no” books became widely read and distributed. The authors of The China That Can Say No – an instant best seller with 2 million copies in 1996 – claimed that after nearly two centuries of humiliation at the hands of western imperialism, “the twenty-first century will be the century for the Chinese to restore its glory.” Mao Zedong was posthumously restored to his former status as protector of Chinese nationalism, and once again heralded as a “great patriot and national hero” for his firm stance against foreign imperialism.

Zhao asserts that contemporary Chinese leaders have been able to rein in this new sense of popular nationalism. They have replaced ethnic and liberal nationalism with a new pragmatic nationalism in order to gain legitimacy and control of the Communist party. Deng XiaoPing and his successors, Jiang Zemin and Hu Jintao have suppressed ethnic nationalism in Tibet, Xinjiang, and Inner Mongolia and have taken affirmative action to assimilate minority groups across the country. The patriotic education campaign of the early 1990s focused on national unity against ethnic separatist movements. Chinese leaders have cautiously encouraged liberal nationalism so long as Chinese citizens to not question the Party’s authority. The patriotic campaign held that China was not ready for liberal democracy, and the one-party rule would maintain political stability, a prerequisite for rapid economic development.

This pragmatic nationalism has been dominant in China since the market-oriented economic reforms in the early 1980s. Pragmatism was exemplified best by Deng’s “cat theory”: “A cat, whether it is white or black, is a good one as long as it is able to catch mice.” In other words, the Communist Party would allow certain economic reforms and a loosening of communist ideology in order to preserve the stability of the state.

Professor Zhao believes China’s pragmatic nationalism is fundamentally interest-driven, reactive and flexible. China will adopt any foreign policy strategy that ensures peaceful development and peaceful coexistence. The failure of the Soviet Union caused pragmatists to shift from a policy of uni-polarity to multi-polarity. Chinese leaders recognize that China’s economic advancement depends heavily on integration with the Western Countries. China has entered the World Trade Organization to accelerate China’s business development, maintained territorial integrity by preventing Taiwan from independence announcement, and won the bid to host the 2008 Olympic Games in Beijing to advertise its stability and success to the international community. Chinese leaders talk tough in foreign relationship affairs, but in reality, they act in a careful and highly calculated manner to avoid confrontation. However, China is often uncompromising and even arrogant when states demand that it adhere to Western views and positions.

There are many suspicions, misunderstandings, and misassumptions in the area of U.S. – China relations. Relations between these two countries have never been easy. With China’s rise in the 21st century, many fear another extended period of tension between the U.S. and China. Some Americans talk about China’s threat to U.S. security and interests and believe U.S. policy should try to restrain China. Chinese leaders are also concerned the U.S. will do everything to prevent China from gaining equal status with the U.S. However, Professor Zhao believes the conflict is navigable, because the world now is much more pluralized than in the past. It is necessary to build institutions to facilitate the U.S. - China relationship by creating and encouraging dialogue and conversation. Leaders in both China and the U.S. have made efforts to foster a candid, cooperative and constructive relationship.

The mission of Chinese international students

Chinese international students can help, on the one hand, by taking what they’ve learned in the U.S. in terms of technology, social sciences, and research and bringing that knowledge back to China. This infusion of western ideas and education can help China make some changes and reforms, and help China fit more into the international community.

On the other hand, Suisheng Zhao further suggested that Chinese international students in U.S. have a mission to help American understand China. There is a huge interest in China among the American people. Chinese international students in the U.S. are a bridge between Americans and Chinese and must promote mutual understanding. Ultimately, Chinese students should make American friends.

“The peace of the world could be promoted if people become friendlier to each other.”  Suisheng Zhao commented with a smile.

**************
Prof. Zhao is the author or editor of nine books or monographs. His most recent books are Debating Political Reform in China: Rule of Law versus Democratization (M. E. Sharpe, 2006), A Nation-State by Construction: Dynamics of Modern Chinese Nationalism (Stanford University Press, 2004), Chinese Foreign Policy: Pragmatism and Strategic Behavior (M. E. Sharpe, 2003), China and Democracy: Reconsidering the Prospects for a Democratic China (Routledge, 2000), Across the Taiwan Strait: Mainland China, Taiwan, and the Crisis of 1995-96 (Routledge, 1999). In addition, his forthcoming book, The Rise of China and Transformation of US-China Relations, will be published by Routledge in 2007. His articles have appeared in Political Science Quarterly, The Wilson Quarterly, Washington Quarterly, International Politik, The China Quarterly, World Affairs, Asian Survey, Asian Affairs, Journal of Democracy, and elsewhere.

**************
Jing Li is an Ed.D. candidate at the USC Rossier School of Education and a Holmes Scholar. She is also a research assistant at the Rossier School’s Research Institute. A native of China, prior to studying at USC, she worked in investment banking in Beijing.