As China's interests in Africa grow, it seeks to strengthen its media presence.
September 23, 2021
Print 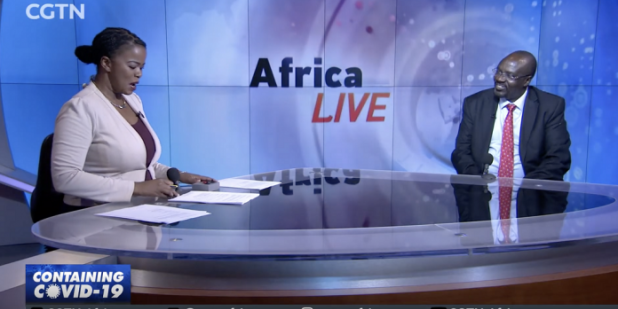 China has been investing and building in Africa for decades. Total trade between China and Africa was US$59 billion in 2007 and by 2019 had risen to US$200 billion. Chinese companies have built at least $40 billion worth of projects in Africa since 2012. These include seaports, stadiums, railways, highways and much more. China's only overseas military base is in Djibouti where 12% of global trade passes by the Horn of Africa. The U.S. and other countries have forces stationed there as well. China's government has long cultivated its image in Africa. That's worried some in the U.S. for just as long. In 1959 the New York Times published an article entitled "Peiping's Signal Strong in Africa" that opened with "Broadcasts from Communist China in English are bombarding East and Central Africa these days with a clear, strong signal." Today, though, China's leaders feel an even greater need to reach African audiences and have ramped up media spending in order to do so.

CCTV (now China Global Television Network, CGTN) Africa opened its Nairobi headquarters in 2012. That same year, China Daily started a weekly Africa edition. Xinhua has 20 bureaus across the continent and reports from 46 countries. China Radio International has shortwave broadcasts to Africa and launched an FM station in Nairobi in 2006. As elsewhere, these outlets are now heavily reliant on internet distribution. Most of the content from these state media sources is made available to local news outlets for free or nearly free. Even so, China's media reach in Africa is still limited. CGTN has fewer viewers than its international competitors. BBC News Africa has over 23 times as many followers on Twitter as CGTN Africa, though it has as many Facebook followers and the BBC and CNN combined.

State-friendly StarTimes, a Beijing-based satellite TV provider, has been connecting African viewers since 2002. By 2019 it had accumulated 1.5 million subscribers in Kenya alone. Its prepaid base package is about $4.50 a month. StarTimes offers Chinese programming in English, but relies on programs from the Philippines, South Asia, North America and elsewhere to attract customers. It also has a "Chinese Bouquet" package aimed at the shrinking number of Chinese now working in Africa (down by a third from a peak of 263,659 in 2015).

StarTimes is key to the 10,000 Villages initiative that Xi Jinping announced at the Forum on China-Africa Cooperation in 2015. This program provides villages with a satellite dish, a digital TV or digital projector, and a solar power unit to compensate for unavailable or unstable electric service. The package includes a 20-30 channel subset of StarTimes offerings. Chinese and other outlets have tracked the progress of the initiative, most recently in Burundi.

At the 2015 Forum, Xi also announced plans to train 1,000 African journalists. A 2019 Columbia Journalism Review article included interviews with several African journalists who participated in one such program. One from Malawi appreciated the focus on the positive that characterizes Chinese domestic media coverage. She complained though that coverage of Africa in China needed improvement. A Liberian journalist noted too few in Liberia know much about China. He said that although pay for journalists is better in China, he valued the role media in Liberia plays in holding those in power accountable.

While Beijing's media reach in Africa may not match others, it it is working systematically to change that. Combined with trade and infrastructure construction, these media efforts may be working. In 2019, Pew found that people in Tunisia, Nigeria, Kenya and South Africa had much more favorable views of China than did people in Europe, Asia and North America.