China as a global power 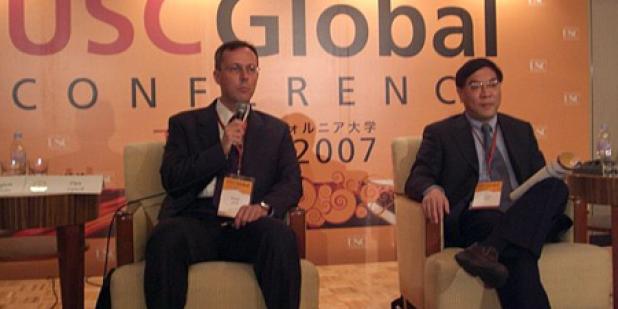 The U.S.-China Institute’s Clayton Dube moderated the session. He opened the panel by noting that China and U.S.-China relations had come a long way since 1971. That was when a Tokyo ping pong tournament helped thaw U.S.-China relations. It was at that tournament that a Chinese star, Zhuang Zedong, offered a friendship gift to Glen Rowan, an American player from Los Angeles. “Ping pong diplomacy” was launched. Dube traced China’s economic rise and outlined areas where the U.S. and China had found common ground (e.g., enormous economic exchange, cooperation on reducing nuclear tensions on the Korean peninsula) and continuing sources of friction (e.g., complaints over trade barriers, over human rights, and over Taiwan).

The panel’s opening speaker was Daniel Lynch, associate professor of international relations at USC and a member of the USCI steering committee. Prof. Lynch is the author, most recently, of “Envisioning China’s Political Future: Elite Responses to Democracy as a Global Constitutive Norm,” which is forthcoming in International Studies Quarterly, and Rising China and Asian Democratization: Socialization to "Global Culture" in the Political Transformations of Thailand, China, and Taiwan, published in 2006 by Stanford University Press.

Prof. Lynch noted that, “Whether China will democratize in the course of becoming prosperous and strong is a key question analysts are debating. The nature of China’s future political order will affect the dignity and well-being of 1.6 billion Chinese people (the total expected by 2050). A democratic China would probably be able to solve its social and ecological problems more effectively—and certainly could deal more effectively with corruption.” He argued that since democratic nations have not gone to war with each other, that “China’s democratization would also increase confidence that Washington and Beijing will resolve their differences peacefully even in the context of a looming Sino-US ‘power transition.’”

Of course, China watchers and Chinese specialists differ on whether China will democratize. Prof. Lynch reported that, “Optimists note that all countries (except oil-producing states) with a per capita GDP of $8,000 or higher are already at least partly democratic. At current rates of growth, China will achieve this level between 2015 and 2025. Optimists also point out that Chinese society is already becoming significantly more pluralistic than in years past and that this pluralism is becoming institutionalized.  Finally, they note that global norms currently specify democracy as the “normal” condition of advanced states. China is under pressure from numerous agents to yield to these norms’ specifications.”

There are, however, many who are pessimistic about democracy coming to China. Prof. Lynch noted that these observers, “point first to the fact that the Chinese Communist Party (CCP) leadership consistently vows never to permit democratization. CCP elites instead articulate the image of a future Chinese “political civilization” that is advanced and efficient, clean and effective—but still directed by the CCP. Pessimists also note that the new Chinese middle class fears democratization because it would shift significant power to the peasantry and others who have fared poorly under reform. Yet middle classes eager for political change have been crucial to democratization elsewhere.  Finally, pessimists question whether apparently global norms will survive unchanged in the wake of China’s material rise. Increasing material power gives the CCP the ability to change global norms, bending them in China’s direction.”

Will China democratize? Prof. Lynch noted that no one could be sure. But he concluded by arguing, “whether China democratizes is likely to have an enormous impact on the future shape of global society.”

Fudan University’s Shen Dingli was the next speaker. Professor Shen is Executive Dean of Fudan’s International Institute and directs the Center for American Studies. Trained as a physicist, Prof. Shen is one of China’s most influential academics on arms control matters and on U.S.-China relations. His books include Realism and U.S. Foreign Policy (2004) and Conservatism and American Foreign Policy (Sanlian Press, 2003). Prof. Shen joined the USCI Board of Scholars earlier this year.

Prof. Shen began by noting that Chinese value democracy and that democratic impulses inspired 20th century reform and revolutionary movements. He cautioned against placing too much faith in democracy as a panacea, noting that even democratic nations can enter into disastrous wars. Prof. Shen then focused on China’s status as a new global power, noting, “In the first place, China is endowed with a large territory and a giant population. The cultural emphasis on education has helped, over the centuries, produce remarkable levels of knowledge and innovation. At present, China has created a unique combination of systems employing both market forces which generates innovation and development) and centralized state control which offers efficiency and ensures state aims are realized.” Prof. Shen argued that this mix should allow China to continue to advance.

As it has advanced economically, Prof. Shen believes the country has sought stable foreign relations and followed a foreign policy based on five principles. These are, “Beijing attaches great importance to its relations with major powers, partnering with America, Russia, the EU [European Union] and Japan. It makes persistent efforts for improving relations with neighbors, focusing on Russia, Japan, India, Southeast Asia and Central Asia and so on, and is taking a more proactive role in regional security issues, primarily on the Six-Party Talks and Shanghai Cooperation Organization, and extending more collaborative stance toward neighbors in settling various disputes. China continues its traditional relations with developing countries, and is even more able to assist those in need.” And, Prof. Shen concluded, “China is increasingly engaged in multilateral organizations and agreements, finding them essential to achieving foreign policy aims.” China’s resource needs have become more pressing as its economy has grown and Prof. Shen noted that, like the U.S., China has become increasingly engaged in Africa and in other resource-rich regions.

Prof. Shen believes that China can become a global power, “if it can strike a balance between political reform and economic development, and between the need to continue to grow economically and to protect its environment and address social issues.” What is central, he said, “is the need for continued political opening and for good governance.” Prof. Shen believes that at its recent National Congress, the Communist Party leadership signaled a desire to create “a Chinese style system of checks-and-balances.”  He concluded, that “the Communist Party was created in 1921 to rid China of feudalism, warlord chaos, poverty and foreign occupation and today its legitimacy mostly depends upon successfully building legal and democratic institutions that provide both prosperity and security.”

During the discussion session, some audience members insisted that legal reform was even more pressing than democratization, arguing that legal protection of property rights and adherence to standard legal procedures would do much to improve business conditions and lives and would inspire confidence in China’s prospects. Other audience members asked about the potential for political change as older leaders step down. Both Professors Lynch and Shen expected that new leaders would be more comfortable and confident in fostering greater popular participation, but both noted that these developments would take time and were not certain to occur.