What might the Taliban's takeover of Afghanistan mean for China?
August 19, 2021
Print 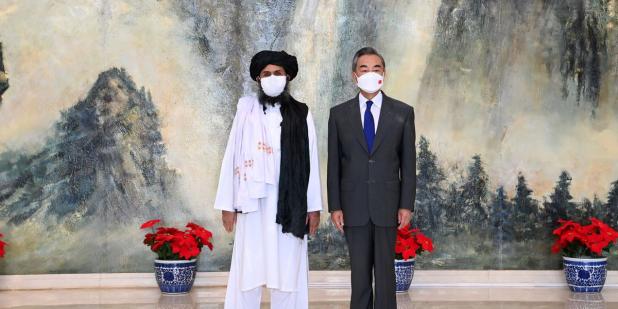 Afghanistan is at the center of news coverage, with much of it in the U.S. focused on the human and material costs of a twenty year struggle and chaotic exit. Those costs are high. Researchers estimate direct war deaths at 241,000 in Afghanistan and Pakistan and the U.S. spending at US$2.3 trillion. A recent U.S. government report put the investment in nation-building at US$145 billion. Our focus this week, though, is on China's relationship with Afghanistan.

China's Xinjiang region shares a 47 mile (76 km) border with Afghanistan (see map below). Traders and pilgrims started using the mountain passes there at least fourteen centuries ago. Fearing the infiltration of those it deems "separatists," the Chinese government has kept the border closed for years. The US$1.2 billion (2019) in trade between the China and Afghanistan flows through third countries. The Afghanistan-China air transport corridor, which has brought pine nuts to China, is not sustainable for most products. 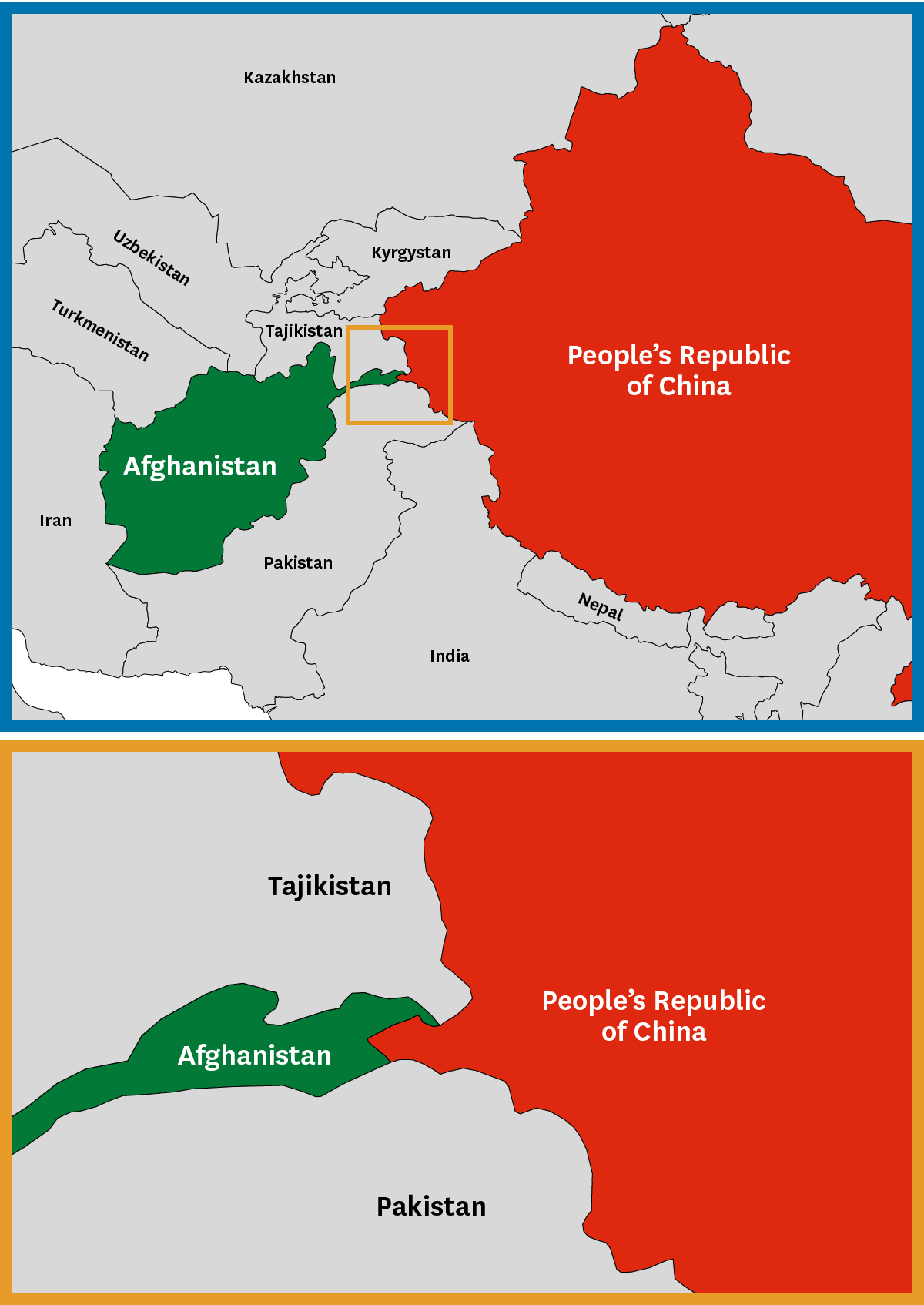 Though Afghanistan isn't a big export market for China, it is rich in minerals. Some put the value of what is in Afghanistan's ground at $3 trillion. Chinese state-owned firms were early bidders to access those resources. Two paid billions in 2007 to develop a copper mine and another won a tender in 2011 to drill for oil. Neither arrangement has been an economic success. The oil deal was with a company controlled by relatives of Hamid Karzai, president of Afghanistan from 2001 to 2014. The Afghan government cancelled it in 2018. Other gold and copper mining contracts have also been cancelled. 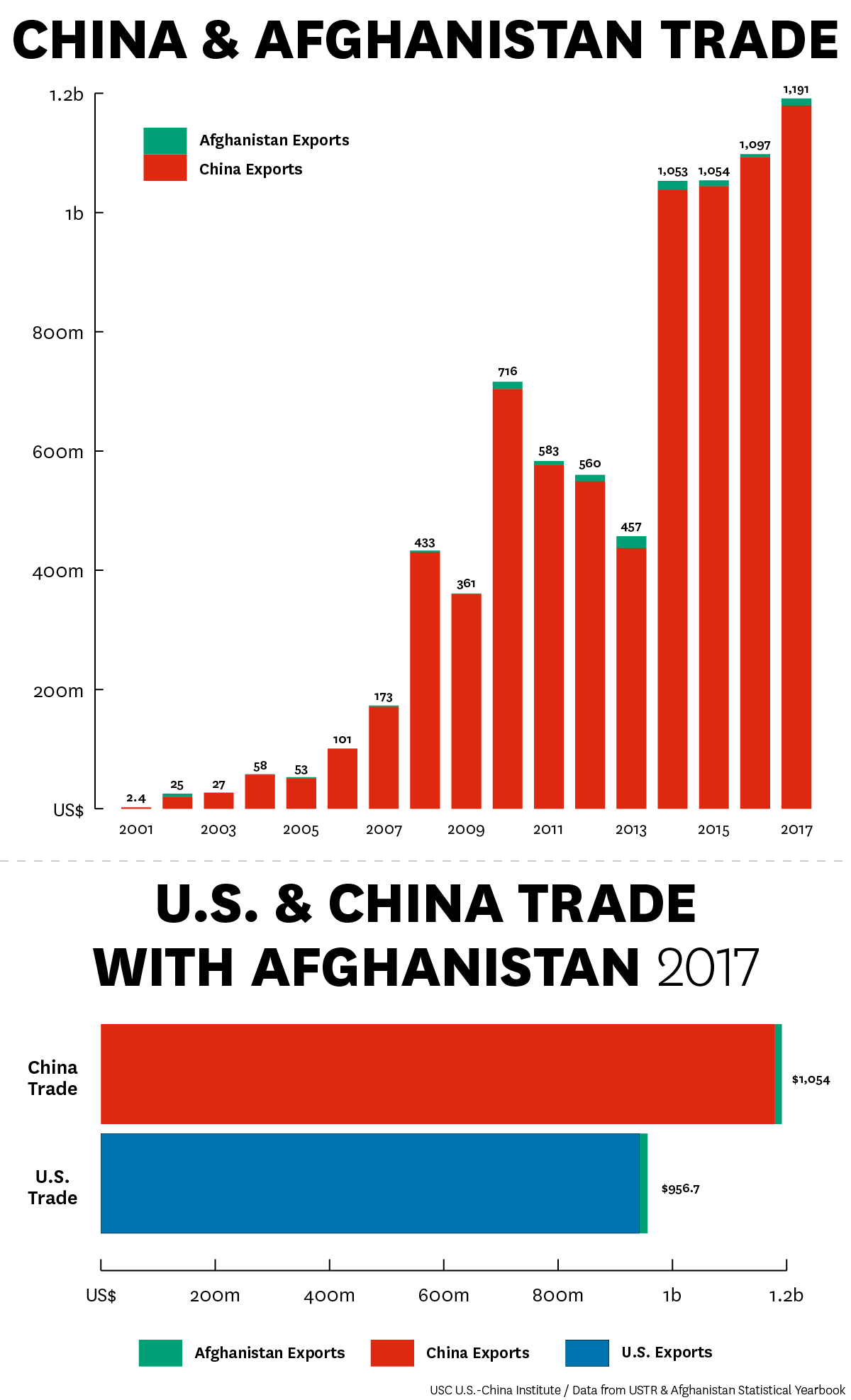 China's infrastructure-centric Belt and Road Initiative includes many projects in neighboring countries, but relatively little in Afghanistan. One link opened in 2016 links Hairitan on the northern Afghanistan border to China by way of Kazakhstan and Uzbekistan. Security problems, weak road networks and the general underdevelopment of Afghanistan have blocked other railroad plans. Pakistan offers China a much bigger market and the China-Pakistan Economic Corridor is the BRI flagship project. Poor Afghanistan-Pakistan ties under the U.S.-backed Kabul government may improve with the return of the Taliban to power, facilitating the creation of links into Afghanistan. Chinese firms have been helping build Afghanistan's road and cell phone networks.

BRI is intended to tie China together with Central Asia, but an equally important aim is to strengthen Beijing's hold on Xinjiang by developing the region and fully integrating it into the Chinese economy. Seeing security as an end in itself and a necessary condition for economic development, China's government worked with Russia and Central Asian nations beginning in the 1990s to counter U.S. influence and to "safeguard ... sovereignty, territorial integrity and social stability" while opposing interference in each other's domestic affairs. After 9/11, the group became the Shanghai Cooperation Organization, eventually adding other states. In 2014, Xi Jinping reaffirmed those aims and "pledged 'zero tolerance' for terrorism, separatism and extremism." Beijing has dramatically increased control measures in Xinjiang.

China worked with the United States and Pakistan to support the Afghan forces that drove the Soviet Union out after a decade. It watched the fluctuating U.S. efforts to create a stable bulwark against Islamic militarism. China even made minor contributions of arms and training toward that cause. But that military simply melted away. Beijing has met with Taliban leaders for years, most recently in Tianjin last month. It has limited aims for its relationship with Kabul. The central one is to persuade the Taliban to not provide safe havens or support for those opposed to Beijing's rule over Xinjiang. As USC political scientist Stanley Rosen noted in an interview with Vice, "the Communist Party will still be wary" regardless of assurances from Kabul.

Chinese media has already used the U.S. withdrawal from Afghanistan to tell the leaders and people of Taiwan they shouldn't count on the U.S. in a pinch. The rapid seizure of power by the Taliban from the U.S.-backed government, some Chinese observers contend, is just the latest indicator that America is in decline. Taipei leaders argued that as a stable and prosperous democracy, Taiwan is quite different from Afghanistan. As Premier Su Tseng-chang put it, "Only if you help yourself can others help you."

Of course, the return of Taliban control matters most to the people of Afghanistan. Will the education of girls continue? Will women be able to work outside the home? Will music and other arts be permitted? Will there be a purge of officials? Will donor countries continue to fund the government? Will the Taliban continue to rely on revenues from opium taxes and fees to fund operations? Will international organizations and non-profits be able to continue their work? While near and distant states look to see what this change signals about the state of power relations, the forty million people of Afghanistan have more concrete concerns.