Behind the Curtains: The Evolution and Impact of Asian Americans in Theatre 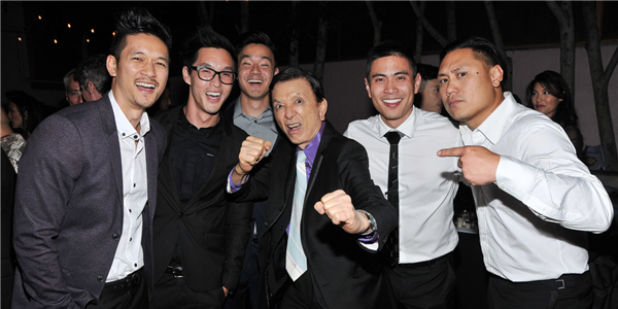 Years before Lauren Tom landed her lead role in the 1993 film The Joy Luck Club, she was developing her acting skills in Chicago and New York theatre. In an era when Hollywood was churning out slapstick caricatures of Asians, Tom recalled a much more accepting environment in the theatre scene. She describes one of the many times when she was cast as a white character: “It was funny because there was a line in that play where one character asks my character, ‘What kind of accent have you got?’ I have a Chicago accent with flat a’s, and the audience laughed along because they could hear my real Chicago accent.” But when Tom began working in Hollywood a few years later, she felt out of place as a Chinese American. “In film or TV, what you look like sometimes seems like 90% of whether you get the job. When I moved from New York to Los Angeles, it was kind of a shock to me to realize this, and to find out that the roles I was cast in were not the roles I was used to playing. I had to change my expectations.”

In recent years, Asian Americans have become increasingly vocal about the lack of racial progress in Hollywood. In the past year, Internet users have criticized films such as Dr. Strange and Ghost in the Shell for “whitewashing” roles by casting well-known white actors to play Asian characters. For Asian actors, exclusion – and even blatant discrimination – remain barriers. Hayden Szeto, a 31-year-old Chinese-Canadian actor starring in the coming-of-age film The Edge of Seventeen, recalls, “I think every Asian actor has gotten the question ‘Can you do an accent?’ at some point. Besides that, there was one time when I was auditioning for the role of a Chinese boy and afterwards, I remember the casting director muttering, ‘This boy is way too pretty to be Asian.’ He said it right in front of me."

Despite increasing discussion about Asian American issues in entertainment, the spotlight is usually directed on film and TV. But as Tom experienced, theatre is often a distinctly progressive medium that provides a platform of expression for many Asian American actors who struggle to fit in, or even enter into, mainstream media. Historically, Asian American theatre groups have facilitated diversity in other forms of media, serving as launch pads to increase representation beyond the stage.

Finding an “Artistic Home”: The Roots of Asian American Theatre

Snehal Desai is the Artistic Director of East West Players (EWP), the country’s largest and oldest Asian American theatre company. He began his acting career at Emory University in the late 90s, before the practice of “colorblind casting” became popular; experiences like Tom’s were still relatively rare. Since then, Desai has seen a shift in theatre discourse that reflects progress for minorities: “It used to be called ‘colorblind,’ which is not a reality in our world. That’s causing someone to deny a significant part of who you are and what your experiences are, so now it’s more about color-conscious casting. Whereas it used to be like, ‘I’m just going to look at you and not take your race into account,’ now it’s about taking all aspects of us and embracing them.”

EWP was founded in 1965 by a group of Asian American artists who were frustrated by the lack of roles (and the stereotypical roles that did exist) for Asians in Hollywood. The roots of Asian American theatre are entwined with the development of a collective cultural identity in the 60s, as the idea of “Asian America” emerged as a form of protest against racism. Since EWP’s founding, Asian American theatre has evolved into a tight-knit community, creating opportunities for Asians on stage and on screen. “Probably 70% of anyone that you see on TV or film who’s an Asian American actor has probably come through or worked with East West Players in some capacity,” says Desai.

Asian American theatre reached another milestone in 1988, when the Broadway production of David Henry Hwang’s M. Butterfly won the Tony Award for best play. M. Butterfly was Hwang’s critical response to Giacomo Puccini’s opera Madama Butterfly, and the play was groundbreaking for its subversion of both racial and gender stereotypes. Hwang, who interned at East West Players in college, was the first Asian American to win a Tony, and he continues to produce works that promote Asian American visibility on national stages.

One Step Forward, Two Steps Back

Although the number of roles for Asian Americans has increased since the 60’s, actors and directors still face many of the same barriers that they have grappled with for decades. In 2012, the Asian American Performers Action Coalition released a study in which they argued that Asian Americans are not part of “the trend toward more inclusive casting” in New York theatre. Their statistics indicated that “Asian American performers are the least likely among the major minority groups to play roles that are not defined by their race.” Esther Kim Lee, a professor at the University of Maryland and author of A History of Asian American Theatre, says, “We’ve made progress, and we see more Asian American characters on TV and film, but those are baby steps. Every time we go one step forward, there’s something more, like yet another yellowface controversy.”

Both on the stage and on screens, the power structures in the entertainment industry pose a challenging barrier for emerging Asian American actors. Although there are more acting opportunities opening up, there are still very few Asian producers and directors. Desai says, “One of the biggest things we fight for is being able to get in the room, to be seen. Those in power are still often white and male, and tend to mentor those who are like them… I think for all artists right now, particularly theatre artists, it’s a question of artistic home: a place where you can find residency and support to do your work, not just on a transitional basis.” Fundamentally, Asian Americans still lack representation behind the scenes, at the higher levels that produce narratives and make decisions about how to represent characters’ racial identities. Suzy Nakamura, an actress who plays a lead role in the TV comedy Dr. Ken and appeared in shows like How I Met Your Mother and The West Wing, says that until recently, “I’ve been cast with my face, but with someone else’s story. So what I think we still need to do is to get the underrepresented stories out there.”

Small, minority-focused theatre groups face another more material concern: how can they grow their audiences? Few of the theatre-goers who flock to big-budget Broadway productions hear about or take interest in alternative theatre scenes. Even beyond theatre, there is a popular perception that pieces by or about Asian Americans cater specifically to Asian viewers, and not to Americans as a whole. Desai wants EWP to fight this assumption and earn the empathy of more diverse audiences: “Through specificity, you find universality. For all of us who are minorities in this nation, we’ve been able to find something in stories where we have not seen ourselves reflected, so others need to learn to do the same… I read a newspaper review once that said something like, ‘Even though the characters are Asian American, I identify with them.’ I don’t sit there and think, ‘Even though the characters are white, I identify with them.’ It’s universal. That family in Fresh Off the Boat is just as universal as the family in Black-ish or Modern Family.”

Even within the Asian community, many younger Asian Americans are unfamiliar with the theatre scene. Phil Yu, the founder of Angry Asian Man, a popular blog that provides commentary on Asian American issues, doesn’t go to the theater often, but when he does, he often notices a lack of young Asians in the audience. He says, “The thing is that you need new people to find theatre. You can’t just have old white people watching stories about Asians: there needs to be a level of attractiveness that brings in new audiences, particularly younger Asian Americans… I went to an off-Broadway show about Bruce Lee a couple years ago, and I noticed from where I was sitting in the audience that there should be way more Asians here.”

According to Lee, some smaller theatre groups are taking the practical approach of collaborating with larger companies to increase their visibility. For example, Silk Road Rising, a small theatre company in Chicago, has partnered with the more well-known Goodman Theatre on productions about Asian/Middle Eastern American narratives. As a genre, theatre is also beginning to produce and promote work beyond the physical stage, in an effort to reach larger audiences on the Internet. In 2013, the YOMYOMF Network produced an exclusive YouTube adaptation of David Henry Hwang’s play Yellow Face.

Lee writes in A History of Asian American Theatre that from the 1990s and onwards, Asian American theatre has evolved under the influence of a new wave of younger artists who distinguish themselves from their predecessors. Unlike the generation of EWP founders who sought to increase Asian American visibility in a time when there was none, today’s emerging artists face a less straightforward racial and political climate: they are often less concerned with the number of Asian roles offered, and more concerned by the quality and depth of those roles.

Another shift has been the rising popularity of comedy, which has become an empowering mode of expression for many younger artists. This trend is evident not just in theatre, but also on TV, with shows like Master of None and Dr. Ken, and on YouTube, with comedy channels like nigahiga. Lee explains, “By using humor and irreverence, Asian Americans are able to claim their identity as Americans and as three-dimensional human beings. I think now Asian Americans are not the butt of the joke – they’re the joke makers.”

Despite frustrating setbacks, Asian Americans in entertainment remain hopeful. Last October, the Coalition of Asian Pacifics in Entertainment (CAPE) celebrated its 25thanniversary, bringing together many prominent Asian Americans in TV, film, and other media. Attendees raised over $25,000 for programs that support young Asian and Pacific Islander artists and writers.

Lee recently saw a play in New York directed by Julia Cho, a Korean American playwright, and she felt for the first time that she had seen a “real representation” of the Korean American experience. “I felt completely convinced that they were telling my story. The realness of the body – only theatre can show that, and when it’s done right, it’s the most effective way of promoting empathy and storytelling and transformation.”

In light of the recent surge in anti-immigrant rhetoric, the power of storytelling is more relevant than ever, as both a protest against racism and a celebration of cultural identity. Yu observes, “Art flourishes in times of distress and upheaval. There has to be something to react to. Rather than someone just shouting at someone else, art is something that changes minds, whether it’s a play or a movie or a YouTube sketch. Those have the power to spark conversations and change minds. When things stink politically and are even frightening like they are now, that’s when the best art comes out.”

Some Prominent Players in the Asian American Theatre Scene