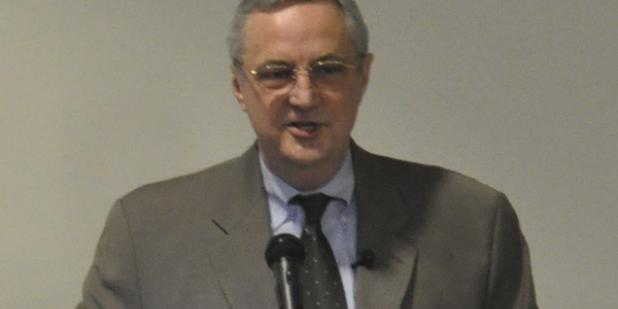 As China's comprehensive power grows domestically and internationally, so too does its global cultural presence and government efforts to enhance its international image. Are China's efforts to expand and enhance its soft power producing positive results--or is China's image abroad tarnished? In this lecture, Professor Shambaugh will discuss findings from his research in China on different dimensions of China's global cultural footprint and soft power.

Professor Shambaugh is recognized internationally as an authority on contemporary Chinese affairs and the international politics and security of the Asia-Pacific region. He is a widely published author of numerous books, articles, book chapters and newspaper editorials. He has previously authored six and edited sixteen volumes. His newest books are China's Communist Party: Atrophy & Adaptation; American and European Relations with China; and The International Relations of Asia (all published in 2008). Other recent books include Power Shift: China & Asia's New Dynamics (2005); China Watching: Perspectives from Europe, Japan, and the United States (2007); China-Europe Relations (2007); Modernizing China's Military (2003); The Odyssey of China's Imperial Art Treasures (2005); and The Modern Chinese State (2000). Professor Shambaugh is a frequent commentator in international media, and has contributed to leading scholarly journals such as International Security, Foreign Affairs, The China Quarterly, and The China Journal.

Before joining the faculty at George Washington, he taught at the University of London, School of Oriental and African Studies, where he also served as Editor of The China Quarterly (the world's leading scholarly journal of contemporary Chinese studies). He also served as Director of the Asia Program at the Woodrow Wilson International Center for Scholars (1985-86), as an analyst in the Department of State Bureau of Intelligence and Research (1976-1977) and the National Security Council (1977-78), and has been a Nonresident Senior Fellow in the Foreign Policy Studies Program at The Brookings Institution since 1998. He has received numerous research grants, awards, and fellowships -- including being appointed as an Honorary Research Professor at the Shanghai Academy of Social Sciences (2008- ), a Fellow at the Woodrow Wilson International Center for Scholars (2002-2003), a Senior Fulbright Research Scholar at the Chinese Academy of Social Sciences Institute of World Economics & Politics (2009-2010), and a visiting scholar at institutions in China, Germany, Japan, Hong Kong, Russia, Singapore, and Taiwan.

Professor Shambaugh has held a number of consultancies, including with various agencies of the U.S. Government, The Ford Foundation, The Rockefeller Foundation, The RAND Corporation, The Library of Congress, and numerous private sector corporations. He serves on several editorial boards (including International Security, Journal of Strategic Studies, Current History, The China Quarterly, China Perspectives) and is a member of the International Institute of Strategic Studies, National Committee on U.S. China Relations, the World Economic Forum, The Council on Foreign Relations, Pacific Council on International Policy, Committee on Security Cooperation in the Asia Pacific (CSCAP), The Asia Society, Association for Asian Studies, and International Studies Association.