160 Student Ambassadors will greet 70 million visitors at the Shanghai World Expo 2010. Follow their experiences at the USA Pavilion here. 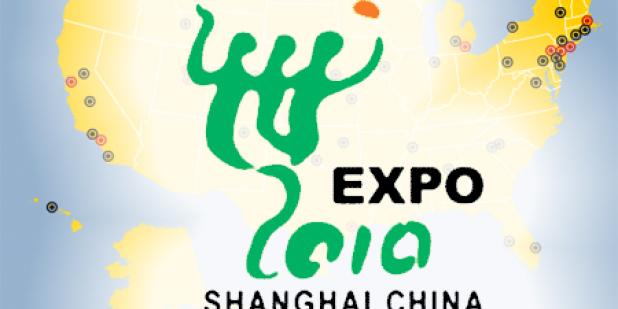 Student Ambassadors in the News

Secretary of State Hillary Clinton meets US Student Ambassadors at the Shanghai Expo. May 26, 2010

The Expo theme is “Better City, Better Life.” The USA Pavilion’s contribution is “Rising to the Challenge.” Hollywood, theme park, and Silicon Valley wizardry play a large role in the image the U.S. will present. Nonetheless, Jose Villarreal, the USA Pavilion’s Commissioner-General, wrote on April 2 at the Foreign Policy magazine website that,

“I am particularly proud that Chinese and foreign guests will be greeted by 160 Mandarin-speaking American college students working as ‘Pavilion Student Ambassadors.’ Drawn from across the United States, from schools small and large, they will add a friendly human touch to America's representation at the Expo.”

The USC U.S.-China Institute coordinated the Student Ambassador program for the Pavilion. The first group of students flew to Shanghai on April 15th. They will serve through the end of July when a second group will take over until the end of October. These students come from a variety of disciplines, but all have exemplary academic records and speak Mandarin. They have been drawn from thirty-eight states. The interactive map above lists the students selected to serve as student ambassadors. This site features regularly updated photos and notes about their experiences at the Expo and beyond.

These students will interact with a wide range of guests. Surveys suggest that most of the 70 million Expo visitors plan to visit the USA Pavilion. There they will take in musical and dance performances (jazz great Herbie Hancock is among the first to perform), visit multimedia exhibits on how perseverance, innovation and community building have enabled Americans to improve the places they live, and see how those traits are key to taking on the serious and shared challenges of the 21st century. The Pavilion will also host numerous conferences and VIP meetings. Student ambassadors will be a part of all these activities and will participate in organized trips as well as having plenty of time to explore on their own.

SECRETARY CLINTON: Well, all of your ears should be burning, because you have made such a positive impression. And I hear it everywhere, not just from Jose. I hear it from other people, as well. And I think you have really made our people-to-people connections very much a part of what our experience is trying to be, because that's our whole goal, you know. It is to create lasting connections and understanding between American and Chinese people. And you all represent that.

Now, let me ask you this. How many of you come from families where Mandarin or another Chinese dialect was spoken? So that's a pretty good number.

And how many of you just started from scratch, because you were interested in learning the language? Oh, that's very impressive. Lots of challenging days and nights, I think.

I just can't thank you enough for your willingness to do this, because it's been just an incredible addition to our pavilion and our presence here at the Expo.

How did you decide to do this? Anybody?

SECRETARY CLINTON: Did your grandmother hear about it? Good.

PARTICIPANT: I've been in China -- this is my third time here. And I lived in Shanghai last summer (inaudible) that the U.S. and China (inaudible) --

SECRETARY CLINTON: Well, you are exactly on the right note on that. What about other people?

PARTICIPANT: After Olympics -- I volunteered for Olympics.

SECRETARY CLINTON: Did you?

SECRETARY CLINTON: Good. Now, you're all living in a kind of Expo village, right?

SECRETARY CLINTON: Is that working out?

MR. VILLARREAL: That's not what you told me.

SECRETARY CLINTON: Well, yes, that's all right. All complaints go to him. Only positive reinforcement comes to me.

PARTICIPANT: How did you find the pavilion today?

SECRETARY CLINTON: You know what? I liked it. I liked it. And, believe me, I was so relieved, because it was not clear at all, when I became Secretary, that we would have a pavilion. And I thought that would not be a good representation of our country at this important time in history at this event.

You know, expositions are historical markers. I mean, we had expositions in St. Louis -- you know that old song, which I'm sure some of you sing, "Meet Me in St. Louis?" Then Chicago had a great exposition. New York had a world's fair. And it -- you know, there are too many of them around the world to be present in all of them. But there are important ones, historically. And this is an important one. And I wanted the United States to be here.

So, when I was here in November, it was really a touch-and-go situation. They had -- I guess they had some of the outer steel up, right, Jose? And so that was mid to late November. And we were wondering whether we were going to make it. And I kept telling people, "I will have to put it up myself, if you don't get it up."

SECRETARY CLINTON: So I was very pleased. I was excited. And when I went to the Chinese pavilion, many, many compliments about our pavilion, about how popular it is. I think Jose and the team told me that there were 40,000 people here yesterday. That's exhausting.

SECRETARY CLINTON: And you have to be smiling and nice and bilingual the whole time. That's very -- a very great accomplishment on your part. But people -- you know, people seem to be responding. And that makes me happy, because we want as many people to come as possible, and we want them to get, you know, some feel of who we are, as a people, for the future, for that relationship that, you know, you were talking about.

Well, enjoy the rest of your time here.

SECRETARY CLINTON: Wow, you are truly a sight for sore eyes. I can't thank you enough. I mean, things are really off to a good start, and would not be possible without all of your extraordinary dedication to making things happen.

We had a few death-defying moments, in terms of whether we would get the pavilion built, and get it ready. But all finally worked out. And I am so grateful. So let me thank you, thank you for making this a priority, and understanding the importance of the China-U.S. relationship, and how we are trying to build connections between the American and Chinese people. And I think -- have we hit 700,000? Did we hit 700,000?

SECRETARY CLINTON: Last night we hit 700,000. So, you know, that is about as good a beginning as one can imagine. And it's part of what we call public diplomacy. And every one of you is a public diplomat. So I thank you so much.