The Rape of Nanking (History Channel)

The Rape of Nanking (History Channel) 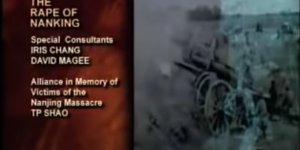 Not to be confused with the recent Amazon Prime offering, the History Channel's release, "The Rape of Nanking" offers 45 minutes of survivor interviews (both Chinese civilians and Japanese soldiers), primary source film footage, photography, as well as interviews with historians Iris Chang and David Magee.  https://www.youtube.com/watch?v=aQnBvs3LTZw   While the footage and descriptions are extremely gruesome and disturbing, it is presented in a respectful and academic manner. Nevertheless, I would not reccommend it for younger students at all. Furthermore, forty-five minutes of continuous watching of this film is actually quite emotionally draining for anyone, and I've shown two 5 minute excerpts from the film to 10th grade students rather than present the entire film. And, I have done so after having presented historic context and other evidence as part of a more extended lesson on historiography that I've amended from a Stanford History Group lesson.

Similar to a lesson I present about the Armenian Genocide earlier in the year that confronts continued Turkish denials of genocide that strain US, Turkish, and Armenian relations today, "The Rape of Nanking" also serves to illuminate the long-term effects of World War 2 on both contemporary Chinese attitudes toward Japan as well as Chinese memorialization of the events of WW2 compared to Japanese denial of the extent of their atrocities. And, along with material from this course about modern anti-Japanese sentiment in China whether it involves skirmishes in the S China Sea, embassy protests or destroying Japanese cars in fits of nationalism, the emotional intensity of China's anti-Japanese furvor is more understandable and relatable when contextualized with the extreme brutality and suffering documented in the film, "The Rape of Nanking." Certainly, this is not for everyone, but given that this atrocity had been buried in the west and denied in Japan for so long and not included in most curriculums until relatively recently, I consider it a vital element of the narrative of the turbulent, violent and brutal 20th century.