The Dragon’s Gift -- China in Africa 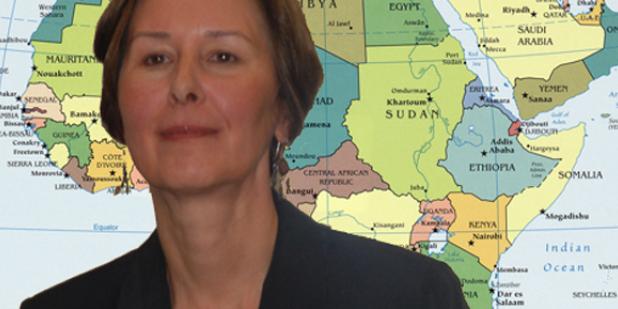 “Is China a rogue donor, or is China helping the developing world pave a pathway out of poverty?”

As the economic growth rate of the Asian colossus climbs steadily uphill, the hype surrounding China’s aid program has culminated in controversial debates among media pundits and academic circles in the past few years. Critics of China’s engagement in Africa suspect that the Chinese government is out to exploit Africa’s labor force and natural resources, even at the cost of causing potentially irreversible harm to the continent. The Chinese, however, paint themselves under a much kinder light. On January 21, Associate Professor Deborah Brautigam of American University addressed this weighty issue at the USC U.S.-China Institute.

Brautigam drew upon her new book, The Dragon’s Gift: The Real Story of China in Africa for her talk. Because of headlines about Chinese efforts to secure vital resources, this is a hot topic today. Brautigam, however, has been focused on China in Africa since 1983. In addition to The Dragon's Gift, she's the author of Chinese Aid and African Development (1998) and numerous other studies. At USC, Brautigam began by listing three popular ideas about China in Africa: that China is a new donor in Africa, that Chinese aid is uncharacteristically large, and that the Chinese government’s sole motivation for investment in Africa is to gain access to oil. Brautigam rejects each, describing them as myths.

Even though China’s engagement in Africa has only gained massive press coverage in recent years, the country has actually been involved for more than fifty years. Contrary to the belief of some, China did not pursue a policy of “build and discard” in Africa; infrastructure projects were continually revisited by Chinese teams to ensure that they were functioning. Furthermore the World Bank had misreported the amount of Chinese aid, claiming that China had provided nearly US$44 billion in aid since 1960. Closer inspection of the source revealed that the actual figure was 44 billion in Chinese renminbi, or US$6.4 billion. Although investment by China is up, official development assistance is estimated to have been at US$1.9 billion per year for the past three years. These and other detailed statistics presented by Brautigam at the discussion helped to dismiss the misconstrued accounts regarding China’s provided aid.

Thirty years ago, China was a poor country with oil that had just emerged from the Cultural Revolution. Under the leadership of Deng Xiaoping, the country recovered by allowing Japan to sell their technology in its market. In return, Japan was granted greater access to Chinese oil. Thirty years later the prevailing view of Chinese aid in Africa is that the country’s efforts are, like Japan’s thirty years ago, motivated by oil. Brautigam dispels this myth. While acknowledging that China does indeed hold interest toward oil and minerals, she suggests that the majority of grants were given to countries for diplomatic reasons. Even though China encourages resource-rich countries such as the Democratic Republic of the Congo, Ethiopia, and Ghana to leverage their resources, monetary aid was spread out across Africa to every country except Taiwan-backing Swaziland, regardless of the possession of natural or human resources. China has distributed its aid to credit-worthy governments such as Mauritius although it holds few natural resources. In addition, infrastructure contracts far outnumbered the figures for investment. The single largest investment made by China thus far was twenty percent of Standard Bank in South Africa for $5 billion. According to Brautigam, China’s main purpose in this investment was to learn from an experienced partner who develops projects in Africa. “It is the West who is concerned with ‘oil, oil, oil’,” says Brautigam. “The Chinese are interested in everything.”

Brautigam stressed throughout her presentation that the Chinese form of aid is vastly different from its western counterpart. China’s experience as a former recipient of aid and loans has influenced its thinking about how best to use aid for mutual benefit between benefactor and beneficiary. Brautigam explained that the core ideas of development found in the two regions differ in that China’s intervention is derived from its past failures in Africa. As a result, its measures are far less prescriptive than the West, focused primarily on building infrastructure and stimulating agriculture. Brautigam also stated that any harm in Chinese engagement is marginal when compared with the beneficial results.

USC Professor Carol Wise said of The Dragon’s Gift: “What this book does is really force us to resist the hype of the ‘hegemony of China’.” With the persuasive “soft power” of words and research, Brautigam has provided a new outlook on the Chinese aid program.

Heated debate continues in the wake of China’s rise to global economic giant. Critics lament the Chinese disregard for the environment and Brautigam concedes that this remains a problem in China's African projects. Media commentators see a threat looming just beyond the horizon. The notion set forth by The Economist of China as “The New Colonist” prevails. Brautigam argues that while China isn't improving working conditions in most Africa settings, it certainly isn't worsening them. It is providing employment, though it's presently impossible to know how many jobs are being created for Africans and for Chinese. Corruption among African officials is a concern, though Brautigam again doesn't see China as worsening the situation. Brautigam presents her thorough “effort to seek truth through facts” in the hopes of revealing the story for what it is—a quest for mutual benefit.

Vicki Yang is a freshman at USC pursuing a dual-degree in Business-Cinematic Arts and Psychology.