Over the last 10 years, the population of Chinese international students in the U.S. has almost quadrupled. However, drastic social change in the past 40 years has led to a chasmic generation gap between those born in the 21st century and their parents. US-China Today sat down with Zhang Tongdao, director of the documentary ‘Born in 2000’, which follows the educations, family lives, and relationships of a handful of Chinese youth. 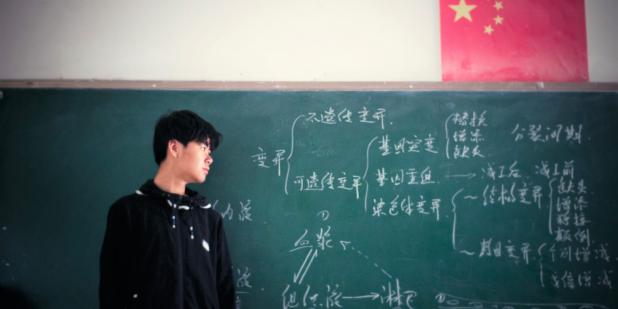 However, drastic social change in the past 40 years has led to a chasmic generation gap between those born in the 21st century and their parents. US-China Today sat down with Zhang Tongdao, director of the documentary ‘Born in 2000’, which follows the educations, family lives, and relationships of a handful of Chinese youth. 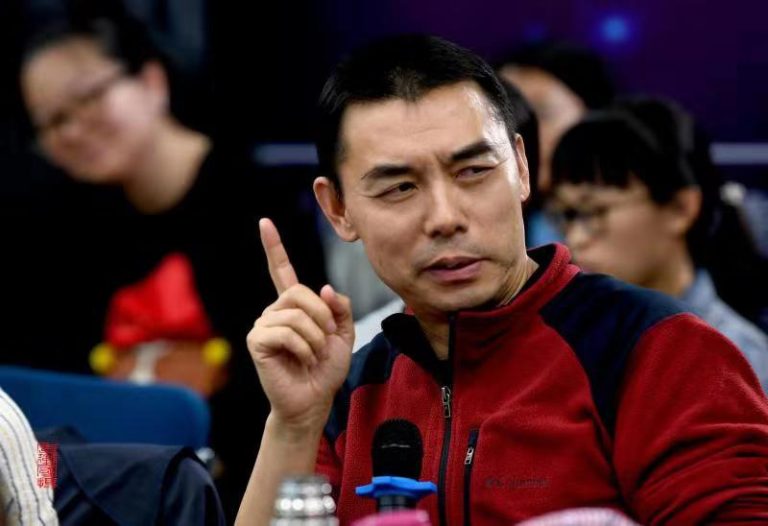 What do you believe is the meaning of this film for youth like Rosie and Ryan, who were children born after 2000 (hereafter referred to as “BA00”)? How representative are their lives of the “average” Chinese BA00?

Note: Wang Sirou and Chi Yiyang, two youth featured in Born In 2000, are hereafter referred to as Rosie and Ryan. Both of them grew up in Beijing, received private education, and went to the US to study.

But conversely, I believe that the essence of this new Chinese era is ingrained in every BA00. If your family is not rich enough or lucky enough to live in a coastal mega-city, does this film still have some significance? The answer is yes, and that is the significance of human nature and education. You may not have money to study abroad [like Rosie and Ryan did]; you may not have money for airplane; you may not have money to play football. [Yet you also share the dilemma of decision making, cross-generation communication, and problem solving, which is priceless]. …If you want to look for answers on how to get along with your children, how to find a better future for your parents … then this film is the one for you.

Based on observation of the children you filmed, what problems do you think the current Chinese traditional education system faces?

Chinese education … is generally successful. It played a major role in the advance of Chinese societies, which is the primary goal of public education in any country. For all the heroes and geniuses in China, for all country’s glorious achievements in the past 40 years, were they all contributed by returning students from abroad? The answer is no, they are created mainly by domestic college graduates. Jack Ma graduated from Hangzhou Normal University, Pony Ma graduated from Shenzhen University. Therefore, I reject the notion that Chinese education is wrong and failing. Rather, in terms of eliminating illiteracy and nurturing talents, Chinese education has played an absolutely dominant role.

Admittedly, there is room for improvement in Chinese education. … It hasn’t done enough in terms of differentiation and compatibility. But I believe this problem is universal. Is public education in US differentiated and compatible? This is an economic problem —  a shortage of teachers and plenty of students is characteristic of all public education. This is a market consequence, if you want better and more plentiful educational resources, just like the difference between economy flights and first-class flights, you have to pay more.

Through all the years since China’s Reform and Opening Up, especially in the new millennium, the development of private education has supplemented shortages of personalized public education. Rosie is an example — she never attended public schools, but became a talent at Purdue University. As I understand, more personalized education requires political advancement, specifically tolerance for difference and plurality, as well as economic advancement.

Is there a way to provide personalized education for those who are poor but talented in some areas, such as arts or sports? What can be done to utilize those talents?

This is a great question, and a social problem, not an educational one. Inequality is everywhere, and China is one of the more severe cases [of inequality]. Current institutions and rules can’t solve this problem. If you can’t follow public education, but need money to develop special talent, say piano, for example, who would buy you a piano in a poor mountainous village? That wouldn’t happen in America either. The only solution to that is communism, which requires substantial development of society and productivity. The more reasonable solution for those kids now is to try to find their place in public education and try to utilize their talents as much as possible in the meanwhile.

Chinese education is now much more pluralized or Western, as many students travel to Western countries for study. What impact do you envision this will have on our generation?

Studying abroad is an important way to facilitate cultural communication, which can’t be achieved simply by watching films or reading books. To some extent, the advance of Chinese society these days is inseparable with its fusion with Western culture. The Chinese culture is a marvelous one, but it also has deficiencies. … Our culture needs constant improvements and enhancements to adapt to modern society.

Twelve ago when I was in New York, I hesitate for a long-distance call, which cost me 9 RMB a minute. Nowadays, as long as there is Internet, I can reach any body through Wechat any time. Will I reject that just because did not originate from China? Chinese culture needs improvement, refreshment, and openness constantly. Referencing more than 4000 years of civilization, you will find that whenever China opens itself up to new ideas and things, it is strong like the Han and Tang Dynasty; whenever it cuts itself with the outside, it becomes weak like the Qing Dynasty.

With plenty of students studying abroad, it means China is becoming more open. Those students accept different civilizations; they become more tolerant. But we shouldn’t lose our Chinese roots just because we accepted Western culture. A true way to face different civilizations is to learn them while maintaining your cultural roots and Chinese identity.

There is increasing ethnic-nationalism in China now, which is an extremely dangerous thing. This is the cancer in the traditional Chinese values, one that must be erased in our path of progress or otherwise there will be no future for China. 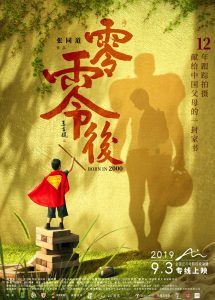 BA00 and their parents’ generation had drastically different experiences. Can you discuss this phenomenon and proposes some solutions to this generational disconnect?

My son is also BA00. There are big generation gaps between people like us. For those who were born in the 60s and 70s, many have fresh memories of suffering. I have zero tolerance for any food waste, because my generation suffered through hunger. Which Chinese BA00 has memories of hunger? Quite the opposite —  many have the problem of not being able to finish their delicious plates. I traveled abroad for the first time when I was 39. My son traveled around the world at the age of 8, and his view of the world is different from mine. … If we insist on communicating with BA00 based on memories of material suffering now, we will face enormous difficulty. Because they don’t have that experience, and all they can do is imagine. Imagination is quite different from experience.

In the film, I depict some clues for the solution. When two generations face disagreements, the way to solve it is by respect and exploration. If you don’t pressure your child, they won’t be able to resist you. The traditional Chinese social structure is hierarchical and authoritarian, and children and people follow order by their father or their rulers, often under force. But when one gets strong enough to resist the other, conflicts arise. … For two generations to live in peace, communication, respect, and openness is the only way.

In the process of deepening Reform and Opening Up Policy, markets are expected to play a decisive role in resource allocation. As a result, more private education emerges, do you think that this would further inequality and class solidification?

China has always been different; separated. Not every one in Beijing could get to top high schools in public education. Can a poor kid in the mountains enjoy the same education as people in Beijing? Equality never exists.

The problem is not aggravated by new means of education. On the contrary, I believe that modern education alleviates some problems in traditional education. Problems that used to be solved by power can now be solved with money. First-class flight seats used to be available  only to high-ranking officials and generals, but now can be purchased with money. Is that good or bad? Money doesn’t create equality, it enhances it to some extent. Inequality is a social problem, not an educational one. Because of private educations, those who can’t succeed in public education can now afford more expensive education can develop useful talents. Isn’t that good? All societies consist of elites and public. Which Western country has solved this problem with their market capitalism? … A society eliminating poverty is to reduce the conflict between rich and poor. Scandinavian countries, for example, do a good job in this. Although their publics aren’t super rich, every one of them can enjoy a high living standard. This would be very hard for such a massive country like China to achieve. China is a miniature world. …. China demonstrates the historical development of humankind, confined within a single unit of land space and shared slice of time.

Many think China is going through class solidification like the West has. Do you think that it is becoming more difficult for middle-class children to change their social status through education and diligence?

I believe this is very true in recent years. Children from rural villages will find it harder and harder to get into Peking University and Tsinghua University as they receive access to fewer educational resources than the rich. … I believe our current institutions and rules haven’t done enough to adjust the distribution of wealth effectively. The majority of Chinese wealth lies in the hands of 8% of the population, probably only 2% of the population actually. Is all that wealth all legally obtained? Fan Bingbing escaped paying 800 million RMB in taxes, and she still lives well now. What’s wrong with our rules? Why can government officials be caught with billions of assets? Why do entrepreneurs earn lots of money so easily? There are problems with our institutions. It is still possible to alter your fate with knowledge, but it’s becoming more rare. How to allocate resources based on efficiency as well as equality is the task for the government. The government aims to completely eradicate poverty by 2020, which is a good method, but not the ultimate target. The problem lies in the rules for wealth distribution, which still doesn’t have a plausible way to reform.